How 11m people are being betrayed by the dash from cash


More than ten million people are at risk of being left behind as the UK races towards a cashless society, a sobering report has found.

Our ‘dash from cash’ at the start of the Covid-19 pandemic is now thought to be irreversible, with half of us using fewer coins and notes than we used to.

But a comprehensive review of cash use in the UK, funded by ATM network Link and published by the Royal Society for Arts, Manufactures and Commerce (RSA), warns of problems ahead. 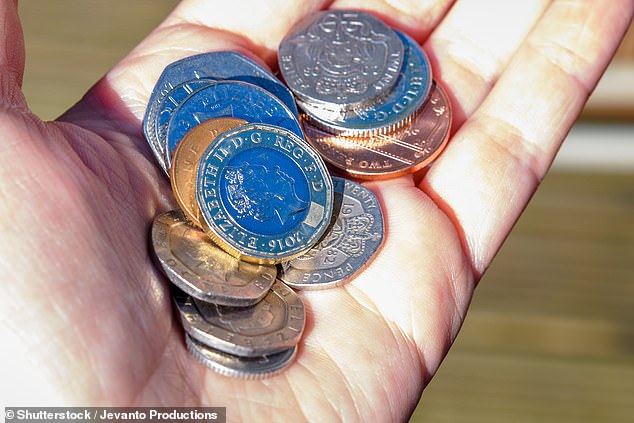 Cashing out: Britain’s ‘dash from cash’ at the start of the Covid-19 pandemic is now thought to be irreversible – with half of people now using fewer coins and notes than they used to

Its authors found millions of the most vulnerable people are at risk of spiralling into debt, becoming isolated from others or losing trust in the financial system altogether.

While this month marked two years since Rishi Sunak pledged to introduce new laws to protect cash, few have materialised so far.

The Chancellor’s promise came a year after the authoritative Access to Cash Review called on the Government and regulators to step in ‘urgently’ to ensure cash remained ‘viable’.

Despite this, banks have closed more than 1,259 branches nationwide since 2020, according to the consumer group Which?

Last Wednesday, Lloyds confirmed it would close a further 60 branches. This followed HSBC’s announcement earlier this month that it plans to close 69 branches — one in seven in its network.

Which? data shows that while banks shut 369 branches in 2020, another 736 were axed in 2021 — a 99 per cent increase and the second-highest number of branch closures in the past six years.

With eight months remaining of 2022, 154 branches have already been shut, with another 244 set to close before the end of the year.

Jenny Ross, Which? money editor, says: ‘Accessing cash and face-to-face banking services is hugely important for millions of people so it’s very alarming that bank branches are closing at such a rate.’

The latest report found that nearly half of UK adults believe a cashless society would be ‘problematic’. It estimates that 11.5 million people, a fifth of the population, would ‘struggle to cope’ without coins and notes.

Meanwhile, just one fifth of UK adults were defined as ‘cashless converts’ — holding a strong preference for card and contactless payments.

The report authors wrote: ‘While a cashless society would feel like progress for some, for millions it would lead to anxiety, economic exclusion, isolation, exploitation, debt, rising costs and major concerns over privacy, security and control.’

In the early days of the pandemic, cash withdrawals plummeted by about half, amid fears that coronavirus could be transmitted via coins and notes. 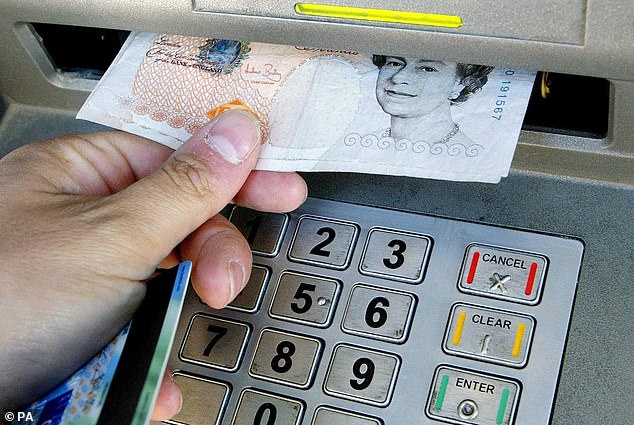 In the early days of the pandemic, cash withdrawals plummeted by around half what they had been, amid fears that coronavirus could be transmitted through coins and notes

Research commissioned by the Bank of England would go on to prove that the risk of catching Covid-19 in this way was low. However, several major restaurant and cafe chains are still turning cash-paying customers away.

French food chain Côte Brasserie says it is safer for its restaurants to only take card payments ‘due to a reduction in local banking facilities’.

The report also found that people in deprived areas still take out the most cash from ATMs.

On average, cash withdrawals fell by 46 per cent in the south of England, while in two of the most deprived constituencies — Liverpool Walton and Bradford South — they dropped by just 16 per cent and 20 per cent respectively.

The researchers also found that 15 million people use cash to budget. Link chief executive John Howells says: ‘For those living on tight budgets, there is no better alternative to notes and coins and they are in no rush to turn to money management tools.’

Industry-led schemes continue to offer some hope for those who use cash. Eight more ‘banking hubs’ shared by High Street branches are set to open, and payments service PayPoint is rolling out purchase-free cashback across more than 2,000 stores, allowing people to access cash from shops without buying anything.

But the report continues to stress an ‘urgent need to introduce legislation’ to ensure cash access across the country.

Cash payment options for essential government services, such as school dinners, council tax and utilities, were also called for in its recommendations.

Report author Mark Hall, of the RSA, says: ‘It’s vital that the dash to digital doesn’t disenfranchise anyone, especially with the cost-of-living crisis putting such strain on family finances.’

A government spokesman says: ‘We are committed to protecting access to cash across the UK.

‘That’s why we have consulted on plans for new laws to make sure people only need to travel a reasonable distance to pay in or take out cash, and have already legislated to enable shops to offer cashback to customers without them having to make a purchase.’

Could I last a week without using plastic? 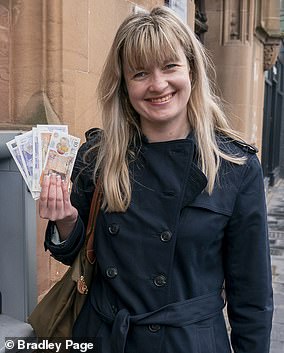 Ready for a spree: Money Mail’s Fiona visits the ATM

Ask anyone who prefers to use cash over cards and they will have similar tales. Bank branches are closing, ATMs are charging fees and coins and notes are being turned away at tills.

I wanted to find out how this increasingly marginalised population manage day to day, so I went cash-only for a whole week. And it was not long before I was treated very differently.

A Tube from East Putney to my office in Kensington usually costs me £3.20 with a debit card, the same with a ‘top-up’ Oyster card. But a single ticket costs £6.30 — a 97 per cent premium.

At trendy smoothie bar Joe & The Juice, a barista turned away my £10 note. ‘Sorry, we don’t take cash, unfortunately,’ he told me while pushing down on a noisy blender.

More often I was told that I could pay with cash, but was made to feel like a burden for doing so.

Staff at fashion store French Connection would take my cash — but only the exact change.

After fumbling through shrapnel for what felt like hours, I left empty-handed. When other staff took my coins and notes, I spotted a fair few grimaces.

In the early days of the pandemic, cash was refused over fears it could spread Covid.

But despite the Bank of England research proving this risk was low, some clearly still view cash as highly contagious.

No wonder people who shun cards and contactless fear being unable to cope in a cashless world.

Even today, they are payment pariahs.

harrry
Previous article
Can we use cosmetic display boxes for promotional services?
Next article
MAGGIE PAGANO: How your weekly shop’s going to potash