The Bank of England followed through with a widely anticipated interest rate hike on Thursday as it attempts to tackle soaring inflation, which it now says could exceed 8 per cent.

The BoE’s Monetary Policy Committee voted 8-1 to raise the rate by 25 basis points to 0.75 per cent, with just one member – Jon Cunliffe – preferring to retain the rate at 0.5 per cent.

But the Bank’s ratesetters are not expected to respond aggressively to rising inflation and follow in the footsteps of the US Federal Reserve, which said it may raise rates another six times this year following its own move upwards overnight.

Dampening expectations for rapidly climbing rates in the UK, the Bank of England said: ‘some further modest tightening in monetary policy may be appropriate in the coming months’, but warned ‘there are risks on both sides of that judgement depending on how medium-term prospects for inflation evolve’. 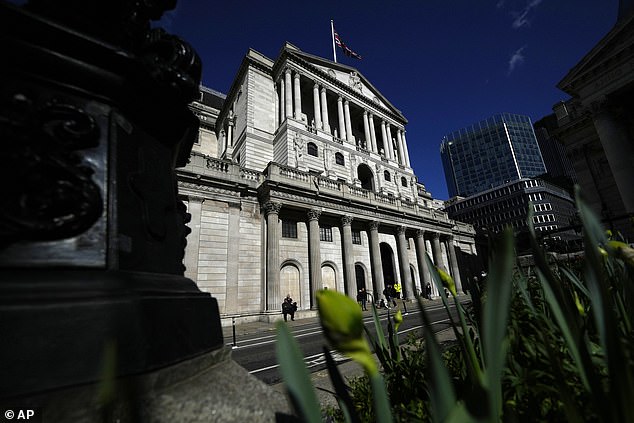 What is happening to inflation?

The bank warned that its February forecasts for inflation and economic growth will need to be reassessed as the outbreak of the Ukraine war worsens the outlook for both.

The BoE initially forecast inflation to peak at around 7.25 per cent in April 2022 before settling back to the bank’s 2 per cent target in two years’ time.

However, the BoE warned on Thursday that the invasion of Ukraine ‘has led to further large increases in energy and other commodity prices including food prices’.

It said: ‘Inflation is expected to increase further in coming months, to around 8 per cent in 2022 Q2, and perhaps even higher later this year.’

Meanwhile the war is also ‘likely to exacerbate global supply chain disruptions’ and increase ‘the uncertainty around the economic outlook significantly’.

UK GDP in January was stronger than expected in the February Report, offering optimism about the health of the British economy post-Covid.

‘Consumer confidence has, however, fallen in response to the squeeze on real household disposable incomes,’ the BoE said.

‘That impact on real aggregate income is now likely to be materially larger than implied by the projections in the February Report, consistent with a weaker outlook for growth and employment, all else equal.’

The Bank of England said: ‘The MPC will review developments in the light of incoming data and their implications for medium-term inflation, including the economic implications of recent geopolitical events, as part of its forthcoming forecast round ahead of the May 2022 Monetary Policy Report.’

The FTSE 100 was up 0.4 per cent within half an hour of the announcement, rising from a loss of 0.1 per cent at midday.

Meanwhile, the FTSE 250 is flat, held up by bank stocks benefiting from rising rates.

How high will base rate go?

The base rate is expected to rise again this year but most economists and analysts  are not forecasting a move beyond 1.5 per cent.

This is due to concerns that a sharp rise in rates over a relatively short period could seriously impact the economy, affect borrowers and make the cost of living crisis intensify.

However, she echoed the bank’s sentiment that the Ukraine war will weigh on growth.

Scholar said: ‘While we are yet to see the GDP figures reflecting the period since the onset of war, consumer confidence is already deteriorating and will lead to slower growth down the line, while inflation is likely to push higher for longer, possibly peaking later this year rather than next quarter.

‘While the Bank of England is ahead of the pack as the first mover, it is still behind the curve, prompting serious concerns about the prospect of a recession or stagflation.

‘The central bank has the unenviable task of attempting to control supply side inflation with demand side tools, without inadvertently creating a recession.’

Senior analyst at Freetrade Dan Lane suggested the bank’s estimate of inflation rising to 8 per cent could be underplaying the severity of price rises to come and the impact on UK households.

He said ‘Even if inflation doesn’t hit double figures this year, it could get very close to that level and the recent energy price shock only adds to the BoE’s balancing act. UK workers won’t have forgotten how hard Covid hit many of their finances and shelling out for petrol and heating oil might just plunge them back into caution mode.

‘The difficult thing is how quickly this has come about and how little time we all had to prepare. We all thought the tail end of Covid was the only thing to worry about until the past few weeks.

‘Even if the UK household savings ratio ramped up over the pandemic, those pent-up cash piles have normalised now so the country has less firepower to deal with cost of living increases. While the rate rise might provide some limited relief for savers, higher mortgage rates and rising inflation this year could mean challenging times for many of us ahead.’

With regard to the impact on financial assets, UK chief investment strategist at BlackRock Investment Institute Vivek Paul said: ‘We maintain our neutral stance on UK gilts. We believe UK yields will not rise as fast as US equivalents, in part because market expectations for further UK tightening are still overdone.

‘Bonds are losing their diversification benefits, and we see investors demanding greater compensation for holding them amid higher inflation and larger debt loads, in our view.

‘We are neutral on UK equities, and see large-cap UK stocks as broadly fairly valued rather than materially cheap.’