How much higher than 5.5% will UK inflation go and what’s the impact?

Consumer price inflation beat expectations once again in January, with the UK’s annual rate rising to a near-30 year high of 5.5 per cent, as the cost of living crisis continues to intensify.

The Bank of England may hike interest rates for a third consecutive Monetary Policy Committee meeting in March in an efforts to tame the rate of inflation, which it nonetheless expects to hit 7 per cent by April before gradually normalising.

But experts warn the BoE’s expectations could be dealt a blow by unpredictable changes within energy markets, which could drive price rises beyond forecasts and above the central bank’s 2 per cent target for some time.

And CPI headed even higher than expected could unnerve investors already worried by the return of persistent and high inflation after many years of concerns over deflation leading to central bank largesse. 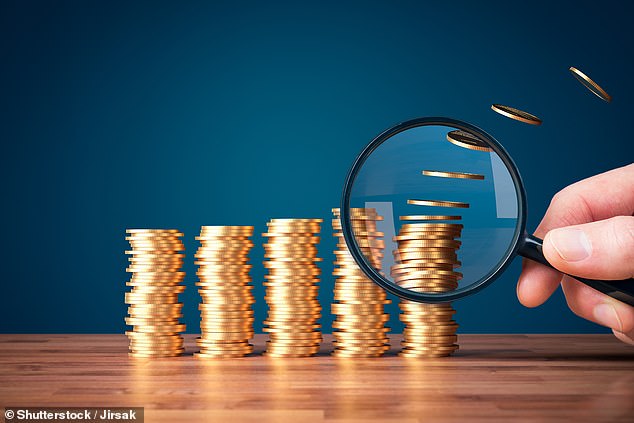 How high could inflation go?

HSBC is forecasting that inflation will soar further due to painful energy price rises before peaking at 7.25 per cent in April – the highest level since August 1991.

Fixed income manager at Aegon Asset Management James Lynch goes further, warning that the impending change to the Ofgem energy price cap in April means the prospect of CPI heading ‘over 7.5 per cent…can now not be ruled out’.

He added: ‘In terms of a Bank of England interest rate move, March was always a done deal for a rate increase even before this number.

‘The question now is how much the BoE want to raise interest rates and how quickly.’

Investors have in recent years settled into the world view that central banks will do everything they can to keep interest rates low.

Reassurances from the Bank of England and US Federal Reserve that inflation was likely to be transitory have now shifted to concerns over it and desire to raise rates sooner, quicker and by a larger extent than expected. Even the European Central Bank is expected to turn more hawkish. 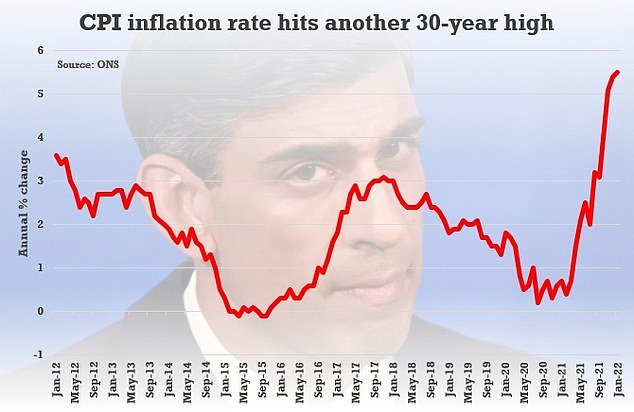 The headline CPI rate nudged up to 5.5 per cent in January from 5.4 per cent the previous month, with clothing and footwear costs adding to the burden.

Energy prices have been a key driver of inflationary pressure over the last year, as supply chain issues and surging post-Covid demand has put up costs for wholesalers, businesses and consumers.

The situation could worsen still, as analysts at Cornwall Insight forecast the potential for the default rate to hit £2,300 by October 2022.

The impact of energy prices on inflation is complicated further by the ongoing tensions on the boarder of Ukraine and the threat of an impending Russian invasion, which has pushed oil prices higher. 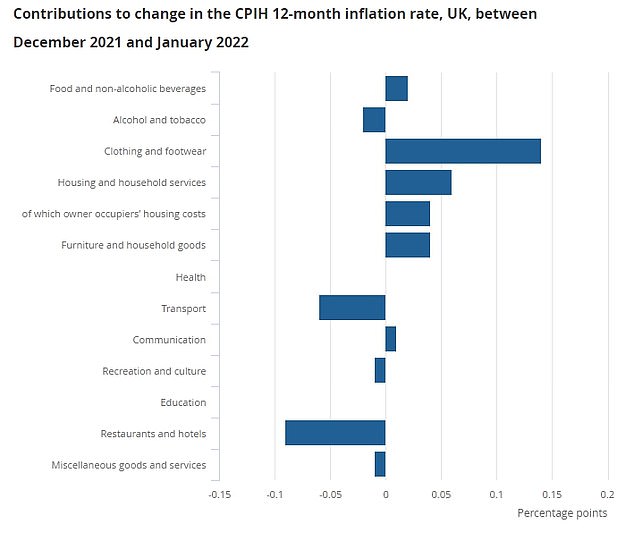 The ONS said the cost of clothes and footwear pushed inflation higher last month, with the lowest January discounts in shops since 1990

Chief investment officer at BRI Wealth Management Dan Boardman-Weston said: ‘One of the largest contributors [to inflation] continues to be the price of fuel and this hasn’t been helped by the ongoing escalation between Russia and Ukraine.’

He added: ‘The data continues to point towards another few months of rises in the rate of the inflation but we expect this to ease by April or May.

‘Given the strength of the labour market and the overall economy, it seems inevitable that the Bank of England will continue down the path of further rate rises.’

Despite worries over the energy spike, the biggest contributor to 12-month inflation in January came from clothing and footwear, which increased the rate by 0.14 percentage points between December 2021 and January 2022.

Head of FX analysis at Monex Europe Simon Harvey explained that while the impact of clothing and footwear was due to comparisons with January 2021, when the UK was in lockdown, this ‘doesn’t tell the complete story’.

He said: ‘The reduction in clothing and footwear prices last month was in fact the smallest decline in prices since 1990 in the ONS’s constructed historical series.’

Harvey added that core goods inflation ‘is likely to continue contributing heavily to the rising headline inflation rate in the UK as retailers pass on higher producer prices to consumers’.

What does this mean for our money?

High inflation is affecting people’s spending power, their income and their wealth – all of which are tied together.

In terms of spending power, it means that £100 from a year ago would only buy £94.50’s worth of the basket of goods now.

Inflation is already eating away at workers’ pay, which shrank when adjusted for inflation in late 2021, data from the Office for National Statistics shows.

In this context, savers may wish to turn to investing in order to protect their wealth from being eroded further by inflation, but that brings its own risks of losing money if investments fall in value.

Senior personal finance analyst at interactive investor Myron Jobson said: ‘Inflation erodes the purchasing power of cash, which is compounded by the fact that many banks have been slow in passing down the increases in the rate of interest to savers – if at all.

‘If you’re planning on putting money aside for five years or more, it is worth considering the stock market instead.

‘While it fluctuates on a day-to-day basis, when smoothed over time, a well-diversified portfolio can offer a sensible way to help beat inflation. Even a middle of the pack fund is likely to compare favourably with cash over the long term, so you don’t need to be an expert stock picker to benefit.’

How does inflation affect investors?

The most obvious impact of inflation on stock markets has been on high-flying  growth stocks.

When inflation is high and rates are rising, investors typically become less willing to pay up for the uncertain promise of profits growing in years to come and are keener to invest in the certainty of companies making profits now.

Explaining how investors are reacting to rising inflation, Bestinvest’s Holland said: ‘Bond yields have moved much higher in recent months and growth sectors – such as technology stocks – that were the winners of recent years have taken a real battering since the start of the year as their sky high valuations get reassessed against the prospect of tighter monetary policy and greater uncertainty about the valuation of projected future earnings in today’s money.

‘In contrast, unloved banking shares have a spring in their step as rising interest rates hold out the prospect for much higher profits to be made on lending activity.

‘After years in the doldrum, overshadowed by tech and online businesses, Old Economy stocks are fighting back.

These are all sizeable sectors on the UK stock market, which has enjoyed a much stronger start to 2022 than the US or global equities generally, reversing the pattern of recent years when it has been a bit of a laggard because of its low exposure to areas like technology.

‘Investors who have shunned the UK market in recent years, might therefore reassess this.’