A symbol of optimism, positivity and informality, yellow has long been an interiors staple, prized since ancient times for its warming properties.

It was particularly prevalent in the 1980s, but then went out of fashion as neutral tones took over.

‘One of the most iconic yellow rooms was the one decorated by tastemaker Nancy Lancaster at 39 Brook Street in the 1950s,’ says architectural historian and eco-paint specialist Edward Bulmer. 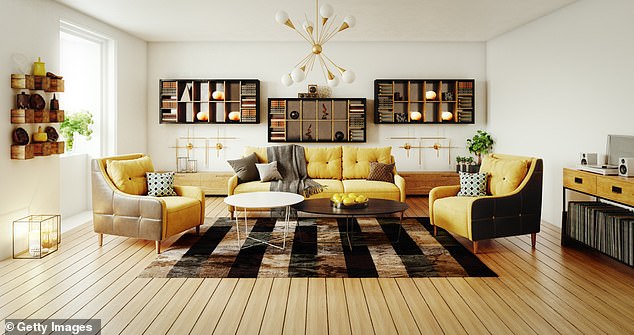 Colour happy: Yellow furniture lifts the mood and has been prized since ancient times for its warming properties

‘Its success was in the way the colour was applied, being built up in glaze over a white ground colour. It’s still inspiring to this day.’

However, with so many tonal variants, yellow can be a tricky shade to work with. Whether you are introducing it via soft furnishings or paint, there are ways to get this famed sunshine bright just right.

‘Why? They are almost gold-like, with all the richness of the metal but without the bling, and they make a space feel grounded.

‘Ochre is a good option: not a true yellow and not really brown, it’s probably the most forgiving tone to select.’

Pops of yellow are a good way to experiment — sofa.com has just reported a 102 per cent growth in sales of sunshine-hued fabrics, resulting in two new colours this season: Nefertiti Gold cotton matt velvet and Ochre easy cotton, so investing in an upholstered piece is an informal way to work the look. 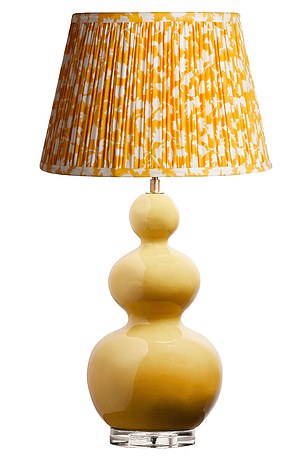 Consider what tones work best where: ‘Fresh lemon yellow looks beautiful when added to a Scandi-style monochrome scheme via accessories such as cushions, rugs and lighting or even mixed with other bright, fresh colours in small areas,’ says designer and paint specialist Timna Rose.

‘It’s great for fun, energetic rooms such as kids’ bedrooms or dining areas. I also love to use fresh neon yellow in living rooms.

‘On the other end of the scale, you can be more daring with warmer tones, such as Turmeric and Indian Yellow.

These suit a feature wall or even a whole south or southwest-facing room.’

However, a good rule of thumb is to treat this tone as you would the sun — have it around but make sure you can withdraw from it from time to time.

‘That’s why I like to select elements of it for a scheme rather than fully ‘sunbathing’ in it,’ says Roby Baldan.

‘My preference is for softer shades of yellow on walls and ceilings and deep or bright shades for accessories.’

If you’re working yellow into the bones of a scheme, whether paintwork, walls, shutters, kitchen cabinetry or bathrooms, the key is to pay attention to its nuances.

‘Halls and passages work well with ochre-based tones while a bright mineral yellow can articulate the volume of a living room to great effect,’ says Edward Bulmer.

‘Just bear in mind that starved of light, yellows can seem a bit green to the eye.

‘There are, however, ways to make this hue look contemporary: juxtaposed with clear white, it looks fresh and confident. Deep and slightly tobacco-like shades can lend a chic, suede feel to a room, especially if you tie it in with a complementary trim.’

Citron-coloured fittings are a retro-cool choice for bathrooms and kitchens, but if that feels like a step too far, try tiles instead.

Shutters and doors in yellow provide a pleasing framework.

Yellow shutters are available at California Shutters, from £186 sq m.

Sometimes a few considered sunbeams are all it takes to channel this relaxed vibe.

Upcycled silk curtains such as those by Stitched in Empire Yellow lend easy elegance, while Pooky’s Murphy table lamp and Yellow Tulasi shade, from £179, add a perfect sunshine hit.

3 Qualities of All Successful Businesses

Difference between Python and C++