How to fight inflation’s effect on your spending, income and wealth 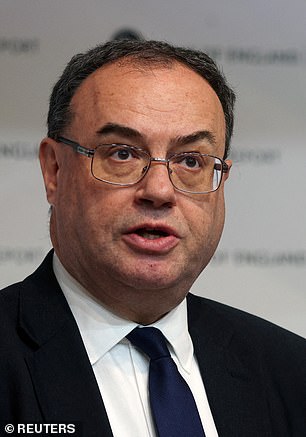 Inflation pain: Try to avoid asking for a pay rise, advised Bank of England boss Andrew Bailey from the lofty position of a near-£600,000 salary

The Bank of England has warned inflation is going to top 7% this year – and if its track record is anything to go by that might be an underestimate.

For some the cost of living crunch is a real issue, as they are already struggling to make ends meet and have no idea how they can cope with even higher prices.

Others will be able to stomach the inflationary surge’s effect on their spending, but will be far more concerned about its potential harm to their savings.

The only hope is that central banks turn out to have been right in the first place and the inflation spike is transitory.

In the meantime, however, what can people do to try to beat inflation’s nasty attack on their spending power, income and wealth?

If the inflation element is inevitable, one way to look at this problem is to identify what you’d need to offset the impact.

There is little opportunity to avoid inflation with our spending – the price of pretty much everything seems to be going up – and unfortunately the main damage is being done in essential spending.

But if you can’t avoid stuff costing more, can you avoid paying for it in the first place?

At the nub of this lies two questions: how much would you need to avoid spending to offset inflation – and can you do that?

Obviously, spending is highly individual and depends on your household. However, the average UK household spent £588 per week in 2020, according to the most recent ONS figures, which exclude mortgage interest payments and council tax.

That’s £2,352 per month, which seems a lot, but it includes everything, such as discretionary spending on socialising etc.

Based on that number and 7% inflation, a household would need to not spend a £165 each month to stay on the level.

That’s a hefty figure and might be best managed weekly, where it equates to £41. Break it down further and the question becomes can you save a tenner a week on four things?

Sadly, most people are not going to be getting 7% wage increases this year and that means a cut to their income in real terms (as adjusting for inflation is known).

They won’t have been reassured by Bank of England boss Andrew Bailey advising them from the lofty position of a near-£600,000 annual salary to not ask for a pay rise.

So how can you keep pace? Well you could ask for a pay rise, whatever Mr Bailey says, but let’s say we do ignore that element, in which case the average earner needs to pull in an extra £183 per month.

This is far from easy and will require some time and effort, but fortunately getting paid for your time has got easier in the digital age.

Earning a bit of money on the side doesn’t require getting a second job, it can also involve some lateral thinking.

You might have skills or expertise someone will pay you for a few hours per week’s effort for, or you could do a bit of wheeling and dealing – selling stuff you don’t need, or even buying things and selling them on.

If you can make £46 extra per week then you’ll keep pace with inflation’s erosion of the average £31,000 wage.

It tells you how you can make money now, starting with what’s already in your house. It’s an entertaining read that can boost your income with real, practical tips and no ‘get rich quick’ nonsense. 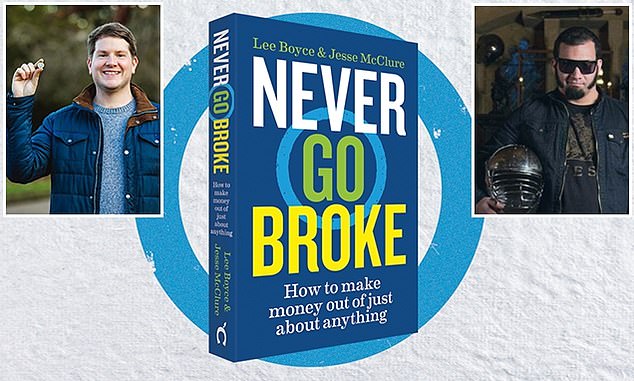 Inflation hits our income and spending power right now, but over the long term it’s even more corrosive to our wealth.

Savings accounts with interest rates below 1% aren’t much help and history shows that stock market investing is the best chance of beating inflation over time.

This doesn’t need to mean taking big risks with all your savings, but you may need to take some risks with some of the pot.

A stock market portfolio could return 7% a year in dividends and share price growth, but that’s a big ask

You must keep an emergency fund in cash and be wary of investing anything you’ll need in the short term, but beyond that high inflation means making your money work harder.

A combination of dividends and share price growth from a well-diversified portfolio could potentially deliver a 7% a year return, but that’s a big ask and by no means guaranteed.

Nonetheless, it’s likely that on average over a period of at least five years, investing will get you closer to protecting your wealth than pitiful savings account interest.

The UK stock market has been a laggard in recent years, but despite that the FTSE All Share has delivered an annual average total return of 5.4% over five years and 6.8% over three years. (A time period which includes the Covid crash when the market lost a third of its value in early 2020).

Ideally, investors will adopt a far broader portfolio that just investing the UK stock market and a low-cost global tracker fund is a good starting point.

Beyond that people may want to try to pick individual shares, funds or investment trusts they think will beat the market, but it’s worth bearing in mind that the conditions that made certain investments do well in recent years may be different now.

> Read a guide to how to start investing here 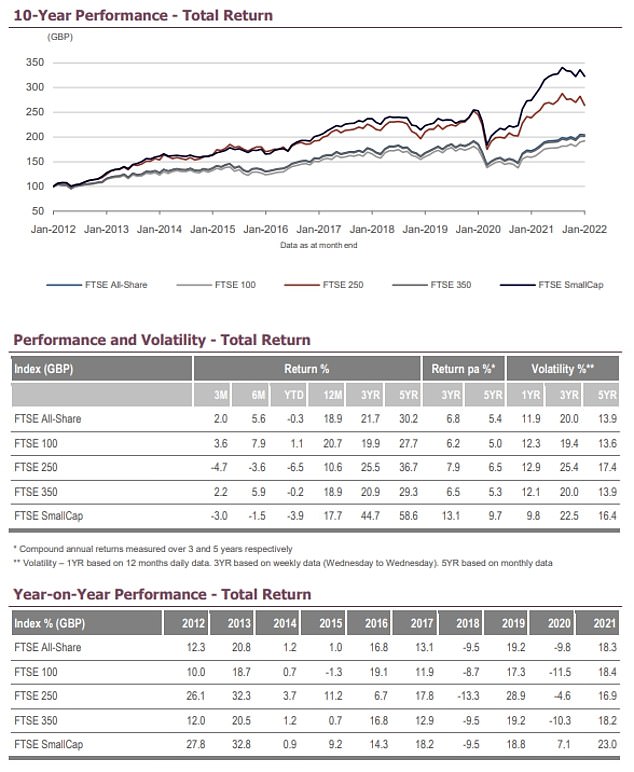 The UK stock market is a laggard in global terms, but even despite that it has managed to deliver an average 5.4% return over five years. The tables above break down the performance of the main UK stock market indices