Inflation in the eurozone has hit a new record high as the cost of living crisis sweeping the world intensifies.

Official figures showed prices in the single currency bloc rose by 7.5 per cent in the year to March – the biggest increase since the euro was launched more than two decades ago.

Global living costs are soaring as the cost of everything from energy and fuel to food and building materials rises in the aftermath of Covid, and as war rages in Ukraine. 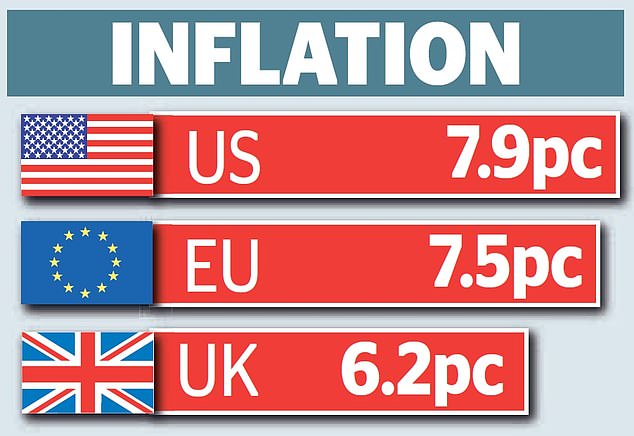 Christian Nolting, chief investment officer at Deutsche Bank Wealth Management, said: ‘The rhino in the room has been unleashed and may now prove difficult to stop.’

And separate reports showed manufacturers in the eurozone and Britain endured their worst month for more than a year in March.

The double-whammy of rising prices and slowing growth has raised fears that the global economy faces a dangerous bout of stagflation.

Despite fears that economies are weakening, central banks are under pressure to raise interest rates to bring inflation back under control.

Analysts said that upbeat jobs figures published in Washington yesterday paved the way for more hikes in the coming months.

Official figures showed US unemployment fell to 3.6 per cent in March as the number of those in work rose by 431,000.

The European Central Bank has yet to raise rates but now faces the biggest inflation shock since the single currency was launched.

Joachim Nagel, president of the Bundesbank, Germany’s central bank, said the inflation figures ‘speak for themselves’ and has called for ‘timely counter-measures’.

But the economy is slowing with the S&P Global purchasing managers’ index of manufacturing activity in the eurozone hitting a 14-month low last month. The index hit a 13-month low in Britain.

‘The end of the opening quarter saw a marked growth slowdown in the UK manufacturing sector,’ S&P Global said.

‘Rates of growth have cooled markedly amid sanctions, soaring energy costs and new supply constraints linked to the war.’