Is Musk plotting a takeover at Twitter after buying a 9.2% stake?


Elon Musk has wasted no time imposing himself on Twitter after becoming its largest shareholder.

A day after it emerged he had snapped up a 9.2 per cent stake for £2.2billion, he was yesterday appointed to the board where he will have influence over strategy and direction.

Musk is a maverick and no stranger to controversy, so the shake-up at the social media platform over the coming months will be dramatic. 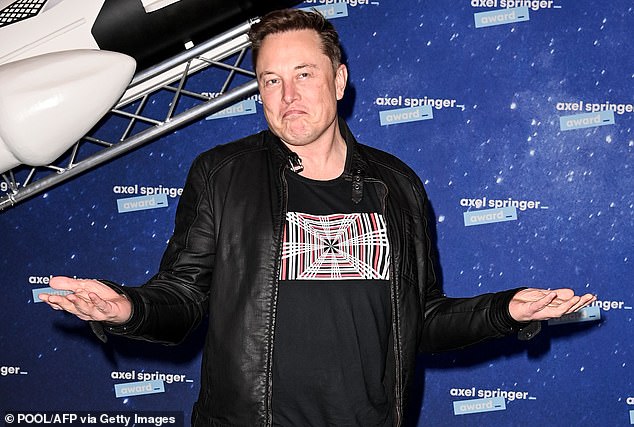 Twitter took the world by storm in 2006 but has since come under criticism for its Left-leaning politics and banning of political figures.

Bruce Daisley, a former Twitter vice-president, said: ‘Twitter has underperformed in the last ten years on price compared with other tech stocks. It has left itself open.’

Yesterday, Musk flexed his muscles, asking his 80million followers to vote on whether there should be an edit button on the platform – much to the dismay of new Twitter chief executive Parag Agrawal.

Almost three-quarters of the 3million-plus respondents voted ‘yes’, forcing Agrawal to tweet: ‘The consequences of this poll will be important.

Please vote carefully.’ An edit button would give users a few seconds in which to change a message – something Twitter has traditionally been against.

Agrawal welcomed Musk to the board but the two have history.

In December the entrepreneur compared the Twitter boss to the former Soviet Union dictator Joseph Stalin.

Russ Shaw, founder at Tech London Advocates, said: ‘He’d need the backing of the board but his first move could be bringing in his own guy. What a statement that would be.’

Neil Wilson, of Markets, believes Agrawal, who was made chief executive in November, is in for a rough ride as Musk views himself as the de facto head of the company.

‘What is clear is Musk already thinks he’s running Twitter,’ said Wilson. ‘Agrawal is going to have to deal with this.’

Debate is raging about where Musk will take Twitter, and he has been fiercely critical of its approach to free speech – and even suggested setting up his own platform.

The view is that Musk wants to bring the site back to its early libertarian days. There are even suggestions Musk might look to lift the ban on Donald Trump, who was kicked off the platform following the Capitol riot on 6 January 2021. 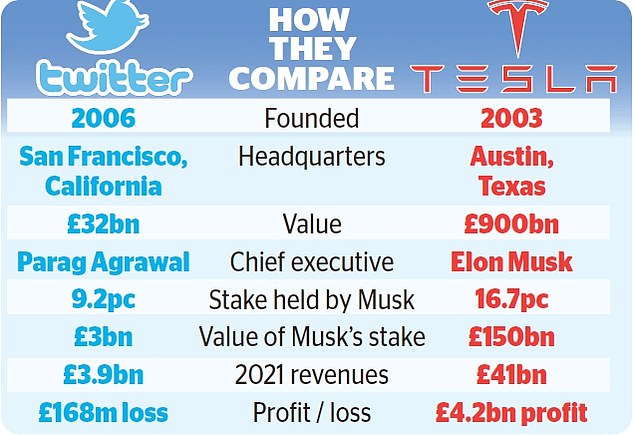 Errol Webber, who is a Republican party candidate in California, tweeted: ‘Time to get this platform back to its former glory.

Step one – bring back President Trump! Step two – give everyone who has been banned a second chance. Step three – end all forms of political and other censorship.’

Musk has described himself as ‘half Democrat, half Republican’. He is seen by many observers as socially liberal but fiscally conservative, publicly smoking marijuana in 2018, and dancing at business events.

He has previously attacked Democrats such as Bernie Sanders over high tax policies on corporations and wealthy individuals. Last year Musk said he would be moving Tesla’s headquarters from California to Texas, citing the lower tax regime.

He has donated to both the Republican and Democrat parties. Shaw said: ‘He leans Right on many issues, especially on taxation. Twitter is centre-Left. But there’ll be a lot of different political views among the top executives at Twitter.’

One thing is for sure – Musk will make his views known.

He is the largest investor with a 9.2 per cent stake, buying around 73.5million shares that have already jumped £800million in value to £3billion.

After joining the board, Musk agreed not to increase his stake past 15 per cent until 2024, but tech experts believe his aim is to own it outright.

Wilson said: He is annoyed at the Twitter algorithms, the censorship and he wants to change it. He’ll make an offer in the next few years.’

Interestingly, similar to Trump, Musk has a love-hate relationship with Twitter. In 2020, he tweeted that ‘pronouns suck’ – a slight to non-binary and trans people who put their pronouns in their Twitter bio.

Musician Claire Boucher, better known as Grimes, who has two children with Musk, responded: ‘I love you but please turn off ur phone. I cannot support hate. Please stop this. I know this isn’t your heart.’

The pair have since split.

The South African-born father of seven is also locked in a legal battle to free himself from a deal he made with US regulators in 2018 and regain control over his tweets.

The agreement forces him to have his messages about Tesla pre-approved by a lawyer to avoid breaking rules around the disclosure of market sensitive information.

Musk had tweeted that he had secured funding to take Tesla private at £325 a share.

And in 2018 he called a British caver who helped rescue trapped Thai schoolboys a ‘pedo guy’.

A US jury in 2019 found that Musk did not defame caver Vernon Unsworth.

How this all ends no one can predict, but the next few months are set to be quite a ride.

Dan Ives, analyst at Wedbush said: ‘Now it’s time to get out the popcorn and watch the developments over the coming months with Musk on the board.’

Clash with US regulator looms

Elon Musk could be in hot water with the US financial regulator again after failing to disclose his stake in Twitter in time.

US law says anyone with more than a 5 per cent stake in a listed company must disclose their purchase within ten days.

Musk acquired Twitter shares on March 14 but did not say so until April 4 – 21 days later.

That could lead to a penalty of more than £100,000. Musk also made market-moving comments about Twitter, after his purchase, without disclosing his stake.

On March 25, Musk tweeted a poll: ‘Free speech is essential to a functioning democracy. Do you believe Twitter rigorously adheres to this principle?’ A day later, Musk said that he was giving ‘serious thought’ to building a new social media platform.

In 2018, the Securities and Exchange Commission (SEC) sued Musk for tweeting he had ‘funding secured’ to take Tesla private.

A judge later ordered an attorney to approve Musk’s tweets before he publishes them.

Professor Adam Pritchard, at University of Michigan Law School, said: ‘He acquired it and didn’t file within ten days. It’s a violation. And so this is a slam-dunk case from the SEC perspective.’

harrry
Previous articlePetrol prices: March worst month ever at the pumps
Next articleHow RBS abandoned a loyal employee after she fell victim to scammers