Is now a good time to shell out on Big Oil?


Breaking up is hard to do, even when it’s the right thing, as BP and Shell are discovering.

Both the oil giants are making a retreat from Russia, leading a mass exit of other businesses. BP is selling its 20 per cent stake in Rosneft, the Kremlin-backed oil group, while Shell is disposing of its 28 per cent holding in the Sakhalin-2 Liquefied natural gas project controlled by Gazprom, another mammoth energy player.

There is unqualified shareholder assent for these, which have been spurred by the invasion of Ukraine and represent some of the first steps in the economic decoupling of Russia from the West. 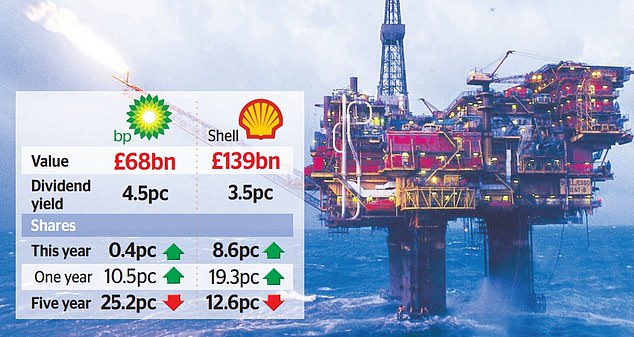 But there is still concern about the implications.

Investors who have BP or Shell shares may wonder whether this is also the moment to quit, or whether the symbolic importance of the departures could be greater than their financial impact, given that high oil prices mean more cash flowing into the coffers.

Shell and BP are the mainstay of many portfolios and a key constituent of many funds, particularly those aimed at income-seekers. Investment trusts like Aberdeen Standard equity income, invesco Select UK Equity, JPMorgan Claverhouse, Law Debenture, Merchants, Temple Bar and Ruffer (where I am a holder) all own shares in both.

But it seems unlikely that any fund will wish to be rid of either BP or Shell. Thomas Moore, manager of ASI Equity Income Trust, argues that the departures from Russia may not inflict permanent pain on the pair.

He says: ‘The stock market has more than reflected this hit in the share prices of BP and Shell, yet it has not so far factored in the benefit of tightening oil and gas markets to their profitability.

‘BP and Shell are set to play an important role in reducing Europe’s dependence on Russian oil, through their conventional oil and gas assets and their investment in energy transition.’

He continues: ‘Both stocks are trading on highly attractive valuations. We remain very positive on the prospects.’

Moore’s views reflect a wider reassessment of the prospects for BP and Shell sparked by the Russian news.

BP’s bill for the Rosneft split could be as high as $25billion (£18.9billion). It is not clear who could purchase the stake, as the war in Ukraine has made international investment in Russia impossible. Any deal would be struck at what broker Jefferies calls a ‘material’ discount – a bargain basement price, in plain English.

The relationship with Rosneft was lucrative; in 2021 BP made profits of $2.4billion (£1.8bn) from the shareholding and $640m (£484m) in dividends. But this should be viewed in context of the $23.6billion (£17.9billion) generated by all operations, which may be why Goldman Sachs rates BP as a buy.

The farewell to Russia could be a boost to both groups’ planet-friendly credentials, dispelling some of the greenwashing claims that beset Big Oil.

Third point, a US activist investor, is putting pressure on Shell to split off its refining and other legacy divisions from its renewables arm. Under a Dutch court ruling, the company must also slash its carbon emissions by 2030, rather than by 2050 as originally planned.

The goodbye to Gazprom may add further impetus to Shell’s transition into hydrogen, solar and wind. it is less clear whether either company could benefit from a push to increase domestic supply of energy, whether of the clean or dirty variety.

The company has not been known as British Petroleum for some time, but is now ramping up investment in the UK. Bernard Looney, the chief executive, said earlier this month that for every pound he makes in the UK this decade, he is investing more than two in this country.

This expenditure will be focused on renewables. at present ministers are backing offshore oil and gas production, but seem reluctant to allow further north Sea exploration to bolster the UK’s energy security.

Both BP and Shell are set to be generous to shareholders this year. BP is expected to pay out £3.3billion in dividends, which is 4 per cent of the payouts from the FTSe 100, while Shell is distributing £5.5billion which represents 6.5 per cent, according to data from broker AJ Bell.

Both plan share buybacks. Looney says BP has the capacity for a $3billion buyback, based on a $60 oil price, so it could be more.

Ben Yearsley of Shore Financial Planning says these payouts should not be a stretch: ‘The oil price is $113 and both groups have spent the last two years reducing their cost base and debt, so that shocks can be overcome more easily than before.’

The consensus seems to be that for investors to break with BP or Shell would be a short-termist decision. Yet this week’s events are a reminder that oil is a political business. They are also a reminder that uncertainty and investing are inextricably linked, especially now.