‘It’s time to sell Boots,’ says one half of billionaire couple who own chemist

Growing up near Genoa in Italy, the young Ornella Barra dreamt of being a doctor. Never for a moment did she imagine she would one day become one half of the most powerful business couple on the planet.

Today, she is chief operating officer international of pharmacy giant WBA, whose empire includes Boots the Chemists, which is up for sale – probably to private equity.

Her long-term partner is the legendary dealmaker, Italian billionaire Stefano Pessina, who created Walgreens Boots Alliance and is its executive chairman. When the pair are not globetrotting for work, they live together in Monaco. 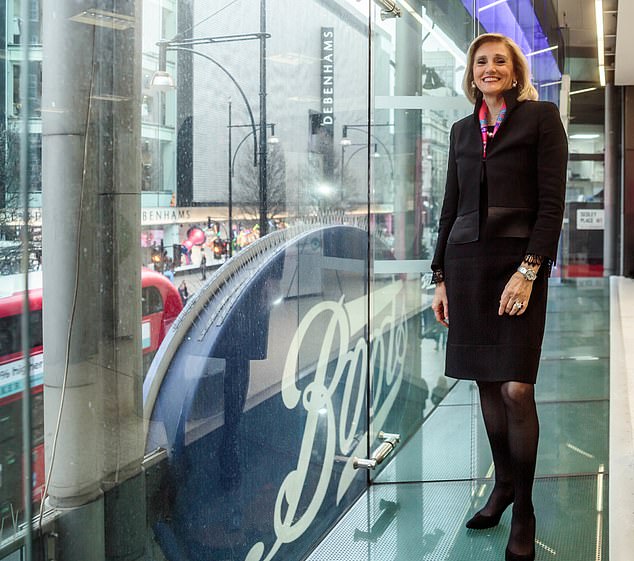 Hard to say goodbye: Ornella Barra may retain a seat on the board of Boots after a sale of the pharmacy

Barra is taking a lead in management presentations to possible buyers for Boots, including British private equity firm TDR, backers of the billionaire Issa brothers, who own Asda. Other potential bidders are US buyout barons at Apollo, and rival firm Sycamore Partners. A consortium of Bain Capital and CVC Capital did not put in a first round bid.

Ironically, considering her future success, Barra was dissuaded by her family from pursuing a career in medicine on the grounds it would be too hard to reach the top.

‘I wanted to become a surgeon, but 50 years ago it was not the best profession for women, because it was male-dominated,’ she says. Instead, she studied pharmacy at the University of Genoa – a decision that led her to cross paths with Pessina.

In the near 40 years of their extraordinary professional and personal partnership, the couple has created a healthcare and pharmacy business spanning the US, Latin America and Europe.

Now they have hoisted a ‘for sale’ sign over Boots, after 16 years of ownership.

Despite the sale, Barra, 68, claims a deep affection for the British chain, saying: ‘I love Boots. I like the way it is close to the community. Eighty five per cent of the UK population is within ten minutes of a store. This reflects my DNA as a pharmacist.’

A devotee of the No7 serums, which have developed a cult following among British women, she also recommends the Dual Defence cold remedy to anyone she meets with a sniffle. And she is, she says, ‘very, very proud’ of staff during the lockdowns.

There is speculation that it might not be a final farewell to Boots and that WBA may, in fact, keep a minority stake – and Barra a seat on the board.

Be that as it may, ownership of Boots has not been an easy ride. Sales were hammered in the pandemic. Though it was allowed to trade in lockdown, as it was classed as an essential retailer, fewer people came into city centre stores.

The company has been forced to announce 6,000 job cuts, one in ten of the workforce, in the past couple of years.

Even before Covid devastated footfall, like other traditional bricks and mortar retailers, Boots had to manage a big store estate, with some shops in the wrong place or too close to another branch. Some 200 stores have been earmarked for closure. And while 19 new stores have opened in prime locations and others have undergone impressive refurbishments, some still look dowdy. Boots has been up against competition from online operators such as Amazon, and from supermarkets, which have expanded into personal care and toiletries.

High hopes to transform No7 from a British bathroom cupboard staple to an international superbrand have not yet fully borne fruit. Boots remains a much-loved and trusted name, and the latest online sales figures for the first quarter of the company’s financial year – the three months to November 30, 2021 – almost doubled compared with the same quarter just before Covid struck. The digital business, in which Boots has invested more than £70million in three years, is booming.

Total retail sales in the same quarter are up 16.3 per cent on the same period the year before. So why sell the 2,263 store-chain now?

‘We started a very big reorganisation in Boots to shape the company in the right way, to develop three important pillars, healthcare, pharmacy and beauty,’ says Barra. ‘The team and I have worked on creating the right foundations for growth over the past three years. Now it is in good shape. It is the right time to go into a new era.

‘WBA decided to focus particularly on the US and on healthcare, and it is difficult to manage everything. It is important in life to make choices.’

The first big disposal came last year, with the sale of wholesaler Alliance Healthcare for £4.6billion. Boots is next on the block, with an estimated £7billion price tag. The business has previous experience of private equity ownership. In 2007, Pessina, who now owns 17 per cent of WBA, teamed up with KKR in what was then Europe’s largest ever leveraged buyout, financed by £10billion of debt. The deal immediately stoked fears of asset-stripping and unsustainable borrowing, which for once proved unfounded.

Boots became part of a much larger group, teaming up with American chain Walgreens. Despite the controversy over ‘pandemic predators’, Barra argues that another stint in private equity custody will be good for the retailer.

‘I remember the very interesting time from 2007 to 2014 with KKR. Boots had a very good experience,’ she says. She is, she adds, highly aware of the need to find a responsible buyer, given the unique place that Boots occupies on the UK high street and in the healthcare system. Paramount in her mind, she says, are the 51,000 employees. ‘We will be very careful. A buyer that will be responsible towards the employees, for me that is the priority,’ she says, with an Italian cadence. English is her fourth language after her native tongue, French and Spanish.

Many small UK shareholders might like to see Boots returning as an independent business to the UK stock market.

Initially, she says, they considered floating Boots in an Initial Public Offering (IPO). ‘At the beginning we had the idea of an IPO, but we didn’t start the process because the offers came in,’ she says. So is an IPO off the table? She replies: ‘In the style of WBA, everything is on the table.

‘If the offers are not in line with our expectations we could come back to an IPO.’ At this time, however, that looks unlikely.

Barra met Pessina, 80, in 1984 when she was looking for a business partner, not a romantic one.

It was the start of an enduring relationship, built on a mutual addiction to work.

‘It is easy because he is the architect and I am the engine,’ she says. ‘Stefano is the deal maker. Then, when you finish a deal, it is important to develop the business, to create a common culture, to work with the team. This is my job.

‘He is the boss in professional life. We have a very strong complementary relationship and a very good understanding.’

Both sound like complete workaholics. One associate says: ‘You can call any time, day or night, except on a Sunday before 2.30pm. It’s the only time they rest.’

Her job as chief operating officer involves overseeing all of WBA’s businesses outside the US.

‘Before Covid I lived on a plane,’ she says. Vacations don’t exist in her world.

‘For me a holiday means working for five hours in the day and after that maybe have dinner,’ she explains. ‘But it is not a job for me, it is a pleasure. I work with a lot of passion. People talk about stress, but personally I don’t know what it means.’

One of Barra’s proudest moments was in January 2015 – ringing the bell on the Nasdaq stock market in New York to celebrate the merger of Boots and Walgreens. ‘It was emotional. I remember, it was snowing, it was cold, but I didn’t care, it was a fantastic day. If you ask me whether, 50 years ago, could I imagine this – no.’

Her advice for others who are aiming for the top is one that runs against the orthodoxy that women – or men – can have it all.

‘Be prepared to make sacrifices, because you can’t do everything in life,’ she says. ‘It is about choices. I don’t spend time in the gym or in a spa.’

In pre-Covid times, walking around WBA stores chatting to staff and checking the shelves meant she didn’t need the gym anyway. ‘I did my 10,000 steps,’ she laughs.

Her advice? ‘Support your colleagues and take support from them. Avoid conflict and jealousy. And it’s important to remain calm. Not every problem is a disaster.’

harrry
Previous article
Are You There God? It’s Me Margaret Trailer Brings Blume Classic To Life
Next article
Shell boss has pay cut after a string of gruesome deaths