Jaguar Land Rover has struck a deal with US video game processing leader and artificial intelligence proponent Nvidia to put its next generation cars on the road towards self-driving autonomy.

Under the new partnership, experts from both companies will jointly develop  intelligent autonomous driving, safety, and connected services for all future and increasingly electric Jaguar and Land Rover vehicles.

As a result, the first new JLR cars in 2025 will have ‘Level 2-plus autonomy’ – which includes steering and brake support – and a move towards Level 3, which gives the car itself control in limited circumstances, though the driver must take over again if prompted. 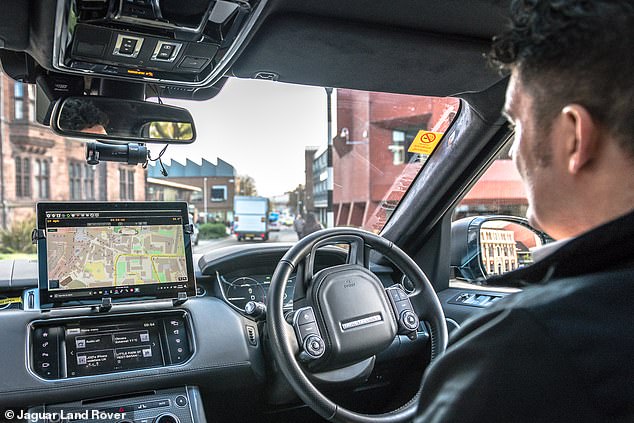 Driving ahead with autonomous tech: Jaguar Land Rover has partnered with a US gaming software giant to help co-develop its self-driving features 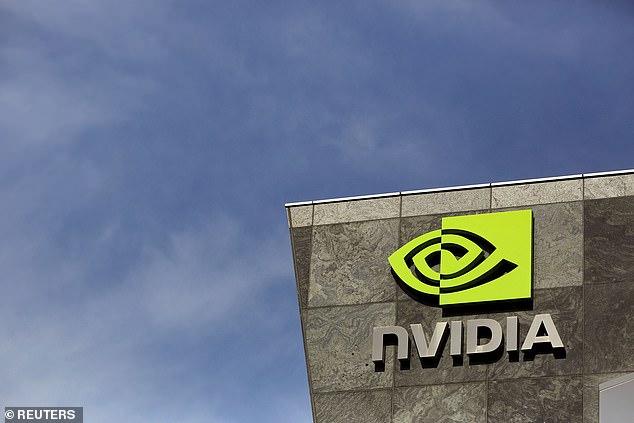 Nvidia has built a specialism in high powered graphics processing units for computer gaming and professional use and recently abandoned an attempt to buy UK chip designer Arm.

The ‘highly automated and self-driving features’ will cover active safety, automated driving and parking systems as well as driver assistance, they said.

But the speed at which they can progress to greater autonomous driving will depend on the legal framework in three years’ time, they said.

Inside the vehicle, the hi-tech ‘NVIDIA DRIVE’ system will deliver artificial intelligence, or AI, features including driver and occupant monitoring, as well as advanced visualisation of what is happening around the vehicle in terms of other vehicles, pedestrians, and cyclists, speed limits and traffic flows.

Nvidia vice president automotive Danny Shapiro told This is Money there are similarities but also key differences to the video gaming world: ‘We’ve created the real world inside the brain of the car.

‘The central computer from inside the car takes in data from the surroundings from sensors all around the car.’

It is scanning for other cars, pedestrians, cyclists and other things on the road such as traffic lights and speed limit signs. 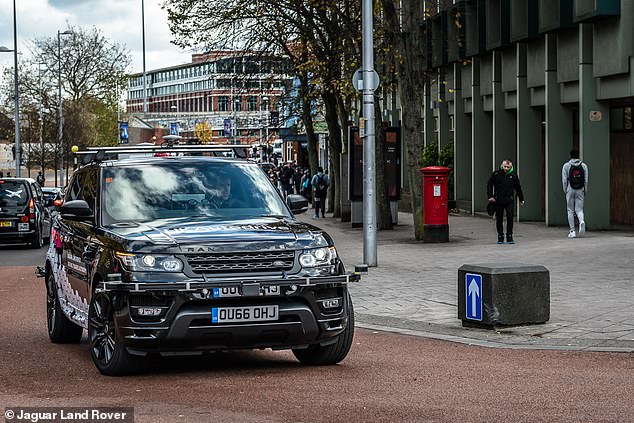 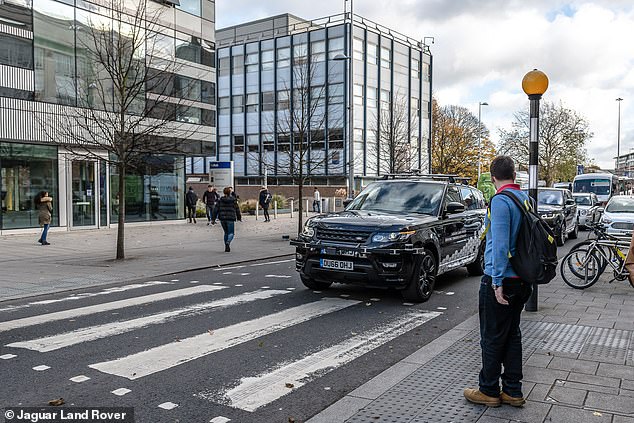 Shortly after, it will move towards Level 3, which gives the car itself control in limited circumstances, though the driver must take over again if prompted 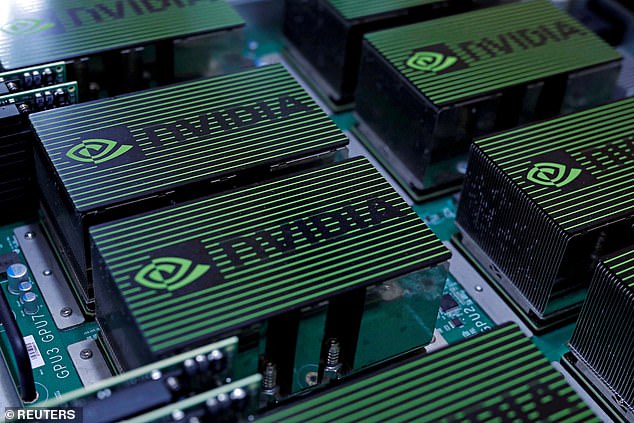 Technology in JLR cars will scan for other vehicles, pedestrians, cyclists and other things on the road such as traffic lights and speed limit signs

‘The car makes intelligent decisions moving from A to B and follows the law,’ said Mr Shapiro.

‘You can think of it as being inside a video game. But it’s far different from a video game because there are real lives on the line. We have to deliver our passengers’ safety.’

He explained: ‘Data needs to be collected and ‘trained’ to tech the autonomous system how to drive. It gets better and better throughout its life.’

But he said: ‘These cars will be capable of doing things we’ve not even thought of.’

US tech giant Nvidia is best known to online gamers for its claim to have invented in 1999 ‘the world’s first GPU’ or graphics processing unit, which sparked the growth of the PC gaming market and redefined modern computer graphics, high performance computing and artificial intelligence now used in transport, healthcare and manufacturing.

A ‘GPU’ is a specialised electronic circuit designed to rapidly manipulate and alter memory to accelerate the creation of images displayed on devices such as mobile phones, personal computers, workstations, and game consoles.

He explained that ‘highly automated’ cars are able to drive themselves in certain limited circumstances, such as on a motorway, and changing lanes.

Fully autonomous cars are a bigger step and will take an occupant from A to B without a driver ever touching anything.

JLR will roll out the levels of autonomy ‘as it is deemed safe for its customers,’ said Mr Shapiro.

In relation to video games he stressed: ‘We don’t make the video games, But we do make the software for developers to make the games. We provide all the building blocks.’

In the same way, it will work with JLR to create dedicated software for its cars: ‘How they develop it will be unique to JLR.’

Jaguar Land Rover will also use the AI technology for in-house training and to create ‘real-time physically accurate’ simulations of challenges facing cars with self-driving features – such as braking and steering to avoid a ‘child running out from between parked cars’.

Like a mobile phone, each car’s software can be ‘perpetually updated’ over the air, meaning they remain always up to date. This ‘will enable the delivery of innovative assisted and automated driving services throughout the life of the vehicle via over-the-air software updates.’

The ability of new car owners to add many new apps for services will also create new ‘revenue streams’ to increase earnings and boost profitability, the firms said.

Bosses made comparison with the smartphone revolution, pointing out how in the early days there were just a few apps to choose from and add to the phone, compared to now when there are thousands. The same set to happen with apps for hi-tech cars in the next phase of the digital revolution, they said.

Francois Dossa, JLR’s executive director of technology strategy said: ‘Safety is key. We want 100 per cent safety.’ He stressed that Nvidia was a partner, not a supplier: ‘We’re developing this together.’

He said it was a ‘leapfrog’ in automotive technology, noting that ‘Level 2-plus into Level 3 autonomy was ‘exactly’ what they were aiming for: ‘We are transforming JLR to become a true global digital powerhouse. We will generate new revenue streams. Profitability is important.’

There are two elements at the heart of the NVIDIA DRIVE automotive software system: DRIVE Orin is the AI ‘brain’ of the car and runs the Jaguar Land Rover operating System, while DRIVE Hyperion is the ‘central nervous system’ network that collects and circulates the data from sensors. 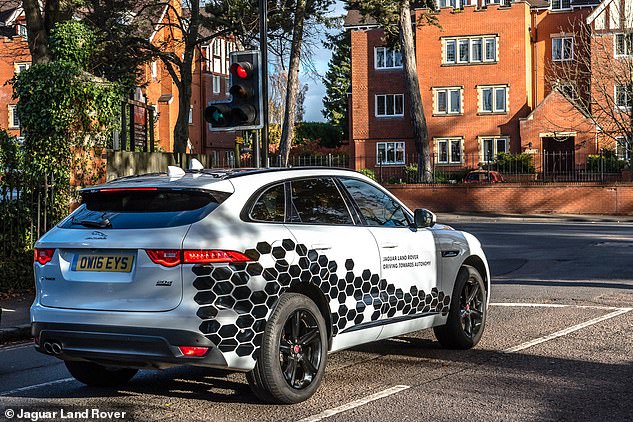 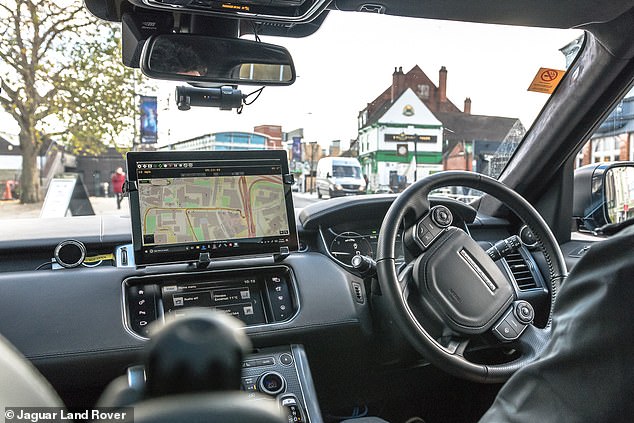 Like a mobile phone, each car’s software can be ‘perpetually updated’ over the air, meaning they remain always up to date

However, both companies downplayed the Big Brother aspects of the technology – which monitors driver behaviour and choices – and side-stepped the issue of how such data might be harvested for profit, insisting that ‘privacy is something we take very seriously.’

Both firms declined to comment on the cost of the deal.

The companies announced: ‘Jaguar Land Rover has formed a multi-year strategic partnership with Nvidia, the leader in artificial intelligence and computing, to jointly develop and deliver next-generation automated driving systems plus AI-enabled services and experiences for its customers.

‘Starting in 2025, all new Jaguar and Land Rover vehicles will be built on the NVIDIA DRIVE™ software-defined platform—delivering a wide spectrum of active safety, automated driving and parking systems as well as driver assistance systems’.

Jaguar Land Rover said the collaboration ‘will enable the delivery of innovative assisted and automated driving services throughout the life of the vehicle via over-the-air software updates.

‘As part of Jaguar Land Rover’s Reimagine strategy, the partnership will transform the modern luxury experience for customers starting in 2025’.

Jaguar Land Rover chief executive officer Thierry Bolloré said: ‘Jaguar Land Rover will become the creator of the world’s most desirable luxury vehicles and services for the most discerning customers. Our long-term strategic partnership with Nvidia will unlock a world of potential for our future vehicles as the business continues its transformation into a truly global, digital powerhouse.’

Jensen Huang, founder and CEO of Nvidia said: ‘Next-generation cars will transform automotive into one of the largest and most advanced technology industries. Fleets of software-defined, programmable cars will offer new functionalities and services for the life of the vehicles. We are thrilled to partner with Jaguar Land Rover to reimagine the future of transportation and create the most advanced cars.’

harrry
Previous article
How much higher than 5.5% will UK inflation go and what’s the impact?
Next article
Kendall Jenner’s New Jewelry Is An Olympic Gold Medal