At the end of another turbulent week for technology stocks on Wall Street, shares in the internet shopping behemoth jumped 14 per cent, adding £145billion to its value.

The surge made Bezos – who set up Amazon in 1994 and ran the company until handing over to Andy Jassy last year – some £14.5billion richer. 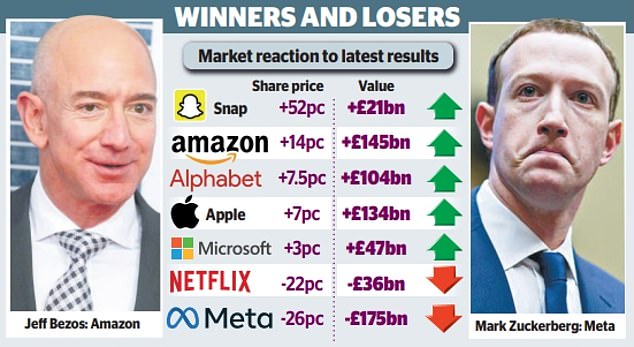 His fortunes were in sharp contrast to those of Facebook founder Mark Zuckerberg who has taken a hit of £23billion since disappointing results sent shares in his company tumbling.

Facebook owner Meta saw its stock crash 26 per cent on Thursday – wiping £175billion off its value in the biggest one-day loss of market value of all time.

The tech results season came after a shaky start to 2022 on Wall Street as the prospect of higher interest rates send shares in the sector tumbling. The tech-heavy Nasdaq has lost more than 10 per cent of its value this year – putting it in so-called ‘correction’ territory though it remains 66 per cent up on the start of 2020.

Susannah Streeter, senior investment and markets analyst at Hargreaves Lansdown, said: ‘The stomach-churning rollercoaster ride on the financial markets is set to continue.’

Bezos, 58, is the second richest man in the world with a fortune of £133billion. Zuckerberg, 37, has now fallen out of the top ten, though is still said to be worth some £65billion. Their contrasting fortunes underlined the emergence of winners and losers among the US tech giants as the world bounces back from Covid19. While Facebook this week reported its first ever fall in user numbers – sending shares tumbling – Amazon posted £100billion of revenues in a single quarter.

But streaming service Netflix saw its stock tumble 22 per cent in a single day after it gained fewer new subscribers than expected.

The wild swings in the value of the so-called FAANG stocks – Facebook, Amazon, Apple, Netflix and Google – have been felt by British savers and investors who own these stocks outright or are exposed through funds and investment trusts held in pensions and ISAs.

One of the most popular is Scottish Mortgage Investment Trust, whose major holdings include Netflix and Amazon as well as Moderna and Tesla. It is down almost 20 per cent this year. 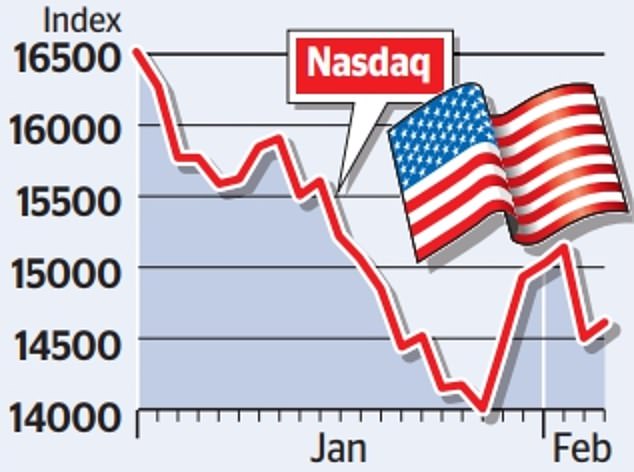 Chris Beauchamp, chief market analyst at IG Group, said: ‘The market has see-sawed on tech earnings over the past couple of weeks, sentiment having been buffeted by the changing fortunes of some of the world’s biggest companies.

‘The sector continues to see a divergence between the winners and losers, making it harder for investors to assume that the FAANG stocks will continue to be a solid bet for future growth.’