John Lewis Partnership has stoked hopes it may reinstate its treasured staff bonus after it smashed its £100million annual profit target.

In a leaked memo, seen by The Mail on Sunday, the company said profit had been lifted by bumper Christmas sales at its Waitrose supermarkets and a major cost-cutting drive.

Executives at the £10billion retail group hailed the performance as a ‘fantastic achievement given the complexity of trading through this year’. 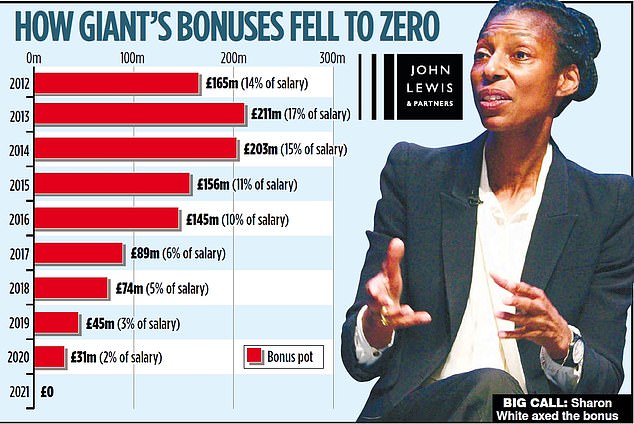 The figures may also be regarded as a sign that chairwoman Sharon White’s efforts to stop the rot and turn around the group are starting to bear fruit despite the stores being closed for several months last year.

The memo raised the prospect it will pay an annual bonus in March to its 80,000 employees for the first time since 2020. The retail giant, owned by staff – called ‘partners’ by the company – cancelled its staff bonus last year for the first time in 67 years.

Executive director for finance Berangere Michel refused to commit to a decision when quizzed by staff in messages posted on the group’s internal communication system. But she described the payout as a ‘possibility’, adding that the company’s financial performance over Christmas had been a ‘superb achievement’.

The partnership is due to issue a statement on its financial performance next month. Its board will make a decision in early March. But Michel’s view is likely to carry considerable weight as she is in charge of the group’s finances.

White, who arrived in 2019, slashed the annual staff payout to fund her turnaround strategy. It has involved shutting shops, launching a housebuilding arm and more financial services.

Michel told staff the company was ‘well ahead’ of its £100million annual profit target by the end of December, with still a month of its financial year left.

The John Lewis bonus is seen as a key mark in its mutual ownership structure, helping secure its reputation as an attractive employer. Its bonus pot peaked in 2013, when it paid out £211million – 17 per cent of employees’ annual salary.

It will reveal its final decision alongside its annual results on March 10. An insider said it would be a ‘knife-edge decision’.

John Lewis said in September that a bonus would not be paid unless profits hit £150million and it reduced its debt burden. White called the targets ‘stretching but not impossible’.

Independent retail analyst Nick Bubb said: ‘The profits are there to pay it [the bonus] out. It’s going to be a tough call. It looks like there is enough cash. But the worst thing would be to pay a bonus and then cut it again next year.’

Analysts will look to see if John Lewis can break even when the costs of restructuring are absorbed. Last year, it notched up profits of £131million. But the firm racked up losses of £517million when exceptional items – such as redundancy costs from store closures – were included. In the same period, the company benefited from £190million of business rates relief and furlough support.

The recent performance saw a split within the group. Waitrose, which has 331 supermarkets, exceeded sales targets in December by £60million while John Lewis, which has 34 stores, fell short by £52million. The memo warned of ‘inflationary pressures’ at Waitrose, despite higher sales and profit at the division.

Festive sales at the John Lewis chain were hit by shortages of products as supply chain problems weighed on operations. The Omicron outbreak also reduced shopper visits. The business is targeting profits of £400 million by 2026.

An improving performance at the John Lewis Partnership could bring renewed pressure to hand back more of the Government subsidies handed to it during the pandemic.

The internal memos also revealed efforts to cut costs are progressing slower than planned. It saved £153million this year, £31million less than its original target.

Michel said: ‘We now expect that we will miss our full-year target of £216million by £35million to £40million.’

But the group continues to target ‘in excess of £300million savings by the end of the next financial year’, she added.

harrry
Previous article500,000 families to lose some of their child benefit
Next articleCelebrate the Super Bowl With a Bowl Cut Hairstyle