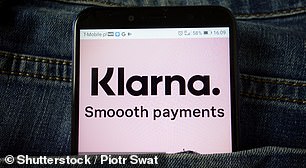 Misleading: Klarna’s terms and conditions  were deemed ‘potentially unfair and unclear’ to shoppers

Buy now, pay later firms have been ordered to clean up their small print.

A City watchdog probe found the terms and conditions of four major lenders, including Klarna, were ‘potentially unfair and unclear’ to shoppers.

Sheldon Mills, executive director of consumers and competition at the Financial Conduct Authority, said: ‘Even though the type of buy now, pay later agreements offered by these firms are not yet regulated, the FCA was able to use the Consumer Rights Act to assess the fairness and transparency of the terms.’

Laybuy said it was committed to ensuring terms and conditions were fair. Clearpay said it would be refunding a ‘very small group’ of customers.