In robust defence of UK’s energy industry, Kwasi Kwarteng says it is ‘completely insane’ for Britain to turn its back on North Sea oil and gas

Kwasi Kwarteng said it was ‘completely insane’ for Britain to turn its back on North Sea oil and gas, in his most robust defence yet of the UK’s energy industry.

The Business Secretary said boosting native oil and gas reserves would weaken ‘Putin’s malign grip on the West’ in the wake of the Kremlin’s assault on Ukraine.

For years, environmental campaigners have been urging the Government to slash funding and block new projects. But Kwarteng added that more investment is needed, even as Britain plans its long-term switch to cheaper and cleaner renewable power. 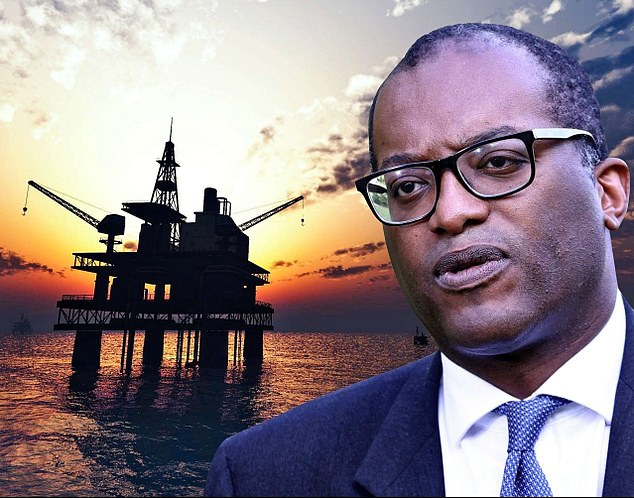 His rallying call came as the GMB Union urged him to consider ring-fencing 15 per cent of North Sea gas production to create a closed domestic market. This gas would only be available to British companies, a move the union claims could drive down prices as it would scrap competition.

Setting aside this 15 per cent, it says, could provide cheaper gas equivalent to around 90 per cent of the total needed by energy-guzzling heavy industries such as steel, construction, ceramics and food manufacturing companies.

In a matter of weeks, Western governments have sanctioned individuals and companies, while businesses from BP and Shell to Boohoo and Netflix have all curtailed their own activities with Russia in an unprecedented display of corporate defiance.

And it has also led to a change in direction in a long-simmering debate about whether the UK should prioritise energy security or cutting carbon emissions.

Fears about energy security have been rising for months after whole sale gas prices rocketed in the summer of 2021. This was driven by a toxic cocktail of a long, cold winter, low gas storage and Russia sending less gas into Europe.

This had already triggered the worst energy crisis in generations in Britain before the Ukraine invasion.

The cost-of-living crisis threatens to leave already struggling families unable to heat their homes, drive inflation sky-high – it is expected to surpass 8 per cent in April – and could see bills jump to almost £2,000 by this winter.

Oil and gas prices have spiked even further in the past week since the UK and US pledged to boycott Russian oil imports.

Britain will wean itself off by the end of the year, which is possible as it receives little oil directly from Russia.

This decision has underlined the need for the UK to turn to its indigenous energy reserves.

Kwarteng said: ‘This is no longer about tackling climate change, or reaching net-zero targets.

‘There is now an urgent need for Britain to become energy-independent. Because leaving our country continually exposed to a gas market that can be manipulated by the Kremlin would be a complete dereliction of duty.’

Andy Prendergast, GMB national secretary, said: ‘As a gas-producing nation, the UK is an international outlier by not having domestic limits in place. It’s time for a national conversation about an industry that can make an immediate contribution to lifting the cost-of-living crisis.

‘In the long-term, it would be morally repugnant to reach net-zero by winding down our vital industries while importing gas from despotic regimes.’