The Business Secretary is under pressure to act after national security advisers appeared to back Newport Wafer Fab’s sale.

The deal continues to cause alarm among industry experts and politicians who are horrified an important UK manufacturer was sold to a Chinese firm without scrutiny – especially as the world is battling a microchip shortage.

The Mail understands Kwarteng is now looking at new powers to investigate the sale, which could even result in it being reversed. 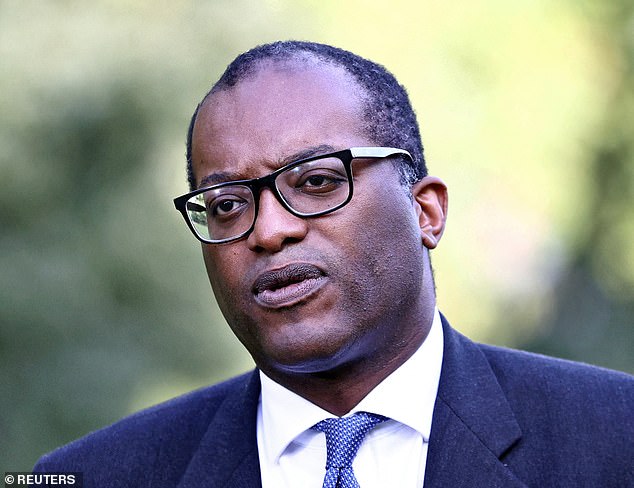 It would be the first major test of the National Security and Investment Act’s provision that allows ministers to call in takeovers of strategic companies after they have already gone through.

And it comes as Kwarteng weighs up whether to approve a number of foreign deals, including the £2.6billion sale of Ultra Electronics to US private equity group Advent International and Viasat’s £5.4billion bid for Inmarsat.

The Government has typically taken a strong line on Chinese investment – refusing to include Huawei in the 5G rollout.

Nexperia was already a major shareholder before the deal.

Managers at Newport Wafer Fab begged the Government to intervene – and Boris Johnson asked national security adviser Sir Stephen Lovegrove to weigh up whether the deal was a threat.

Lovegrove concluded it was not but Kwarteng can step in, with sources suggesting he may do so ‘within months’. Newport Wafer Fab is the UK’s biggest producer of microchips, an essential part of all electronic devices.

But it does not focus on new or emerging products, instead producing technology that has been around for years.

However, a source told the Mail the firm is strategically important, saying: ‘The tech isn’t that advanced. But we need to look at sovereign industrial capability.’

A slew of industrial, aerospace and defence firms have been sold off in recent years, raising alarm bells in the military, Westminster, unions and workers.

These include Cobham to Ultra’s suitor Advent in a £4billion deal last year, which resulted in Cobham being split up and much of it sold off within 18 months.

Although Newport Wafer Fab was in financial trouble, industry groups including a consortium led by former Imagination Technologies boss Ron Black were interested in buying it and pumping in new investment.

Tom Tugendhat, chairman of the Foreign Affairs Select Committee, said failing to oppose the deal was an ‘error’ and called on ministers to ‘protect what’s left of our semiconductor industry’.

Former Tory leader Iain Duncan Smith said it was ‘ridiculous’ not to intervene. And Ciaran Martin, the former head of the National Cyber Security Centre, said last year that the takeover was ‘puzzling’ and ‘inconsistent’ with the Government’s stance on Beijing.

Newport Wafer Fab had more than 400 staff in 2020 with a turnover of almost £50m before the pandemic. The Business Department said: ‘The Government is considering the case and no decisions have been made.’

Nexperia said: ‘Nexperia has safeguarded Newport Wafer Fab’s role within the UK’s semiconductor industry and has been delivering on the plans to invest in the site to make it as successful as its Manchester Wafer Fab.’

harrry
Previous articleDo estate agents leave property adverts up on purpose so that we call in and share our details?
Next articleMAGGIE PAGANO: Nuclear needs PM’s energy security paper