Local high streets are set to capture around £360million over the next 12 months as the trend for remote working continues, according to a new study.

Research by credit card firm Capital One UK suggests that this compares to £358million spent in office areas, where businesses are losing out on footfall.

Workers are set to spend an estimated two-thirds of their spend on items such as coffee and lunch on their local high streets, according to experts, at an average of £42 per person a week or £2,200 a year. 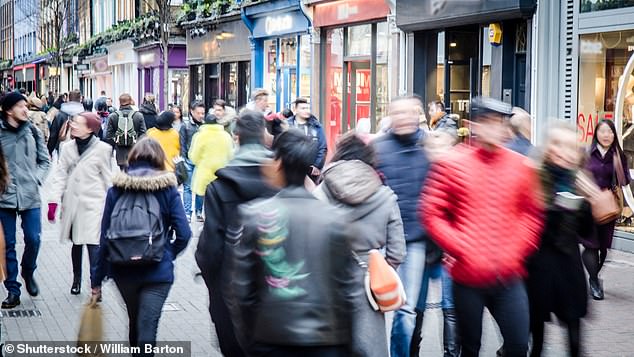 Local high streets set to capture around £360 million over the next 12 months as the trend for remote working continues, according to a new study

But office areas are not losing out completely, and employees are also spending £24 on average a week near their work or around £1,250 a year.

National spending overall is also set to increase – the study found nearly a third (29 per cent) of workers expect the amount of money they spend locally to increase now Covid restrictions have lifted.

A third of Brits (32 per cent) want to support small local businesses more now than before the pandemic, while 28 per cent feel it’s important to be more sustainable and shop local.

The easing of restrictions is also benefiting workplace areas, with 21 per cent of workers planning to spend more money in nearby shops now restrictions have eased.

Capital One predicts spending at work will increase by 26 per cent from £24 to £31 a week, which equates to £322 per person over a year.

In terms of regional spend, the West Midlands sees the highest proportion of income being reinvested in the local area as those working from home plan to spend 5 per cent of their salary compared to 3.8 per cent nationwide.

This equates to an annual spend of £2,200 per worker and £959million boost for local high streets in the West Midlands.

When it comes to total spend in home areas, London is seeing the most with £1.49billion spent by those working from home, while the South East is in second place (£1.05billion), followed by the West Midlands (£959million) and the North West (£762 million). 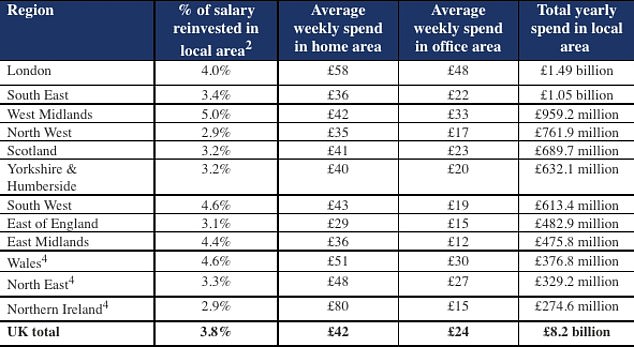 A regional breakdown of people spending in home and office areas 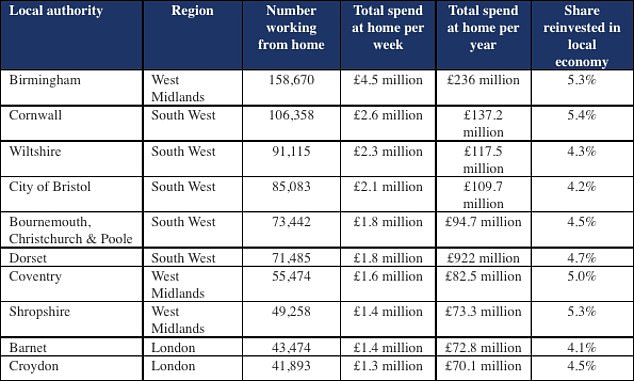 Commenting on the results, Katy Lomax a chief experience officer at Capital One UK said: ‘For the many workers who transformed spare bedrooms and kitchen tables into makeshift offices during the past two years, it looks increasingly clear that hybrid working looks here to stay.

‘Now, as we emerge from the pandemic, it’s great to see spending being spread more broadly as a result.

‘The past two years have allowed people the opportunity to reassess their finances and think about where and how they would like to spend their hard-earned cash. With many traditionally office-based businesses now operating a hybrid working model, it’s really encouraging to see workers are enjoying all of the fantastic amenities around them – both on their office and home doorsteps.’

On a local authority level, home workers in Birmingham spend the greatest amount in their local area per year by a significant amount.

Meanwhile, homeworkers in Sandwell reinvest the greatest proportion of their income in the local economy, at nearly 6%, while in Wandsworth in London that drops to under 3%, largely due to higher average annual incomes.

According to the Office of National Statistics, between January 19 and 30 this year, 36% of working adults reported having worked from home at least once in the last seven days because of the pandemic.

Almost half (46%) of these homeworkers said they spent less as a result of homeworking. A similar proportion of homeworkers reported spending less when interviewed in November (49%).

The area where homeworkers most commonly saw spending increase was utility bills, where 86% reported their spending had risen.