When the founder and chief executive of Howdens Joinery retired four years ago, he could hardly have imagined his successor would so soon be brushing shoulders with the bosses of Sainsbury’s and ITV in the FTSE100.

But, later this month, the kitchen supplier is joining the index of Britain’s biggest companies after a two-year run of booming sales.

It may seem a little dowdy when compared with the likes of AstraZeneca, Burberry and Ocado, but it has quietly been staking a claim to be one of the most successful consumer businesses in the country. 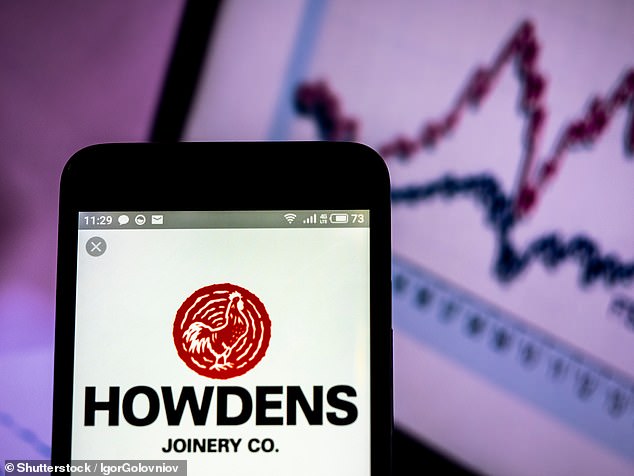 Humble origins: Howdens Joinery has quietly been staking a claim to be one of the most successful consumer businesses in the country

From humble origins in the 1990s, when it began with just 40 people and five kitchen ranges, the Yorkshire-based company now has 778 UK depots that sell kitchen and bathroom supplies to builders, and it plans to grow to 950 UK sites.

Since the UK first entered lockdown, its shares have soared 54 per cent to £7.62 as homeowners stuck indoors looked to spruce up their kitchens and bathrooms.

Credit Suisse, which rates the company a ‘buy’, slapped a £10 price target on the shares this month after a speaking with management. It said it was surprised at the ‘confidence in both retaining recent share gains and continuing to drive for more’. It added that company bosses shared its analysis that there is an opportunity to steal £1billion market share from independent retailers with its model of building close relationships with kitchen fitters and builders.

Peel Hunt analyst Clyde Lewis said he was not surprised to see it promoted to the Footsie.

‘They have built a business focused on serving trade clients as best they can, continuing to evolve their offering and manufacturing, and have been consistently taking market share,’ he said.

‘When the whole market shut down, people realised they weren’t spending money, but were still earning. They turned to doing up their houses, first with nicer sofas and flat-screen TVs. After that, they turned to extensions, kitchen upgrades and bathroom upgrades. Howdens worked hard and delivered the results to warrant inclusion in the FTSE100,’ said Lewis.

Independent retail analyst Andrew Busby said it was ‘slightly surreal’ to see Howdens joining the likes of Sainsbury’s and Tesco in the blue-chip index.

But he said: ‘The main reason it has been so successful is fewer people are moving and they are instead upgrading their homes. Howdens entering the FTSE100 is a reflection of where we are as homeowners. It also reflects the increasing move to hybrid working, with people wanting their homes to be as pleasant an environment as possible.’

Founder Matthew Ingle, 67, left Howdens in 2018 after 22 years with the group. He built a business that operates from industrial estates instead of high streets and works almost exclusively with builders.

Howdens depots are stocked with almost everything builders need, so kitchens can be picked up immediately or soon after, rather than having to wait weeks or months for orders. This also helped Howdens brush off last year’s supply chain chaos, stealing market share from rivals and cementing its position as the UK’s biggest kitchen supplier.

Ingle was named honorary life president when he stepped down as chief executive. He was succeeded by Andrew Livingston, 54, who joined from building trade supplier Screwfix. Since taking over, he has revamped Howdens’ depots, bolstered its online offering and introduced more high-end ranges.

Last month, Howdens bought luxury worktop supplier Sheridan Fabrications in a bid to sell more expensive kitchens. It is a Royal Warrant-holder, meaning it has supplied the households of the Queen or the Prince of Wales for at least five years.

harrry
Previous articleCan’t get an NHS dentist? The answer starts at £10 a month
Next articleFraudsters prey on coronavirus sufferers in text scam