London has left its European rivals trailing behind by being crowned the world’s leading financial district for the second year in a row.

The UK capital scored higher than any other city – including New York and Singapore, which followed second and third – in terms of its attractiveness to the lucrative industry.

The figures, published by the City of London Corporation, were another snub to those who claimed Brexit would decimate Britain’s financial services sector. 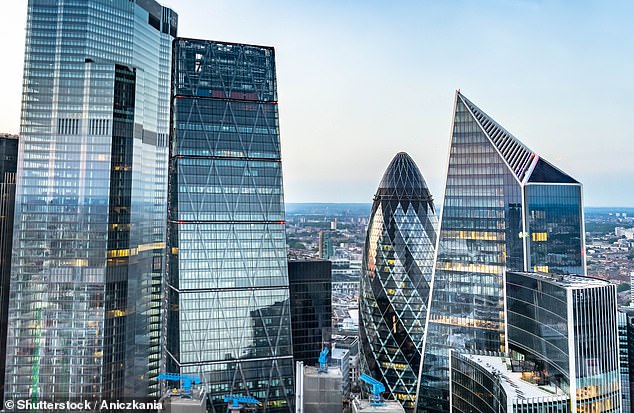 Open for business: London scored higher than any other city – including New York and Singapore, which followed second and third – in terms of its attractiveness to the industry

And they came just a day after US banking giant Citigroup announced it was planning a £100million three-year revamp of its head office in London’s Canary Wharf.

The plans to overhaul the skyscraper were seen as a vote of confidence in London, where Citi employs around 9,000 staff.

Douglas McWilliams, founder of the Centre for Economics and Business Research, said: ‘Some of the Brexit doom-mongers were fairly extreme, predicting job losses in the City of up to 40 per cent.

‘It looks now like there haven’t been any – those which have been transferred to the continent have been replaced by new jobs created in London.’

With a score of 61 in the City of London Corporation’s rankings, London was far ahead of European rivals Frankfurt and Paris – which scored 45 and 41 respectively.

But the corporation pushed the Government to keep taxes competitive. It said the UK’s tax burden on financial services firms was ‘relatively high’ – and corporation tax is set to rise again next year from 19 per cent to 25 per cent.