LV faced a fierce backlash last night after it handed its bungling chief executive a bumper pay packet worth more than £1million.

Alongside pension contributions and other benefits he was paid more than £1million in what was branded a ‘reward for failure’ by critics. 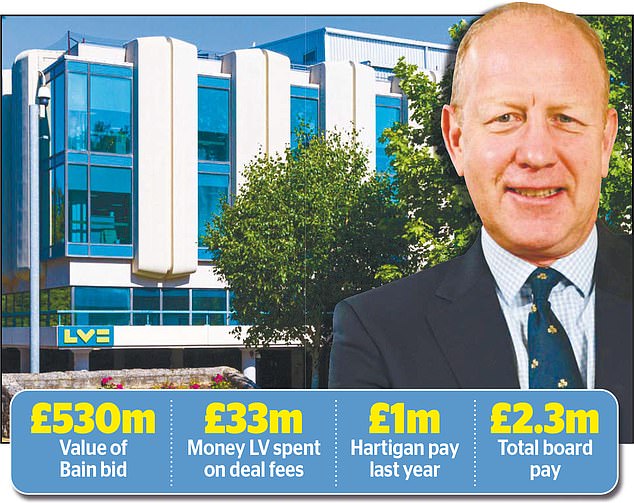 The revelations – in the LV annual report – came less than four months after the mutual’s members voted down Hartigan’s plans to sell it to US private equity group Bain Capital for £530million.

The report also revealed that LV bosses spent more than £33million of members’ money on public relations advisers, lawyers and investment bankers to push the deal through.

The botched takeover plan cost chairman Alan Cook his job – but only after he picked up another £201,000 in fees from LV for 2021.

In total, the nine members of the LV board, including Hartigan and Cook, were paid £2.3million last year.

But while critics have called for Hartigan to follow Cook out the door, he remains in post despite spending much of last year trying to sell the group.

The deal could have seen him earn even more under private equity owners while at the same time stripping LV members of their mutual ownership.

But it was rejected in December in a member revolt after a Daily Mail campaign to save the firm from falling into private equity hands.

Peter Bloxham, a policyholder and a critic of the Bain deal, said Hartigan’s latest bonus amounted to a ‘reward for failure’.

How board changed its tune over firm’s health

The row over boardroom pay at LV came as bosses insisted the group was financially secure, despite claims to the contrary while trying to sell it to US private equity.

Formerly known as Liverpool Victoria, it said it beat targets in terms of sales and profitability and its results underlined its ‘viability’ as an independent mutual.

LV’s 1.2m members shared £38million worth of bonuses, including a £10million windfall from the sale of its general insurance business which was completed in 2020.

The upbeat assessment of its future prospects was in stark contrast to Mark Hartigan’s repeated claims over the past year that the business could not continue independently.

The former army colonel claimed at one point that the £530million takeover by Bain, roundly rejected by members, was ‘the only deal that saves the future of LV’.

In a change of tone yesterday Hartigan said: ‘LV has outperformed both our new business volumes and profitability targets with significant growth in sales and trading profit.’

But the LV board insisted that Hartigan has its ‘absolute and full support’.

Tory MP Kevin Hollinrake, a Treasury select committee member, said Hartigan needs to be ‘shown the door’ and called for a boardroom clear out.

He said: ‘The only thing he has done for LV is throw £33million of members’ money down the drain – chasing a deal they never wanted for his own selfish interests.

‘That he can now be paid such an astonishing bonus for his utter incompetence is mind-boggling.

‘They say he has their ‘absolute and full support’ going forward.

‘For the members who own this business to have any faith in it moving forward, there needs to be a complete clear-out of anybody involved with the Bain Capital deal.’

Labour MP Gareth Thomas, chairman of Parliament’s all party group on mutuals, said Hartigan’s bonus was a ‘slap in the face’ for members.

Thomas said: ‘LV has finally admitted bosses blew more than £33million of members’ money trying to sell their mutual benefits up the river.

‘To offer up a £500k bonus to the driving force behind last year’s Bain fiasco is truly shocking. This bonus payment begs the question as to who is really in charge at LV. What on earth were the board thinking?

‘Mr Hartigan needs to go and frankly this weak, weak board needs to leave too and be replaced by those genuinely committed to running a mutual business properly.’

Peter Hunt of mutual lobby group Mutuo said Hartigan and Cook’s leadership of LV has been an ‘unmitigated disaster’.

He said: ‘There are a lot of lawyers, bankers and advisers who made a packet out of this. And LV bosses get rewarded as if they have done a good job.

‘But the ones left picking up the bill for it all are LV’s members.’

This shameless bonus is an insult to members

During three decades of reporting on executive pay, I have rarely encountered a bonus so shameless as the one being pocketed by LV chief executive Mark Hartigan.

The only one on a par with the package is the one handed to the former Persimmon chief Jeff Fairburn. The latter payout was much bigger in financial terms, but this is at least equally despicable.

Talk about rewards for failure: Hartigan has been handed a bonus of just over £500,000 for a year when he presided over a total debacle.

His ill-conceived plan to sell LV to private equity barons at Bain failed to garner sufficient support from members.

Given that he and former chairman Alan Cook had invested so much of their personal capital in the deal, this was an embarrassment on a major scale.

Hartigan should have resigned to make way for the credible leadership LV members deserve. Instead, he has not only clung on to his job but also lined his pockets.

Much of the responsibility lies with LV’s pay committee, which for the period in question was chaired by non-executive director Alison Hutchinson, who as vice chairman of another mutual, Yorkshire Building Society, ought to have known better than to have rubber-stamped this outrageous bonus.

It barely needs saying that to hand this money to Hartigan is a slap in the face for each and every LV member.

No less than £33million of their money was spent on the doomed private equity sale, when any objective observer could see it was so contrary to the mutual ethos it ought never to have been countenanced.

The award shows yet again the cynical contempt in which Hartigan and his cohorts hold the LV members they are supposed to serve.

Interestingly, in the section of the annual report detailing his ‘individual and strategic objectives’ used to work out his rewards, members are not mentioned. It is a telling omission.

This bonus is unconscionable. Members can vote on directors’ pay at the annual meeting, scheduled for September, and I urge them to do so.

Although it may make no difference to whether or not Hartigan pockets the money, it will send out a powerful signal.

If he has one shred of respect for the mutual values LV members voted to preserve, he should renounce all claim to his bonus forthwith and donate it to charity. I am not holding my breath.