Disgraced LV chairman Alan Cook is still earning £560 a day despite being ousted from the insurer.

The 68-year-old – who along with chief executive Mark Hartigan tried unsuccessfully to sell the 179-year-old mutual to private equity – leaves at the end of March.

But he has already handed over the reins to interim chairman Seamus Creedon, leaving him with little to do. 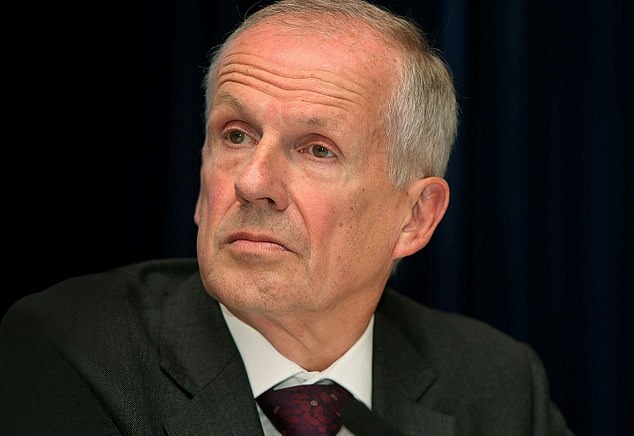 Disgraced: LV chairman Alan Cook leaves the mutual at the end of March

In a statement on Wednesday, LV referred to Creedon as ‘interim chair’.

However, the Mail understands Cook is still picking up his handsome fee of £205,000 per year. That means that in the 53 days between handing over to Creedon and leaving he will collect £30,000.

And in the 112 days between the collapse of the proposed takeover by private equity group Bain Capital and his departure he will get £63,000.

Tory MP Kevin Hollinrake, who sits on the Treasury select committee, said: ‘LV has put out a statement referring to Seamus Creedon as the interim chairman, so why is Mr Cook still hanging around?

‘That he was not ousted immediately after his Bain Capital stitch up fell through was disgraceful enough.

‘Now he has bought himself another eight weeks of work and will be paid £30,000 of members’ cash to boot. With Mr Hartigan hanging on and waiting in line for a handsome bonus, and now this from Mr Cook, LV bosses truly appear to have no shame at all.’

He said: ‘He’s basically a drag on the business. So there’s no reason for him to be anywhere near it, and he should absolutely not be being paid.’

He said: ‘The fact LV is already putting out statements referring to Mr Creedon as interim chairman begs the question, what is Mr Cook still doing there? He has clearly acknowledged there is no future for him at LV and members will be glad to see the back of him. But between his announcement and actually leaving, he will pick up a further £30,000 of members’ cash in one final demonstration of his remarkable self-interest.

harrry
Previous article
A Brief History of Celebrities Attending the Big Game
Next article
Fashion Bombshell of the Day: Kristin from LA