MAGGIE PAGANO: How your weekly shop’s going to potash


Potash is one of the Earth’s most magical minerals.  It is a compound that contains potassium, an essential ingredient of fertilisers needed to grow staple crops such as rice, wheat and soybeans.

Although mainly used for agriculture, potash is also used to preserve most canned foods, table salt and to enhance the colour and aroma of chocolate.

Wine-makers also have a big appetite for potash which acts an antioxidant and helps stop wine from ageing – magic indeed. 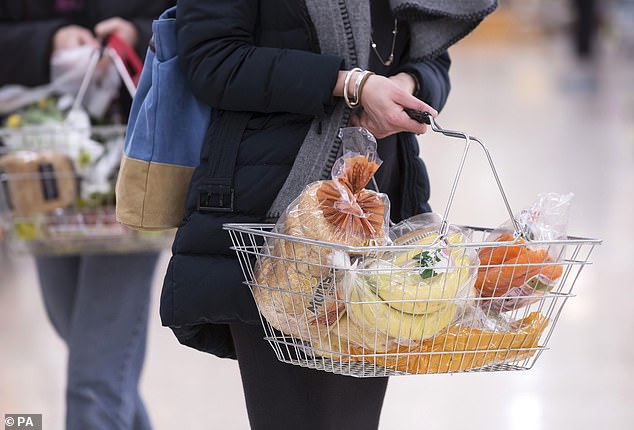 Inflation bites: The price of groceries over the last four weeks is 5.2% up on a year ago, with inflation spiking in the last month to the highest in a decade

And it is an increasingly expensive potion. Over the last year the price of potash has sky-rocketed.

First, because of supply problems and high energy prices caused by the pandemic but then exacerbated by sanctions against Belarus – the world’s third biggest producer.

A more recent tough round of sanctions by the UK and the EU against the country – coupled with those against Russia – are keeping the price at decade-high levels amid worries of world food shortages.

Together, Russia and Belarus provide about 40 per cent of global production. Canada, which accounts for about the same, is now scrambling to reroute supply chains.

The soaring price of potash is one of many factors behind why we are paying so much more for the food in our shopping baskets.

It is also one of the many consequences of the pandemic, and more recently, Russia’s invasion of Ukraine.

On that score, Adnams, the Suffolk brewer, has warned that the recent tripling in barley costs will send beer prices shooting up by Christmas. Ukraine supplies just under a fifth of world barley exports.

According to the National Farmers’ Union, the cost of nitrogen fertiliser has risen by 200 per cent over the last year, animal feed has shot up by 60 per cent over the past two years while the price of energy and lubricants is more than a third higher. Even seeds cost more.

Add all this together and you can see why the price of groceries over the last four weeks is 5.2 per cent up on a year ago, with inflation spiking in the last month to the highest in a decade. From what one sees, it is surprising the increase is not higher.

Price rises are already changing consumer behaviour – more own-label products and fewer trips to the supermarket to save on petrol.

Aldi and Lidl saw big rises in market share as shoppers seek out cheaper own-label food. It is not only the discounters at war.

Even Waitrose is suing Asda over the use of the trademark ‘Essentials’ on its labelling.

Overall, grocery sales were down year on year because commuters are returning to the office and consumers are eating out more.

Yet the proportion of spending on own-label products versus brands is now more than 50 per cent.

With prices rising across the board – from potash to energy to transport – keeping those costs down is going to be a huge challenge even for the discounters.

It is hardly a surprise that Kantar’s figures also show that Asda and Morrisons have been the hardest hit.

The two groups saw sales fall 9.9 per cent and 11.5 per cent respectively over the period, taking a big bite out of their market share.

This newspaper repeatedly warned the new private equity owners of these two chains would put up prices and so they have.

Recent data from retail researcher Assosia showed that Asda and Morrisons hiked more sharply than their rivals. The price of a basket of 18 staples jumped 15.3 per cent to £20.37 at Morrisons and by 13.6 per cent to £18.08 at Asda.

Yet at Tesco, the same basket cost just 0.8 per cent more, and across the wider grocery market it cost 8.3 per cent more on average.

The worst offender, according to The Grocer, was Morrisons which has turned out to be the dearest of the big four grocers over the past six weeks. That’s not only for food, but petrol as well.

Competition watchdog, the CMA, is investigating Clayton, Dubilier & Rice’s takeover and recently warned it will look more closely at the petrol prices it is charging on its forecourts.

CD&R also owns the Motor Fuel Group giant, which operates 921 petrol stations across the country. The CMA should look at food prices as well as petrol, particularly at groups owned by private equity.

Posh handbags are back in vogue now that we are out and about again. Mulberry reports that sales are far better than expected around the globe, and profits will be higher than forecast.

In contrast with other luxury goods firms, this rather suggests that Mulberry does not have many Russian oligarchs among its customers.