Rishi Sunak has been in Number 11 for barely two years but in that time he has been both a pandemic and a wartime Chancellor.

He was hoping the Spring Statement would be just that – an update on the economy and public finances ahead of an autumn Budget that sets the Tories up for the next general election. But that hope was dashed as, having dealt with Covid, he tackles Russia’s invasion of Ukraine and a cost of living crisis.

The war has blown a hole in the Treasury’s economic forecasts and put huge pressure on the Chancellor to insulate UK families from inflationary forces the conflict has unleashed. 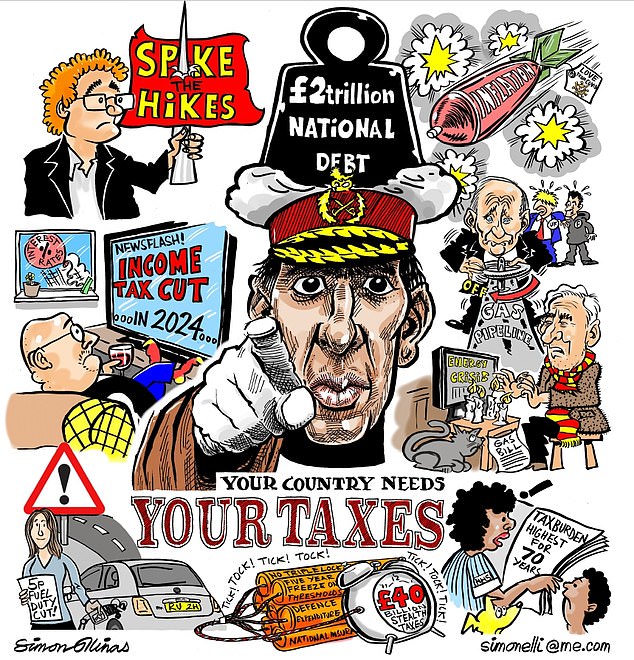 Sunak has both raised and cut taxes over the past couple of years as he walks a tightrope between propping up the economy and spending on the NHS while getting the debt under control and helping families.

And the numbers on both sides of the equation are astounding. Yesterday, he pledged to slash income tax by 1 per cent by 2024, unveiled a national insurance tax cut worth £6billion, and a £2.4billion cut to fuel duty as he tried to appease those feeling the squeeze.

In ordinary times the sheer scale of those cuts would be viewed as dramatic, but they are insignificant compared with what Sunak spent as he tackled Covid.

In his first Budget in March 2020 he announced £30billion to fight coronavirus and a £5billion emergency response fund to help the NHS.

Shortly after the Budget he pledged £330billion in loan guarantees for businesses affected by the pandemic and then unveiled the furlough scheme – the policy that made his name.

Furlough would end up costing £70billion but saved millions of jobs and helped the economy avoid long-term scarring.

This was followed that year with the Eat Out to Help Out scheme, a £850million plan to reboot the economy.

There was no let-up in 2021. He continued to turn on the taps to get to grips with the crisis.

In his second Budget he pledged a further £65billion to support jobs and businesses, and announced a rise in corporation tax from 19 per cent to 25 per cent, raising over £17billion a year by the end of the parliament.

But Sunak was not done, and last September he unveiled a £12billion per year national insurance tax rise to tackle NHS Covid backlogs and overhaul social care.

This is all a world away from where he hoped to be when he took over in February 2020.

Sunak’s two-year whirlwind at No. 11 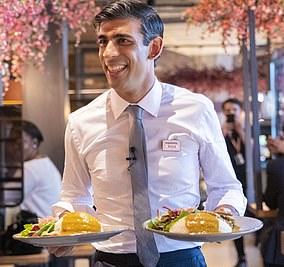 Dishing it out: The chancellor put £850m in to the  Eat Out to Help Out scheme

Under his tenure the country finds itself with the highest tax burden since the late 1940s.

Matt Kilcoyne, analyst at Adam Smith, said: ‘The figures in his budgets are enormous, mind-blowing really as the events of the past two years have been unprecedented.

Many believe Sunak is a low-tax fiscal conservative and the commitment to cut income tax by 2024 demonstrates that.

‘But his Budgets have involved plenty of fiddling – a bit like Gordon Brown – and there’s many Conservatives who are not happy.’

Many Tory MPs wanted Sunak to go much further, notably because he had been given a £50billion ‘windfall’ from higher-than-expected growth and tax revenues in the current financial year.

For every £4 the Chancellor took off taxpayers last year, he’s saying we can have £1 back. Taxpayers are still considerably out of pocket.’

But one thing is for sure: Sunak wants the Tories to head into the next election with tax cuts in place.

The OBR slashed its growth forecasts for the economy for the next two years before picking up again in 2024, when Sunak plans to implement his income tax cut.

The Chancellor also hopes inflation will have cooled by then and national debt – currently £2.3trillion – brought under control.

Kilcoyne added: ‘I think it’s by this point we’ll start to see Sunak’s real politics. One thing is for sure he is very different to Boris.

‘Boris loves his grand infrastructure projects, to the point that he never knows what the price tag is.

‘There could be serious tension between the two at this point.’

For the moment though Sunak remains cautious and wants to hold some of his windfall back in case another unforeseen event takes hold.

He knows that in the autumn he is likely to have to do far more, as the energy price cap for domestic bills could rise from almost £2,000 in April to about £3,000 in October.

And who can blame Sunak’s caution given the tumultuous first two years he has had.