Market meltdown: Oil hits $100 for first time since 2014 as £90bn is wiped off value of UK stocks while Russian shares suffer worst-ever fall

Oil soared above $100 a barrel and global stocks tumbled as Russia’s all-out war on Ukraine sent shockwaves around the world.

As panic tore through financial markets, the price of crude jumped nearly 10 per cent to a seven-and-a-half-year high of $105.79 while gas prices surged more than 40 per cent. 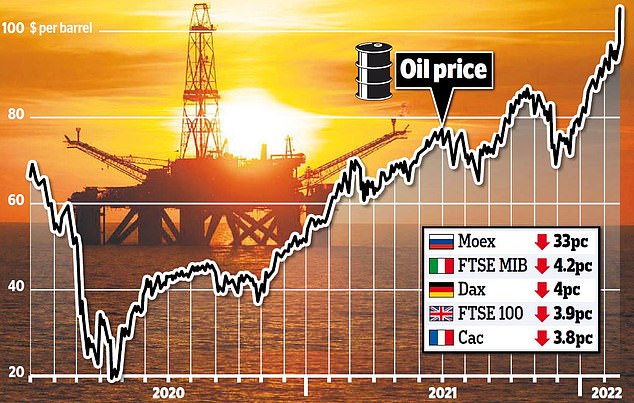 As panic tore through financial markets, the price of crude jumped nearly 10% to a seven-and-a-half-year high of $105.79 while gas prices surged more than 40%

London-listed stocks with operations in Russia and Ukraine – including Polymetal International, Ferrexpo, Evraz and Petropavlovsk – were the biggest losers.

A report by New York-based political risk consultancy Eurasia Group warned of a painful hit to the global economy.

‘The war, sanctions and the likelihood of retaliation by Russia together will likely cause a material global recessionary shock,’ its analysts said.

‘While the direct costs of the war are centred in Ukraine and Russia, sanctions on Russian banks and trade will likely cause disruptions to global trade and financial relationships with far-reaching effects.’

The share price falls in London were echoed across Europe with the main benchmark in Frankfurt down 4 per cent, Paris off 3.8 per cent and Milan 4.2 per cent lower.

The stock market in Moscow suffered its biggest ever one-day fall and the rouble crashed to an all-time low against the dollar.

Emmanuel Cau, head of European equity strategy at Barclays, said: ‘You have the panic button being hit right now.

‘I don’t think the market was pricing in the risk of a proper military conflict.

‘For the time being, it’s hard to see what could be a trigger for the market to stabilise.’

BP is under pressure to sever its ties with Rosneft following Russia’s invasion of Ukraine.

A leading think tank has branded its investment in Rosneft ‘completely improper’ and said it should ditch the holding immediately.

FTSE 100-listed BP has owned a 20 per cent stake in Russia’s state-owned energy group for 10 years.

Sam Armstrong of the Henry Jackson Society said: ‘It is completely improper that any British company should hold any stake in a state-owned Russian enterprise.

‘BP should immediately divest themselves.’

With Russian shells raining down on Ukraine and tanks rolling in, investors piled into gold and the US dollar as a desperate flight to safety.

Neil Wilson, chief market analyst at City trading firm Markets.com, said: ‘We are finding out which of the two is the real haven.’

He added: ‘There was an air of complacency earlier this week as investors hoped that Russia’s incursions would be limited. That fragile hope has been shattered.’

Experts warned that war in Ukraine will stoke inflation because of the West’s reliance on Russia for on oil, gas and food.

And Russia and Ukraine account for between 25 per cent and 30 per cent of global wheat exports and around 80 per cent of sunflower seeds, according to Capital Economics.

Any disruption to supplies – from the conflict itself or as a result of sanctions imposed by the West – is likely to push up prices.

Russ Mould, investment director at AJ Bell, said: ‘The oil surge is terrible news for businesses and consumers, and fundamentally this clarifies one of the key impacts of the Russia-Ukraine war – it will serve to further stoke inflation.

‘Not only will energy bills keep going up, but food prices look set to jump even higher.

‘Ukraine and Russia are both big food suppliers and any disruption to supplies will force buyers to seek alternative sources, which could jack up prices.’