Anglo American managed to avoid the chaos that engulfed markets yesterday by unveiling a record set of results.

The mining giant reported earnings for 2021 of £15.5billion, more than double the £7.3billion generated in the previous year, while revenues surged 63 per cent to £31.1billion.

Its performance was boosted by high prices for commodities such as iron ore, a key ingredient in steelmaking and one of the company’s core products, as suppliers struggled to keep pace with surging demand as the global economy recovered from its pandemic downturn. 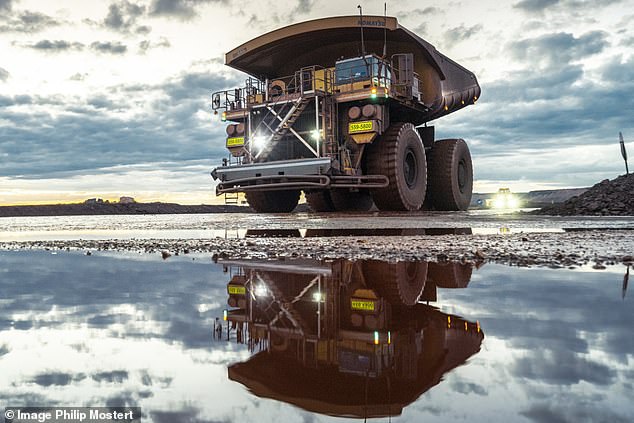 Dishing dividends: Anglo American reported earnings for 2021 of £15.5bn, more than double the £7.3bn generated in the previous year, while revenues surged 63% to £31.1bn

As a result of the record-breaking performance, Anglo unveiled a £1.6billion final dividend for investors, taking its total payout for the year to £4.6billion.

‘Anglo’s results are yet another reminder of how hot the mining industry’s been over the last year, and demonstrates the cash generation and shareholder returns that a miner can deliver when commodity prices are plump,’ said Hargreaves Lansdown analyst Matt Britzman.

‘Miners are in a good spot right now and Anglo looks well set up to capitalise on evolving demand.’

Anglo’s bumper dividend followed a whopping £12.6billion payout from rival Rio Tinto (down 1.8 per cent, or 101p, at 5467p) earlier this week, the second-biggest in UK corporate history.

Anglo wasn’t the only FTSE 100 firm reporting bumper results yesterday, with British Gas-owner Centrica raking in a profit of £948million last year, up from £447million in 2020, as it cashed in on soaring energy costs. 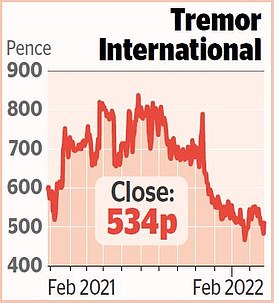 Tremor International climbed after delivering a record set of results.

The advertising specialist reported a profit for 2021 of £55.5million, swinging from a £4.5million loss the previous year, while revenues surged 61 per cent to £255million.

It also announced plans for a £56million share buyback.

Looking ahead, the group flagged an ‘ongoing resurgence’ in advertising demand as the economy recovered from the pandemic.

The group also benefited from customers using more gas in the first half of the year due to colder weather, while milder temperatures towards the end of the year had allowed it to sell some of its surplus gas and power as prices surged.

The company repaid a £27million loan taken from the Government to furlough staff during the pandemic while boss Chris O’Shea agreed to waive his £1.1million bonus as UK households braced for a sharp rise in energy bills.

There were very few bright spots in the market. However, Howden Joinery gained 4.2 per cent, or 30.8p, to 761.6p after posting record full-year results.

For 2021, pre-tax profit at the firm soared by 111 per cent to £390.3million while revenues jumped 35 per cent to £2.1billion as the pandemic sparked strong demand for new kitchens and bathrooms from consumers looking to improve their homes during lockdown.

Advertising giant WPP swung back into profit as the advertising market bounced back from the pandemic.

Blue-chip gold miners without large exposure to Russia cashed in as prices of the yellow metal surged amid a rush to safer assets.

Victorian Plumbing sank 8.4 per cent, or 6.9p, to an all-time low of 75.1p after warning rising costs will hit its profit margins.

harrry
Previous articleIs a VCT the right investment for you?
Next articleCan your council snatch a lump sum won in DWP state pension scandal?