Compass Group shares marched higher as the world’s biggest catering firm bounced back from the pandemic.

The stock rose 4 per cent, or 66.5p, to 1720p, its highest level since February 2020, just before the onset of the pandemic and lockdown measures sent shares plunging.

The surge came as Compass flagged that revenues for the three months to the end of December were at 97 per cent of 2019 levels after sales in the period jumped 38.6 per cent, well ahead of market forecasts. 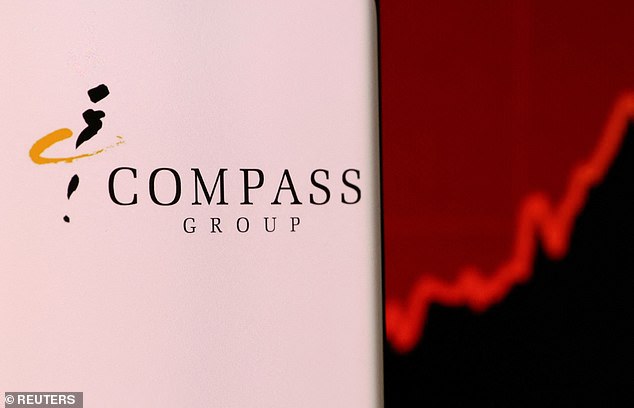 Recovery: Compass Group stock rose 4%, its highest level since February 2020, just before the onset of the pandemic and lockdown measures sent shares plunging

Compass noted that revenues surpassed 2019 levels across all areas of its organisation except its business and industry unit.

The strong performance was led by its North American market, which generated revenues that were 102 per cent of the same figure pre-pandemic.

However, the first quarter of 2022 may see ‘some impact’ from the rise of the Omicron variant as corporate clients delayed their return to the office.

It added the pandemic was causing some sports and leisure events to be postponed while several schools and other education facilities were extending remote learning.

Despite this, the group reiterated its full-year guidance, predicting revenue growth of 20 per cent to 25 per cent. 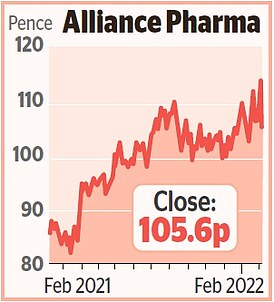 Alliance Pharma stumbled after it was hit with a fine by competition watchdogs.

The Competition and Markets Authority (CMA) slapped the group with a £7.9million penalty after concluding it had ‘conspired’ with other firms to ‘stifle competition’ in the supply of nausea drug prochlorperazine to the NHS, which had resulted in higher prices.

Alliance said it ‘fundamentally’ disagreed and would be appealing the CMA’s decision.

‘[Compass] has recovered well and looks likely to end up stronger post-pandemic than before, not least because of the boost to the overall market size created by the pandemic,’ said Steve Clayton, manager of the Hargreaves Lansdown Select funds.

He added: ‘Managers had too much on their plate to worry about what was going onto their workers’ plates in the canteen.

‘Compass can take that hassle away and often improve the catering offer in the process.’

Markets remained subdued as the ongoing cost of living squeeze loomed large. The 54 per cent hike in the energy price cap announced yesterday is expected to hit consumer spending at a time of delicate economic recovery.

The decision by the Bank of England to raise interest rates to control inflation may ease some of the pain caused by price rises, although the central bank’s prediction that inflation will hit 7.25 per cent in April spooked traders.

While bank stocks made early gains on news of the rate hike, they reversed course amid fears the pressure on household spending could dent loan demand.

Mining stocks provided upward momentum for the blue-chips amid hopes of strong global demand for commodities such as coal, copper and iron.

Pre-tax profit for the six months to the end of December came in at £84.2million, up from £43.4million in the same period a year ago, as its saw strong levels of demand for its components, particularly semiconductors and electronics.