Convenience store chain McColl’s lost over half its value as it teetered on the brink of collapse – putting around 16,000 jobs at risk.

The stock crashed 66.4 per cent, or 4.65p, to 2.35p after it confirmed it was in discussions with its lenders, following reports that it was scrambling to secure funding to stop itself going bust.

The firm raised £30million from investors in September last year. 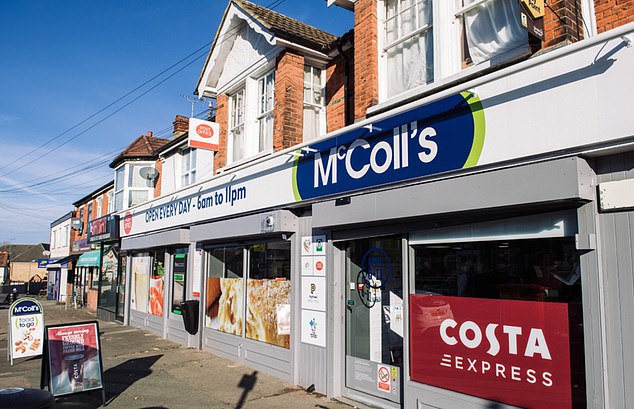 Jobs threat: McColl’s stock crashed 66.4% after it confirmed it was in discussions with its lenders, following reports that it was scrambling to secure funding to stop itself going bust

Petrol station giant EG Group and private equity firm TDR Capital were thought to have discussed a bid but pulled out last week, Sky News reported over the weekend.

However, the company said it had also received interest for parts of its business.

Among those thought to be sniffing around is Morrisons, which is in a partnership with the chain but could buy up thousands of its stores if it goes bust.

McColl’s woes came as it warned that the surge in Covid infections had dented the number of shoppers visiting its stores over Christmas.

As a result, its revenues for its first quarter were behind expectations and full-year profits were now predicted to be ‘slightly behind’ market forecasts.

Despite this, the firm believed it would be able to find a solution to its difficulties but would consider ‘all options’.

If it collapses it will be the largest insolvency in the UK retail sector in terms of employee numbers since 2020 when Edinburgh Woollen Mill Group fell into administration. 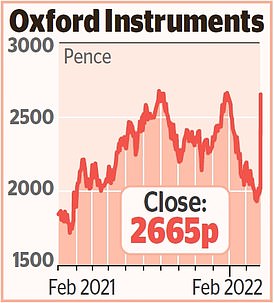 Oxford Instruments shot higher after revealing it has become a takeover target.

The firm, which makes products including X-ray cameras and microscopes, received an overture last Friday from rival Spectris for 3100p per share, a 53 per cent premium to its closing price that day.

Investors will receive 1950p in cash and 1150p in Spectris shares under the offer, which values it at just under £1.8billion.

Traders are also wobbling amid concerns the damage inflicted on the Russian economy could ripple out across the wider world.

GlaxoSmithKline slipped 1.2 per cent, or 18.6p, to 1545.4p after halting a trial of its potential vaccine for pregnant women against a respiratory virus that causes pneumonia in infants. It followed a pause last month after an alert from an independent safety panel.

It also came as the company held a capital markets day for its soon-to-be demerged consumer health business Haleon.

Plumbing and heating specialist Ferguson was flat at 11,415p after being hit with a downgrade by analysts at Jefferies.

The broker lowered its rating on the stock to ‘hold’ from ‘buy’ and cut the target price to 12,374p from 15,708p, saying the stock ‘may struggle to perform’ amid rising interest rates and the movement of its primary listing to the US, which could see it removed from the FTSE 100.

Gold miners outside Russia gained as investors piled in in search of a haven for their cash.

Logistics group Bunzl saw profits rise 2.3 per cent to £568.7million last year alongside a 1.7 per cent jump in revenues to £10.3billion as a recovery in its core business and acquisitions offset a drop in sales of Covid products.

Meanwhile, storage unit provider Big Yellow dipped 0.4 per cent, or 5p, to 1415p after its site in Cheadle, Greater Manchester, was destroyed by a fire on Saturday.

It is contacting 650 customers to assist with insurance claims.

harrry
Previous article
What Netflix.Com/Tv8 Is?
Next article
5 Podcasting Mistakes That Turn Away Listeners