Flutter Entertainment, the owner of Paddy Power and Betfair, topped the FTSE 100 risers after its boss wrote to regulators encouraging them to put the National Lottery back in British hands.

The business’s chief executive Peter Jackson has written to the Gambling Commission suggesting it award the contract, the largest in the public sector, to Italian gaming group Sisal.

Flutter Entertainment signed a deal to buy Sisal for £1.6billion back in December, meaning it will ultimately take over the lottery contract if the bid succeeds. 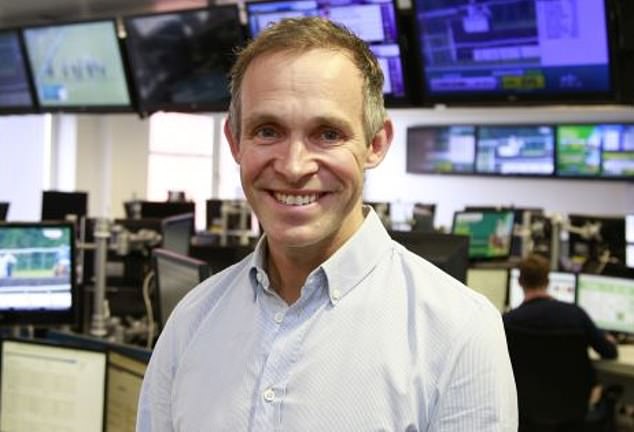 It could be him: Flutter boss Peter Jackson (pictured) wrote to the Gambling Commission suggesting it award the contract to gaming group Sisal which Flutter has signed a deal to buy

In his letter, Jackson stressed the importance of Sisal being part of a UK-listed business, while the two current favourites bidding for the contract are foreign-owned. The letter was first reported in the Sunday Telegraph.

The shares surged 4 per cent, or 425p, to 11005p following news of the intervention. Sisal is one of four suitors battling for control of the National Lottery in a hard-fought auction process that is expected to conclude in the coming weeks.

However, the Italian group is lagging behind two other heavyweights in the bidding war. 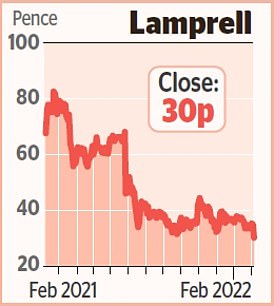 Oil rig and wind turbine builder Lamprell sank to a five-month low after its business was hit by lockdowns and travel restrictions brought on by the pandemic.

The company flagged that profits had been impacted in 2021 as Covid-19 disrupted supply chains and worker availability at its construction yards.

These interruptions had increased the group’s costs as it grappled with lower productivity and efficiency.

The National Lottery’s operator Camelot Group, owned by a Canadian pension fund, and Sazka, a betting firm owned by Czech billionaire Karel Komarek, are considered the front-runners in the race to snap up the contract.

Media mogul Richard Desmond, the former owner of the Express and Star newspapers, has also tabled a bid.

Whoever wins the contract will operate the National Lottery for up to a decade from 2024, over which time it is predicted to rake in revenues of around £80billion.

Other gambling stocks gained momentum following reports the Government has delayed proposals to reform UK gambling laws until May.

The blue-chip index continued to benefit from the defensive character of some of its biggest players as investors sought out safer stocks amid global market volatility.

Asia-focused insurer Prudential was one of the biggest risers, up 2.1 per cent, or 26p, at 1246.5p after analysts at JP Morgan rated the stock at ‘overweight’ with a 1550p target price.

Banking stocks were higher as the upward creep of interest rates raised hopes of higher profits.

Mid-cap iron miner Ferrexpo also surged 5.1 per cent, or 13.2p, to 271.2p as ore prices were supported by hopes of greater demand from China.

Oil prices dipped slightly following last week’s surge as talks between Iran and the US sparked hopes of more supplies of the black stuff.

Brent crude was hovering at around $93 a barrel after nearly hitting $94 late on Sunday.

BP crept up 0.7 per cent, or 2.75p, to 408.65p despite the price dip as investors predicted bumper profits in today’s annual results.

Online estate agent Rightmove added 0.9 per cent, or 5.8p, to 641.8p after analysts at UBS upgraded the stock to ‘buy’ from ‘neutral’.