MARKET REPORT: Google fuels a FTSE rally after its smashes expectations on Wall Street easing fears over US tech

As worries about technology stocks eased, the FTSE 100 index and the FTSE 250 were on the up.

The rally came after Alphabet posted profits of £15.2billion for the three months to the end of December, up from £11.2billion a year ago and ahead of expectations. 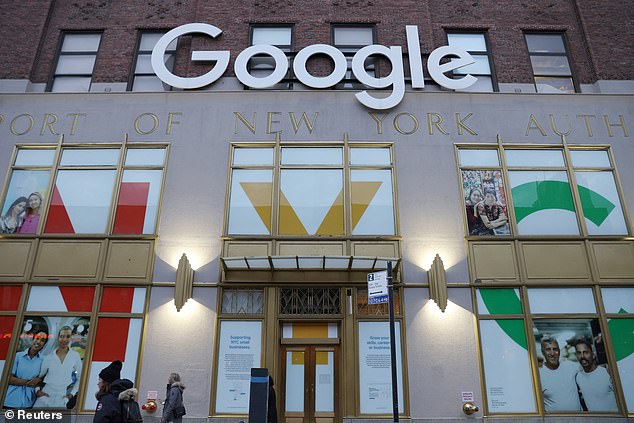 Google’s parent company Alphabet posted profits of £15.2bn for the three months to the end of December, up from £11.2bn a year ago and ahead of expectations

Revenues rose 32 per cent to £55.5billion. Despite jitters about the growth potential of tech giants, Alphabet said advertising revenues grew as the pandemic fuelled demand for digital ads on its websites.

Ad revenues jumped to £45.1billion in the quarter from £34billion a year ago. Boss Sundar Pichai said it enjoyed record quarterly sales for its Pixel mobile phones, though they are still far behind the dominance of rival Apple’s iPhones.

The firm also announced a stock split in a bid to make its shares cheaper. Alphabet shares were 8 per cent higher on Wall Street last night. 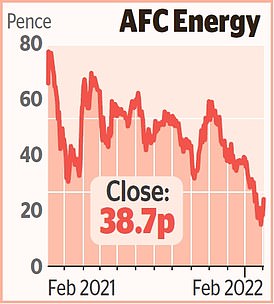 The firm, which develops technology to generate power from clean hydrogen, will provide its fuel cells to Extreme-E, an off-road racing series using all-electric SUVs.

Its technology will be rented to generate power for Extreme-E’s 2022 season, which will comprise five races across the world, and include motorsport giants such as McLaren Racing.

AJ Bell investment director Russ Mould said: ‘The technology sector started 2022 with some of the biggest question marks over it since the dotcom crash more than two decades ago.

‘However, the largest and highest quality US tech names continue to deliver the answers the market wants.’

The gains came ahead of results from Facebook owner Meta last night and Amazon tonight.

However, there was no respite for Paypal, which sank 25 per cent in New York as it joined the ranks of pandemic boom-to-bust stocks following disappointing results.

Some of London’s own tech firms received a boost, with online grocery group Ocado topping the blue-chip risers. It gained 5.7 per cent, or 81.5p, to 1512.5p after analysts at Credit Suisse double-upgraded the stock to ‘outperform’ from ‘underperform’ and hiked their target price to 1750p from 1500p.

The investment bank said that the current share price level, which is 45 per cent lower than it was 12 months ago, represented ‘a buying opportunity’.

Pharma giant Glaxosmithkline inched up 0.4 per cent, or 5.8p, to 1650p after its HIV drugs unit Viiv Healthcare reached a £921million legal settlement with US rival Gilead in a long-running patent row.

Under the agreement, Gilead will also pay a 3 per cent royalty on sales of an HIV drug to Viiv until 2027.

Blue-chip property group British Land climbed 0.4 per cent, or 2p, to 547.4p after snapping up a 12.5-acre warehouse site in north London for £157million.

A senior adviser at Virgin Money, Mark Thundercliffe, pocketed around £156,186 after offloading 82,203 shares for around 190p each on Tuesday, about equal to the company’s closing price that day.

Virgin Money shares rose 3 per cent, or 5.7p, to 195.9p after it also received a target price hike from Barclays.

Water company Severn Trent remained on track to invest over £500million to help clean up the country’s rivers and reiterated its full-year guidance.

The investment plans come after it was fined £1.5million by the Environment Agency in December for illegally discharging sewage into British waterways. The shares dipped 1 per cent, or 30p, to 2933p.

Meanwhile, mid-cap oiler Harbour Energy tanked 5.5 per cent, or 20.2p, to 345.2p as the boss of its European business, Phil Kirk, headed for the exit.