Shares in John Menzies rocketed by a third after it fought off the latest attempt at ‘pandemic plundering’.

The airport services group, which manages refuelling and baggage handling and de-ices planes, rejected a £469million bid from a Kuwaiti rival that it branded ‘entirely opportunistic’.

Agility Public Warehousing put forward a 510p-per-share offer, which Menzies boss Philipp Joeinig said did not reflect its ‘true intrinsic worth or its prospects’. 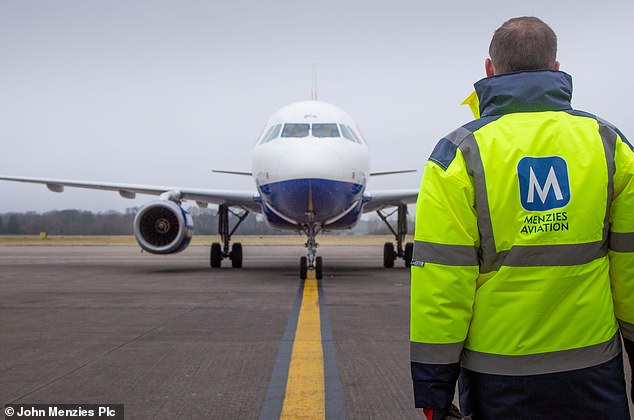 Shares up: Airport services group John Menzies, which manages refuelling and baggage handling and de-ices plane, has rejected a £469m bid from a Kuwaiti rival

Agility works in a number of fields and makes around £4billion in revenue each year. Menzies also revealed it had similarly rebuffed a previous 460p-per-share approach from Agility.

It argues that the bid is coming at a time when it is still recovering in line with the rest of the international travel industry, and that it will take more time for the company to fully rebound.

Founded as a bookseller in Edinburgh in 1833, it has focused on its aviation business since selling a newspaper distribution arm to private equity group Endless in 2018. It works at more than 200 airports in 37 countries and employs around 25,000 staff.

In its defence of the group, Menzies added that the effects of a £25million cost-cutting drive had yet to be seen in its finances. It may have more fuel for this argument in March’s full-year figures.

Menzies is one of just a few companies to outright refuse to enter merger talks because it feels it is undervalued but will bounce back stronger.

Others have fallen prey to overseas buyers – many of them are private equity groups – as the pandemic hit share prices. 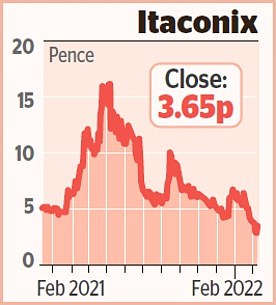 Itaconix rose after a potential customer began using one of its products in a trial.

The unnamed company, which supplies groups that produce nappies and hygiene products for women, is testing one of its plant-based absorbent ingredients.

If the trial is successful Itaconix could start generating revenues next year.

Shares in the firm, which makes ingredients used in soap, hair styling gel and dishwasher detergent, rose 23.7pc, or 0.7p, to 3.65p.

Menzies shares were turbocharged by the offer and the prospect that an even higher one or a bidding war might ensue. Its stock rose 42.7 per cent, or 143p, to 478p.

Dublin-based Smurfit’s profits rose 22 per cent to £770million last year as it hiked its final dividend to 8.1p per share.

The group, which supplies packaging for groups such as Nestle and Procter & Gamble, beat analyst forecasts as online shopping surged in the pandemic.

It rose 4.7 per cent, or 7.8p, to 174.96p after HSBC analysts said they believe it could be forced to spin off BA as Germany and France push to reinstate EU ownership rules.

Airlines that operate within the 27-member bloc must be ‘owned and controlled’ by member states, regulations instruct, though these rules are at the centre of Brexit trade talks so it could all be subject to change.

Chemring tumbled 2.9 per cent, or 8p, to 268p after Barclays cut the rating on its stock from ‘overweight’ to ‘equal weight’, and Tate & Lyle said it has picked Mars high-flier Dawn Allen as its finance boss.