Oil stocks rallied as prices of crude hit fresh highs at the end of the week. 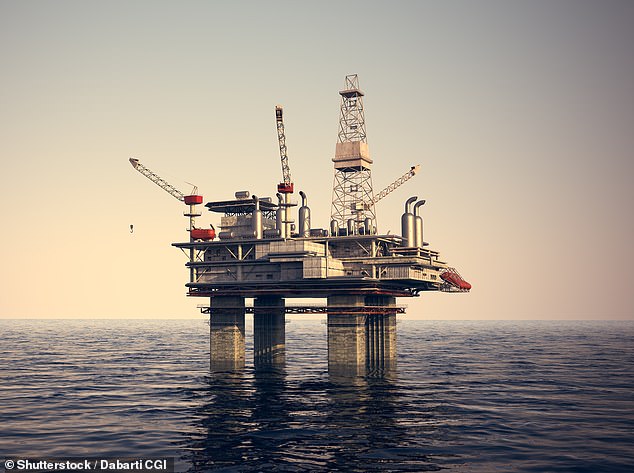 In at the deep end: The surge in demand as the global economy re-emerged from the pandemic has left supplies struggling to keep up as the world’s largest producers

Wood Group, which provides engineering and maintenance services to the oil and gas sector, rose 4.9 per cent, or 10.6p, to 229p.

Pressure on crude supplies has been ratcheted up further by reports that several oil transport and storage facilities across Germany, Belgium and the Netherlands have been hit by cyber-attacks.

While it is not yet clear who was responsible and whether the attacks were coordinated, the disruption adds to a list of factors that have helped to push oil prices higher in recent months.

The surge in demand as the global economy re-emerged from the pandemic has left supplies struggling to keep up as the world’s largest producers try to balance appeasing demand while also keeping prices profitable.

On Wednesday, members of Opec, which include Venezuela and Saudi Arabia, agreed to gradually increase oil production.

However, it has failed to stem the tide of rising prices, fuelling the surge in energy costs currently battering the UK and other large oil-consuming nations.

Richard Hunter, head of markets at interactive investor, also flagged that a winter storm sweeping across the US had increased the threat of supply disruption, pushing energy prices up further and ‘adding further grist to the inflationary mill’.

Added to all this is the ongoing tension on the Ukrainian border, with some analysts worried that an invasion of the country by Russia could see the latter’s oil and gas exports cut off from the market by US and European sanctions.

Instability in the Middle East and Africa could also disrupt supply. The surge in the price of crude may not be over yet, with some analysts including Goldman Sachs predicting that Brent could top $100 a barrel this year.

The Bank of England’s interest rate hike seemed to have unnerved some traders, as such moves tend to push up the value of the pound and put pressure on the earnings of blue-chip firms that make their money abroad.

Holding the Footsie back were copper giant Antofagasta, which dropped 2.5 per cent, or 31.5p, to 1227p as investors continued to fret about potential tax rises from the Chilean government.

Other large fallers included investment platform Hargreaves Lansdown (down 3.5 per cent, or 47.5p, at 1307p) and asset manager Intermediate Capital Group which dropped 4.2 per cent, or 80p, to 1846p.

Mid-cap miner Centamin, the operator of the Sukari gold mine in Egypt, were also on the rise, up 2.3 per cent, or 2.04p, at 91.1p, after one of its major shareholders Schroders increased its stake in the group to 5.1 per cent from 4.9 per cent.

Airtel Africa, a new entrant to the FTSE100 following the exit of miner BHP (up 0.2 per cent, or 5p, to 2420p), nearly doubled its profits amid booming revenues.