Global oil prices have continued to climb amid the war in Ukraine, lifting shares in Shell and BP.

Brent crude jumped to over $113 a barrel at one point, its highest level in almost eight years, on mounting fears that sanctions could see Russian supplies cut off. West Texas Intermediate climbed to $110 a barrel for the first time since 2014.

The surge came despite a decision by the International Energy Agency, which comprises 30 countries including the US and the UK, to release 60m barrels of oil from emergency stockpiles to reduce pressure on supplies. 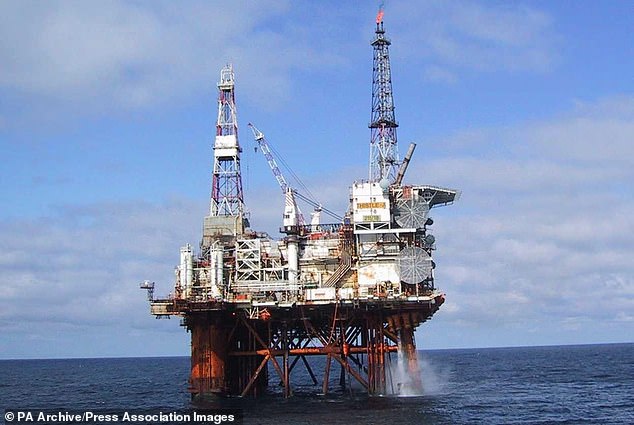 Gushing profits: Brent crude jumped to over $113 a barrel, its highest level in almost eight years, on mounting fears that sanctions could see Russian supplies cut off

It was a strong session for Britain’s housebuilders as big players cashed in on the UK’s property boom. Persimmon, London’s biggest listed builder, jumped 2.1 per cent, or 48p, to 2370p after posting a pre-tax profit of £973million for 2021, up from £863million the previous year.

Housebuilders have raked in billions in profits during the pandemic as record-low interest rates, cheap mortgages and a desire for bigger properties after months in lockdown saw buyers pile into the market, sending prices soaring.

The surge showed no signs of slowing yesterday, as data from Nationwide indicated the price of the average home topped £260,000 for the first time in February.

The increase means the average British home has added £29,162 to its value over the last 12 months.

Rival Workspace Group has made a £272million offer that has been backed by its directors.

Under the deal, investors will receive 209p in cash for each share they hold as well as 0.115 new Workspace shares.

The proposal values McKay at about 297p per share, a 33 per cent premium to its last closing price before the deal was announced.

Markets attempted to rebound following several sessions of intense selling as the fallout from Russia’s invasion of Ukraine left many stocks looking cheap.

Budget airline Wizz Air suspended all flights to and from Ukraine and Russia.

Despite this, it ascended 5 per cent, or 151p, to 3164p after it reported a 402 per cent year-on-year increase in passengers carried to 1.9m last month as pandemic travel restrictions were eased.

CMC Markets, the trading platform run by Tory peer Lord Cruddas, jumped 5.3 per cent, or 12p, to 240p after unveiling plans for a £30million share buyback as a result of its ‘robust capital position’.

Scottish engineering group Weir surged 10.4 per cent, or 158p, to 1678.5p as the cost of the damage inflicted by a cyber attack in September came in at the lower end of expectations. It also posted an 18 per cent rise in profits for 2021 to £209million as its orders climbed 22 per cent to £2.2billion.

The company, which allows consumers to buy and sell second-hand CDs and electronics, saw profits slump 14 per cent to £7.9million in the year to the end of November, while revenues slipped 5 per cent to £145.5million.