Vodafone was on the rise as it became the latest blue-chip firm to be targeted by an activist investor.

The FTSE 100 telecom group’s shares climbed 1.9 per cent, or 2.4p, to 130.02p after it emerged that Cevian Capital, one of the largest activists in Europe, has built up an undisclosed stake. 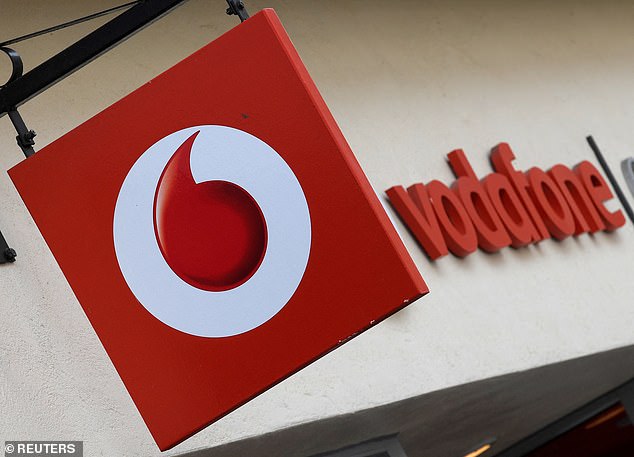 Good call: Vodafone shares climbed 1.9%, or 2.4p, to 130.02p after it emerged that Cevian Capital, one of the largest activists in Europe, has built up an undisclosed stake

‘Looking at the classic list of activist strategies, Vodafone is the sort of name which might pop up on a hit list – terrible share price performance, unwieldy group structure and potential for strong cash generation,’ said AJ Bell investment director Russ Mould.

However, he warned that Vodafone’s ‘monster’ £37billion debt pile could ‘limit the scope’ for increased share buy backs or higher dividends, and therefore Cevian may push for ‘a further refinement of the portfolio through mergers or sales’. 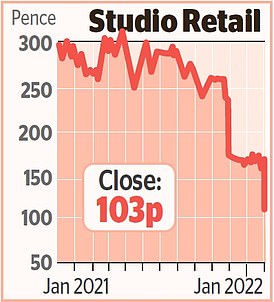 Studio Retail Group plunged to its lowest level in nearly a decade after issuing a profit warning yesterday.

The online seller of clothing, homeware, toys and gifts flagged ‘subdued’ demand for its products in early January, adding that supply chain disruption had increased its costs and led to late-arriving stock sitting unsold in its warehouses.

The firm forecast a full-year profit of between £28million and £30million, below market expectations of £35million.

London’s blue-chips ended the final session of January with a whimper after a volatile start to the year as investors warily eyed the risks posed by inflation, interest rate rises and tensions on the Ukrainian border.

The latter continued to support strong oil prices, with Brent rising more than 17 per cent in January to over $90 a barrel amid fears war in Eastern Europe will disrupt Russian energy supplies.

Victoria Scholar, head of investment at Interactive Investor, predicted Brent prices will remain ‘well supported’ in the near-term amid ‘robust global demand’ and a ‘drip feed’ of supply from the Opec+ cartel.

Shell, meanwhile, began its first day of dealings after merging its two classes of stock into one following its relocation to the UK from the Netherlands.

Scottish Mortgage Investment Trust, which counts US tech giants such as Tesla in its portfolio, added 5 per cent, or 51p, to 1079p as investors returned to technology stocks following a selloff earlier this month.

However, more defensive stocks which received interest during the market rout last month went into reverse, with mining giant Anglo American down 2.8 per cent, or 93.5p, at 3228p while tobacco group Imperial Brands slipped 0.9 per cent, or 15p, to 1751.5p.