Bettany Hughes, the TV historian, hates paying over the odds for clothes, preferring to buy second-hand outfits from charity shops.

The 54-year-old academic and broadcaster told Donna Ferguson she has never owned a credit card, nor made any major mistakes with money. But she is prepared to spend £135 on a massage as a treat because of the ‘weird positions’ she often finds herself in, crawling through tombs while filming at historic sites.

Her new Channel 5 series Tutankhamun: Waking The Dead starts on Friday at 9pm. 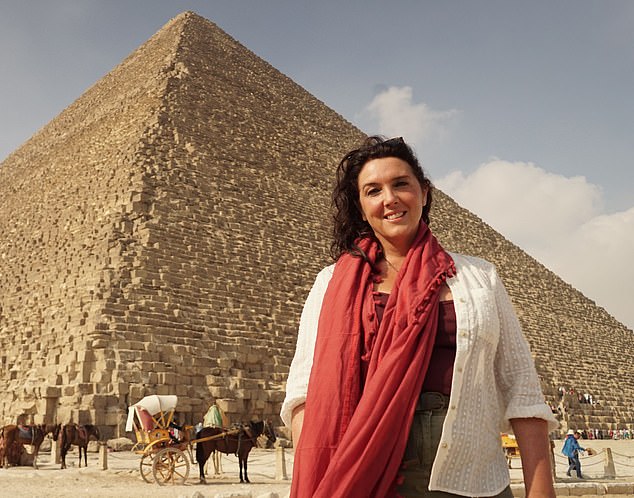 Treat: Academic and broadcaster Bettany Hughes likes to have a massage while filming

To be resourceful with what you have – and always plan for the worst. Both my parents, Peter and Erica Hughes, were actors. Their income was unpredictable, although my father would occasionally pop up on TV – for example, he was in detective series Bergerac.

They grew up during the war and believed in being self-sufficient. They would grow vegetables and bake their own bread. My father, in particular, never took anything for granted. He did not know his father and he provided for himself from the age of 15 when his mother died. So I was brought up with a sense that money should never be wasted.

No, I’ve never struggled. I have always been careful with money and lived within my means. I’ve not had a credit card, nor spent more than what I have. I was brought up to think that if work came along I was lucky to have it. So all my life I have worked six or seven days a week.

When I was doing my academic research before I became a TV historian, I would also teach and lecture. But that was never a problem for me because I love what I do. I have always managed to make my expenditure meet what I earn.

Probably 2003. I had a deal for two books – one on Helen of Troy and the other on Socrates. I also did three television series in that year. Overall, I think I earned £75,000. But I was working at least 80 hours a week. My kids called my books ‘the treacherous books’ because they hated the fact that the door of my study was closed when I was writing.

It was a beautiful white tuxedo jacket from Selfridges for £200. I have always loved second-hand clothes and so, from the age of 15, I’ve bought my clothes second-hand and from charity shops.

I bought that white jacket when I was about 30 because I suddenly thought, this is ridiculous, I’ve got to sometimes buy new clothes. The first time I wore the jacket was for the wrap party of the TV series I’d been doing. A colleague fell over and cut her wrist on a glass and I took her to hospital. She was fine, but there was a lot of blood and my jacket was ruined. I took that incident as a sign that I shouldn’t have bought it. So it was the first and last time I bought anything expensive, brand new and at full price.

What’s the most valuable item you’ve ever touched?

The golden slippers of Tutankhamun that were left in his tomb. I touched them last August when I was filming my new Channel 5 series. They are almost 3,500 years old. You can’t even put a value on objects like that. They are priceless. When you touch something that old, you feel a connection to the past – and you realise that what mattered to them matters to us. We still love beautiful shiny treasure.

I don’t think I’ve made any major money mistakes. I’m just so cautious with money.

Buying my home, a four-bedroom semi-detached house in West London, in 2003 for £205,000. It was a stretch for us at the time. Obviously, it is worth a lot more now, but I have no idea how much. I don’t even want to think about it. It’s the best money decision I have ever made because it has meant my husband and I have had a secure family home in which to bring up our kids. We’ll probably end up being taken out of there feet first. 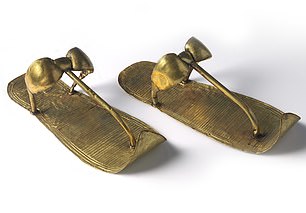 Priceless: The golden slippers of Tutankhamun that were left in his tomb

Yes. I started during lockdown. A bit late, some would say given my age, but at least I’ve started. In the past, my income has been unpredictable and it has not been easy for me to plan ahead. It always felt like a welcome surprise when money came in. Also, I had other financial priorities. In lockdown, I suddenly thought: I’m approaching pension age and I haven’t got a pension.

Do you invest directly in the stock market?

Not outside my pension. I spend a lot of time thinking about things and making money isn’t one of them. Also, I work hard to earn my money and I like to know what I’m spending it on. Somehow, putting my money out into the big investment world doesn’t feel like what I want to do with it. I want to see what I’m buying.

I like a massage wherever I am in the world. When I’m doing TV shows, I am often in really weird positions – crawling through tombs or hanging off the edges of ancient sites. So a massage is my treat to myself. I will spend anything from £35 to £135. I have about four a year.

If you were Chancellor, what is the first thing you would do?

I would increase funding to councils to improve people’s access to education at all points of life – from cradle to grave. I think education should be more accessible pre-school and beyond school.

Yes, to Shelter, the charity for homeless people. If there’s one thing history teaches you, it’s cause and effect. It is so easy to end up homeless in a couple of steps. And it’s incredibly difficult to fulfil your potential if you don’t have a home.

To make sure I’m not a burden on my kids so they can spread their wings.

harrry
Previous articleWhy is Lloyds Bank set to axe up to 100 MORE branches?
Next articleHow to save water and stay liquid as bills are set to soar