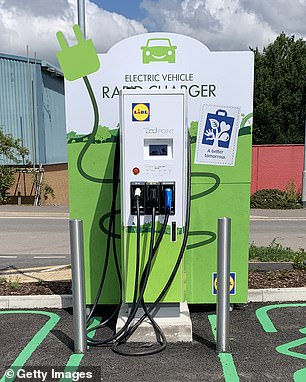 BP and Shell are both investing heavily in electric vehicle chargers, but Pod Point is ahead of them both – at least in the UK.

The company has installed more than 90,000 chargers across the UK, far outstripping the oil and gas majors.

Most Pod Point chargers are set up in drivers’ homes, but the kit is being rapidly installed in other convenient spots, such as car parks, shopping malls, petrol station forecourts and workplaces.

Pod Point listed on the stock market in November at £2.25 and the shares have since fallen back to £2.03.

The current price offers investors an attractive entry point to a business that is on the right side of the Government’s green agenda and is helping motorists to save money at the same time.

Pod Point was founded in 2009 by Erik Fairbairn, a mechanical engineer turned entrepreneur, with a mission to make it simple for motorists to switch from traditional cars to electric ones.

Many motorists are put off electric vehicles for fear of running out of power in the middle of nowhere. Fairbairn strives to counter this by installing charging points in places where they tend to spend time, such as where they live, work and shop.

Pod Point also installs, manages and maintains its chargers, to facilitate the experience of going electric.

It supplies chargers to property developers such as Barratt, Bellway, Berkeley Group and British Land.

Supermarket chains Tesco and Lidl have signed up with Pod Point too, alongside car park operators, transport firms such as DPD and Hermes, and manufacturers, including Nestle and PepsiCo.

Results this week should show that Pod Point is motoring. Today, fewer than 1 per cent of the cars on UK roads are electric, but 25 per cent of all vehicles sold in December were electric so momentum is building fast.

The trend is expected only to accelerate over the next decade, on both ecological and financial grounds.

Even after April’s price hike, electric cars will still be at least 60 per cent cheaper to run than the petrol-fuelled equivalent.

Pod Point has some clever technology too which means that chargers can deliver more power when demand for electricity is low and prices fall – in the middle of the night – and rein in when there are power surges or even when individual homes are using lots of energy.

Midas verdict: Like all young businesses, Pod Point is not without risk, but the company is in the right place at the right time. Fairbairn is highly ambitious and, at £2.03, the shares are worth a punt, especially for the environmentally conscious investor.

harrry
Previous article
Celebrate the Super Bowl With a Bowl Cut Hairstyle
Next article
500,000 families to lose some of their child benefit