A British tech entrepreneur could be extradited to the US within days after he lost a key court battle.

Mike Lynch, who was once dubbed Britain’s answer to Bill Gates, faces fraud charges in America over the sale of his software company Autonomy to Hewlett-Packard (HP) in 2011.

The US has accused him of cooking the books at his former firm before it was sold to HP for £8billion. 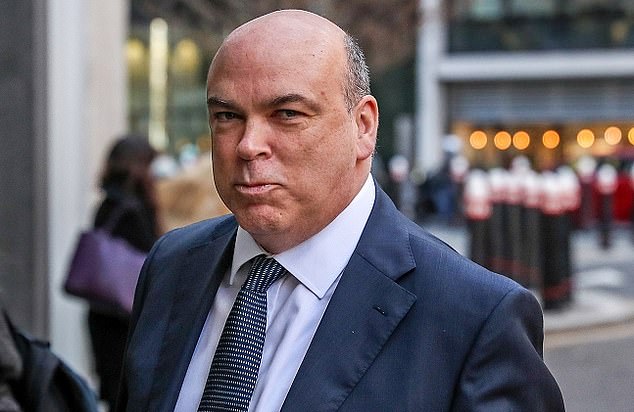 Extradition: Mike Lynch, who was once dubbed Britain’s answer to Bill Gates, faces fraud charges in America over the sale of his software company Autonomy to Hewlett-Packard

The 56-year-old, who denies the allegations, could spend a decade behind bars if he is found guilty.

Lynch had asked a High Court judge to overturn a previous ruling in which another judge refused Priti Patel’s request to delay making a decision on his case.

The Home Secretary has the final say on whether he is extradited. Patel wanted to push back delivering her verdict until March in order to see the outcome of a civil lawsuit brought against Lynch, which is expected to be released within weeks.

The multi-millionaire argues that this could clear his name. Patel will now have to make a final decision by the end of this week after the latest ruling.

However, lawyers said Lynch would appeal if the Home Secretary agrees to extradite him, leading to another lengthy court process in the UK.

Lynch, a married father-of-two, would be among the most high-profile businessmen to be sent to the US since the so-called ‘Natwest Three’ were extradited in 2006 as part of the Enron scandal.

Bankers Giles Darby, David Bermingham and Gary Mulgrew were each sentenced to 37 months in prison after reaching a plea deal.

The tech tycoon’s team has called for the extradition to be blocked on grounds that the claims against him mostly concern actions in the UK and must be dealt with by the British justice system.

Lawyers for the US government say he ‘aimed dishonest activities at the USA on a monumental scale’ and should not be ‘immune from the American justice system’.

Lynch has been accused of inflating the value of Autonomy and making misleading statements about its performance before it was sold to HP.

Within months of the sale completing HP was forced to write down its value by £6.8billion. The Cambridge graduate founded Autonomy in 1996 and grew it into a FTSE 100-listed software developer.

US authorities have charged him with more than a dozen counts of wire and securities conspiracy.

He denies all the charges against him and claims that HP failed to do proper research when it bought Autonomy.

His lawyers have claimed he faces ‘degrading’ treatment in a US prison if he is extradited – warning that he suffers from unspecified complex health problems and that if he was forced to share a jail cell with other inmates without private space he risks developing infections.

In the separate civil action Lynch is fighting a High Court battle with HP Enterprise, a company that was formed when it split from HP in 2015.

HP Enterprise has launched a £3.7billion damages claim against him.