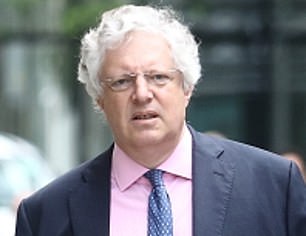 The Ministry of Defence is gearing up for a legal battle with private equity baron Guy Hands over a property deal which has cost the taxpayer up to £4.2billion.

John Major’s government sold 55,000 homes designed for military personnel and their families to Hands’ Annington Property in 1996. Under the agreement, the MoD then leased the homes back for 200 years.

But the National Audit Office has estimated the taxpayer is between £2.2billion and £4.2billion worse off because of the deal. In a written statement tabled in the House of Commons, Defence Procurement Minister Jeremy Quin outlined plans to ditch the agreement and take back the properties.

He said: ‘Given our obligations to secure value for money, we have reviewed MoD’s current arrangements with Annington and now set out the steps that MoD is taking to deliver greater value for money for the taxpayer in relation to service family accommodation.’

These steps included exploring its rights to buy back the properties, which the MoD thinks could be cheaper than continuing to rent them from Annington.

The MoD said it would start with one home, in the Lincolnshire village of Cranwell, as a test and make claims for further houses if that goes well.

But the spat is likely to end up with the MoD going head-to-head with Hands in court.

Annington – which Hands owns through his private equity group Terra Firma –said the MoD has ‘no legal right’ to take control of the Cranwell house or any others.

It added: ‘Annington will be taking all legal steps available to it to resist the MoD’s claim on this single house and any other enfranchisement rights claims brought by the MoD, should they be forthcoming.’

The battle could hit Hands’ plans to sell Annington. He began scouting for buyers earlier this year, after Annington and the MoD settled how much the Government should be paying in rent in late 2021.