Moonpig has upgraded its full-year sales forecast following a busy trading period amid the emergence of the Omicron variant of coronavirus.

The online greeting card seller had previously estimated that it would secure between £270million and £285million in revenue for the 12 months ending April, but it now expects to earn around £300million.

This figure would still represent a significant decline from the last financial year when harsh lockdown measures encouraged more Britons to purchase their cards online, but would still be around 75 per cent above 2019/20 levels. 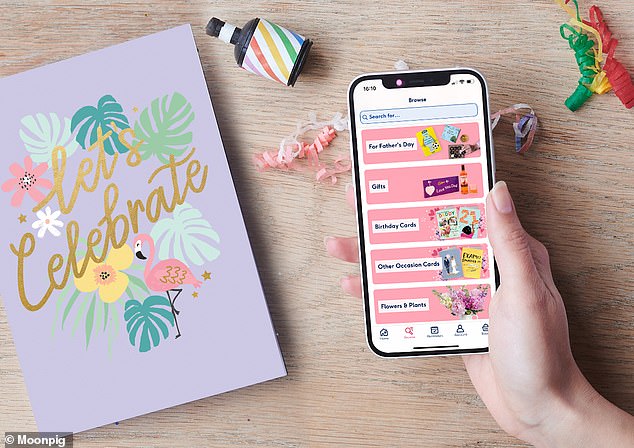 Enhancement: The greeting cards seller had previously estimated that it would secure between £270million and £285million in revenue for the 12 months ending April

Trading on the firm’s website inevitably slowed down after lockdowns ended and bricks-and-mortar shops reopened, yet it underwent a revival when the UK Government introduced ‘Plan B’ restrictions in response to the Omicron variant.

These regulations included advice to work from home if possible, mandatory masks in most indoor public venues, and a legal requirement to self-isolate among people who test positive for Covid-19.

Moonpig, which was founded by former Dragons’ Den star Nick Jenkins, stated that the enhanced forecast reflected the effect this highly transmissible but less deadly variant had on customer behaviour during late December and January.

But even after Covid-19 regulations were relaxed in England in late January, the company noted that sales over the following two months were strong enough to suggest a ‘permanent uplift’ in customer activity relative to pre-pandemic volumes.

‘Moonpig Group has delivered a permanent step change in scale over the past two years, with a larger customer base displaying higher loyalty than pre-pandemic. 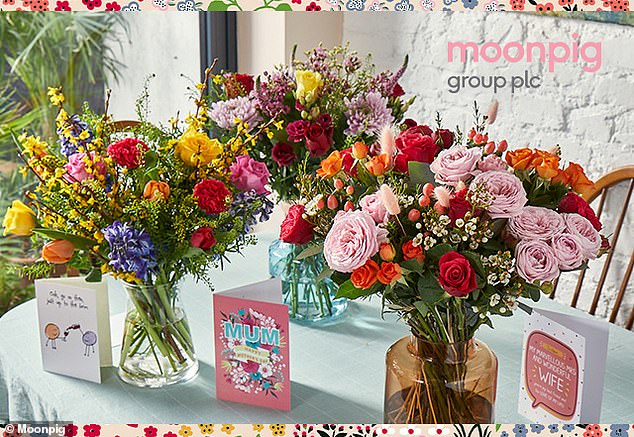 Expansion: To widen its customer reach, Moonpig has struck multiple new partnerships with retailers, including a gift and flowers collaboration with Cath Kidston

‘The long-term opportunity remains vast, and we have never been in a better position to deliver against Moonpig Group’s strategy to become the ultimate gifting companion.’

In addition to the higher revenue outlook, the business has maintained its medium-term target to have an adjusted underlying earnings margin rate of 24 per cent to 25 per cent.

Alongside this, the London-listed firm is aiming for mid-teens percentage growth in underlying revenue, which it hopes to achieve by investing in its technology platform and operations network.

To widen its customer reach, Moonpig has struck multiple new partnerships with retailers, including a gift and flowers collaboration with Cath Kidston and a wine collection with Virgin Wines.

AJ Bell investment director Russ Mould said: ‘Moonpig has yet to convince cynics that a boom in sales in the past few years was not simply down to people being stuck at home and not being able to get to the shops to buy their greetings card, thus they tried the online alternative.

‘The fact Moonpig’s upgraded sales guidance is attributed to another wave of Covid in December and January only adds fuel to the fire that it is purely a pandemic winner.

‘It needs to show decent growth at a time when consumers are free to shop wherever they want, as that will be the true indicator whether someone now prefers to buy cards online or go back to the old ways of picking one off the shelf on the high street.

Moonpig shares were up 0.4 per cent to £2.39 during the late morning on Tuesday, but have fallen by more than a third over the last three months.