Watchdogs have warned the £7billion private equity takeover of Morrisons could lead to higher petrol prices.

The Competition and Markets Authority found 121 areas where both the supermarket and New York-based Clayton, Dubilier and Rice own forecourts.

The regulator said this could lead to higher fuel prices as the firms would face little competition. 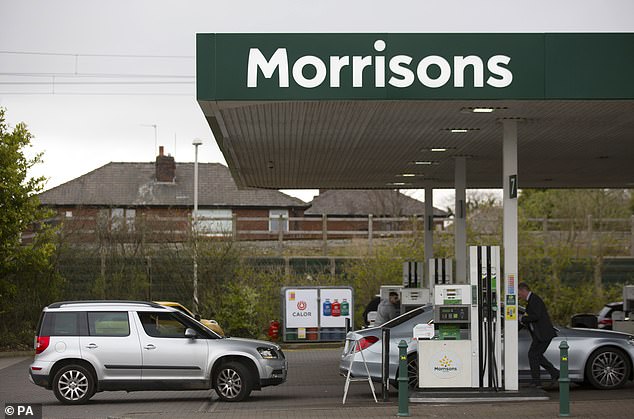 Competition concerns: Morrisons – which has 339 petrol stations – was bought by Clayton, Dubilier and Rice last October after a bidding war against rival private equity firm Fortress

It gave CD&R five days to submit proposals to address its concerns after which it will decide whether to launch a full investigation.

The CMA said its findings were particularly important against the backdrop of record high petrol prices. The average cost of a litre of petrol at forecourts yesterday was 167.3p, while diesel was 179.7p.

CMA senior merger director Colin Raftery said: ‘Record high petrol prices make it even more important that we don’t allow a lack of competition at the pump to make the situation worse.

We are concerned this deal could lead to higher prices for motorists in some parts of the country.

‘But if CD&R and Morrisons are able to address these concerns, then we won’t need to move on to an in-depth investigation of the merger.’

CD&R owns Motor Fuel Group, the UK’s biggest independent forecourt operator, with 921 petrol stations across brands such as Texaco, BP and Shell. Morrisons has 339 petrol stations, almost all at its supermarkets across the UK.

Just days later, the CMA filed an enforcement notice requiring Morrisons to stay independent while it decides whether it needs to investigate the deal.

And in January it launched an initial probe into the deal, citing fears that the merger would create a group controlling more than 1,200 of the country’s 8,000 petrol stations.

A key part of CD&R’s interest in Morrisons was the opportunity to expand its convenience store chain across MFG forecourts.

But it has since emerged that CD&R is looking for a buyer for MFG, which could be worth up to £5billion.

The CMA’s announcement means that Morrisons or CD&R could be forced to sell their forecourts in the 121 areas it noted.