Moscow Stock Exchange reopens after being closed for nearly a month

The Moscow Stock Exchange partially reopened yesterday after being closed for nearly a month following Russia’s invasion of Ukraine.

The bourse was shut on February 25 after the initial offensive sparked a wave of sanctions by Western countries that sent Russian equities into freefall and caused the value of the rouble to plunge.

The subsequent shutdown was the longest in Russia’s modern history. 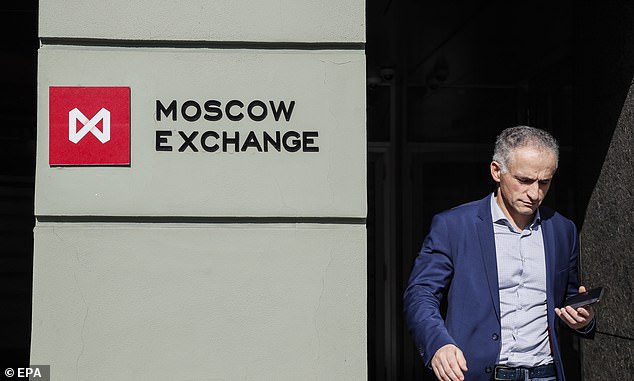 Back in business: The Moscow Stock Exchange  was shut on February 25 after Western sanctions sent Russian equities into freefall and caused the value of the rouble to plunge

But trading resumed yesterday, albeit under heavy restrictions with short selling banned and foreign investors barred from exiting the market under rules introduced by Vladimir Putin’s regime to stop money leaving the country.

Putin has also authorised Russia’s National Wealth Fund to spend up to £7.4billion to buy Russian shares in a bid to shore up the market.

Around 33 Russian stocks were authorised for trading, including oil and gas giants Gazprom and Lukoil, and state-backed lender Sberbank.

The two energy firms were among the best performers during the shortened session, while airline Aeroflot was one of the top losers after dropping over 15 per cent.

The Russian benchmark Moex index ended 4.4 per cent higher on the day, but it was still down sharply on pre-war levels.