Moto, the country’s biggest motorway service station operator, is cutting the cost of fuel at five of its forecourts by 15p a litre.

The group said the cuts will help bring motorway fuel prices in line with High-Street forecourts and within 10p of prices charged at supermarket forecourts.

On average, Moto said the price reductions, which could spread to all its 47 forecourts at some point, looked set to save motorists around £7 a pop when they fill up their tank. 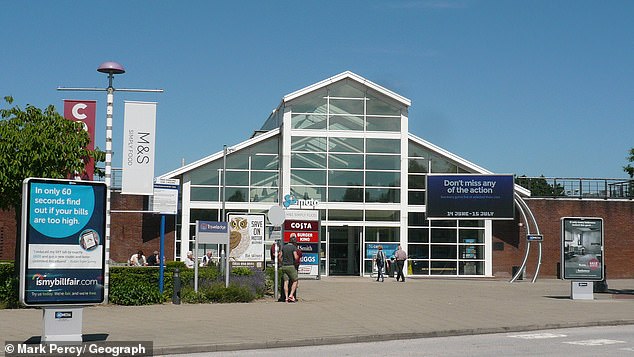 Motorway cuts: Moto, the country’s biggest motorway service station operator, is cutting the cost of fuel at five of its forecourts by 15p a litre

The decision on price cuts was made after Moto was granted permission by National Highways  to display new digital fuel price signage on motorways, with installations and price cuts launching at five sites over the coming months.

Moto boss Ken McMeikan, said: ‘Today marks a hugely important next step in improving fuel price transparency on the motorways and in helping motorists’ money go further. We want to move quickly to install the signage and reduce prices at our sites as fast as we can.

‘We have worked tirelessly to show National Highways that the new signage is a very sensible measure that will allow us to reduce prices for motorists.

‘If other motorway operators also look to install the new fuel signage and lower prices at their sites, motorists will see fuel prices comparable to local high street forecourts up and down the UK’s motorways.’

The approval for the new displays followed a trial of the motorway signage at Moto’s Frankley site last year. Moto said: ‘The trial showed that a greater number of motorists turned into its Frankley services, which meant fuel prices could be dropped for all.’ 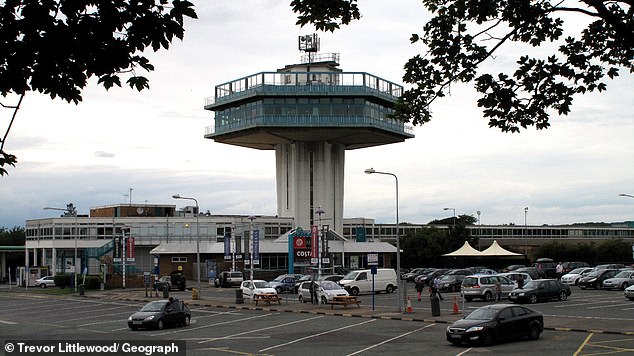 Price points: The decision on price cuts was made after Moto was granted permission by National Highways to display new digital fuel price signage on motorways

RAC fuel spokesperson Simon Williams said: ‘Moto’s bold decision to lower the cost of filling up at its service areas should permanently transform motorway fuel retailing for the benefit of everyone on the road.

‘For years drivers have been confused as to why motorway fuel is so expensive and, as a result, many have actively avoided buying fuel at services, or only topped up with the bare minimum to get them to their destinations.

‘Now drivers will be able to fill up on the motorway safe in the knowledge that they’ll be paying a fair price.

‘We strongly urge all the other motorway service operators to follow Moto’s lead and give the UK’s drivers a better deal at their pumps.’

Cost of filling up rising but motorists get fairer deal

The cost of filling up a motor at the forecourt is on the up again as oil prices surge to the highest level in over seven years, fresh figures from RAC Fuel Watch reveal.

But, drivers are getting a slightly better deal than they were previously, as fuel suppliers are seeing their profit margins return to more normal levels as they absorb a bigger slice of the cost hikes themselves.

With oil prices now hovering around the $90 a barrel mark, wholesale petrol and diesel prices rose by 4.9p and 3.6p respectively over the past month.

As fuel suppliers finally shoulder a higher proportion of cost spikes, consumers saw pump prices increase by less than 1p for both petrol and diesel in January. 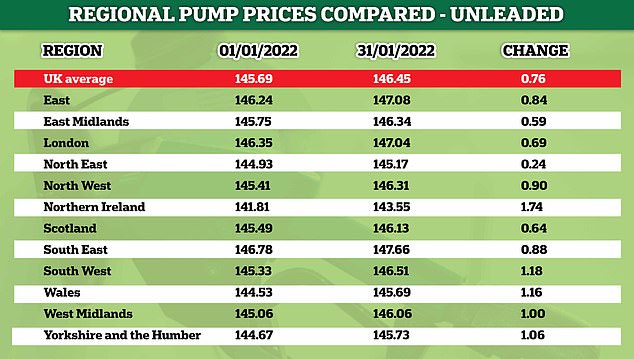 Variations: A table showing how the cost of unleaded petrol has changed in the past month

The average cost of a litre of unleaded petrol now stands at around 146.45p, with a litre of diesel costing about 149.81p, according to the data.

In January, RAC figures showed that the average profit margin made by retailers on a litre of petrol stood at 11.4p, down from 16.4p in December.

RAC Fuel Watch said today: ‘While this is still significantly higher than the long-term average of around 6p, it’s a step in the right direction in delivering better value for drivers when they fill up.

‘The average margin on a litre of diesel is now back to more normal levels at 8p, down from 12p in December.’ 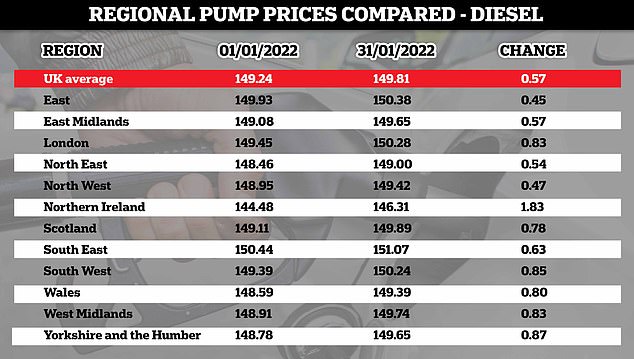 On the up: The cost of diesel and unleaded petrol is on the up, RAC Fuel Watch said

RAC fuel spokesman said: ‘At long last, retailers appear to have heard our clarion calls for drivers to be charged fairer prices at the pumps – something that is so important as the effect of high inflation bites and households up and down the country brace themselves for what looks like an inevitable cost of living squeeze.

‘On average, retailers are now making a more normal profit for each litre of fuel they sell than they did in December which makes today’s pump prices – although up slightly on December – more justified.’

But, Mr Williams thinks ‘storm clouds are gathering’ as soaring oil prices mean wholesale fuel prices will continue going up, making it increasingly likely that retailers will pass on more of these costs on to consumers at the pumps in the not too distant future.

RAC Fuel Watch is urging fuel providers to ‘treat drivers with respect by fairly reflecting the movement in the wholesale fuel market and not taking overly high margins.’

Mr Williams said: ‘If they were to increase their margin and hike prices beyond what’s justified it would be devastating for hard-pressed drivers.’

RAC Fuel Watch said it will be keeping a close eye on fuel retailers to ensure drivers are not being taken advantage of at the pumps.

FairFuelUK, led by Howard Cox, is calling on the Government to cut or at least maintain fuel duty levels, and wants to see the creation of ‘Pumpwatch’, an independent fuel pricing watchdog.

harrry
Previous article
Fashion Bomber of the Week: Bruce from Texas
Next article
Inflation in the eurozone soars to a record high