Motor industry has invested £10.8bn in Britain’s EV revolution in a decade


The automotive sector has invested £10.8billion into Britain’s drive to become a leading powerhouse for electric vehicles in the last decade, new analysis has revealed.

The total sum has been calculated by totting up all funding towards EV production and battery-making gigafactories in Britain since 2011, which has brought with it 14,320 new jobs, the analysis claims.

Revealing where investments have been made in different parts of the country, the motor trade body has called on stakeholders to match industry’s commitment to the UK’s electric revolution and highlighted a lack of incentives and charging infrastructure as major hurdles for the future. 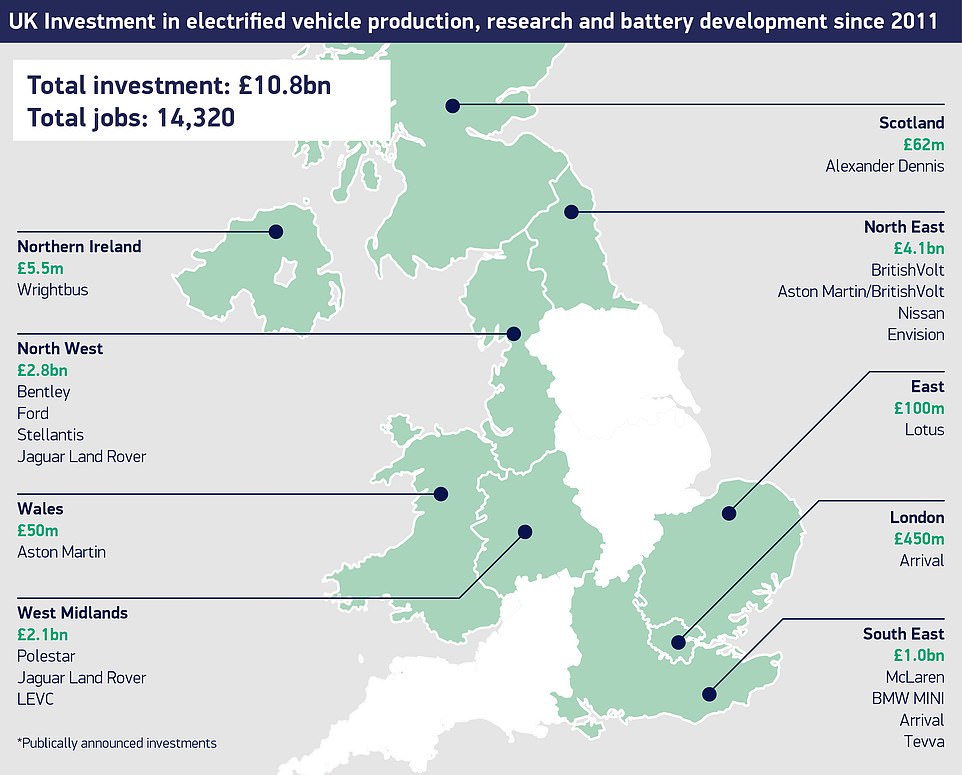 Britain’s first electric decade: Some £10.8billion investment has been made in the UK to boost the country’s position to become an EV powerhouse, according to new analysis

In what the Society of Motor Manufacturers and Traders calls ‘Britain’s first electric decade’, the first major investment was the £420million spent by Japanese car maker Nissan from 2011 to upgrade its Sunderland plant to build the country’s first mass-produced battery electric car, the Leaf.

More than 10 vehicle manufacturers have invested in communities across the country to create jobs and to design, engineer and build the cleanest, greenest vehicles for domestic and export markets.

These include Aston Martin, Bentley, Ford, Jaguar Land Rover and Mini to name just a few.

Alongside cars, the UK also produces electric taxis, vans, buses and trucks, as established manufacturers and new entrants have invested in building plug-in models in Britain. 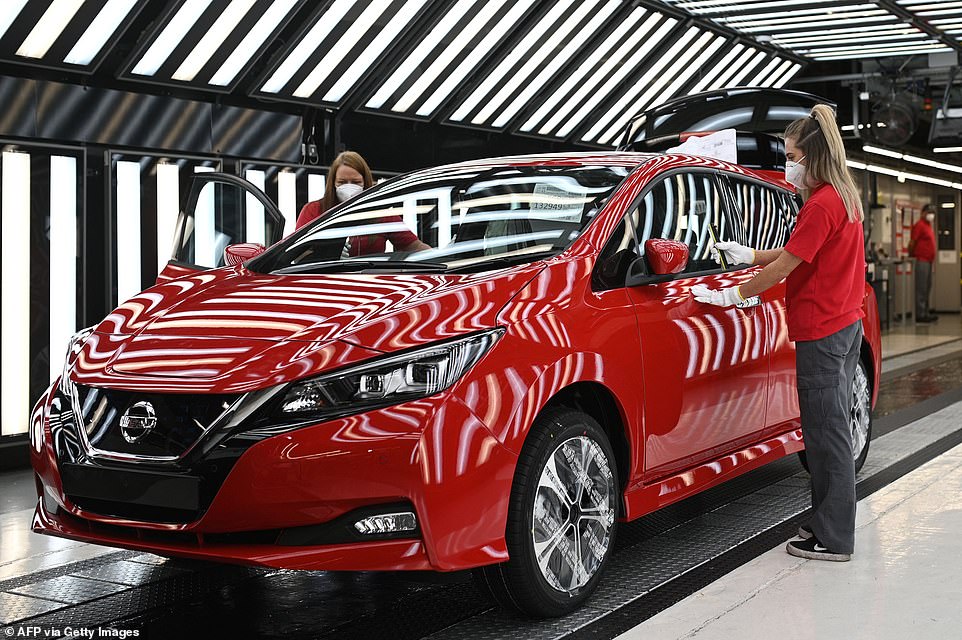 The first major investment was the £420million spent by Japanese car maker Nissan from 2011 to upgrade its Sunderland plant to build the country’s first mass-produced battery electric car, the Leaf 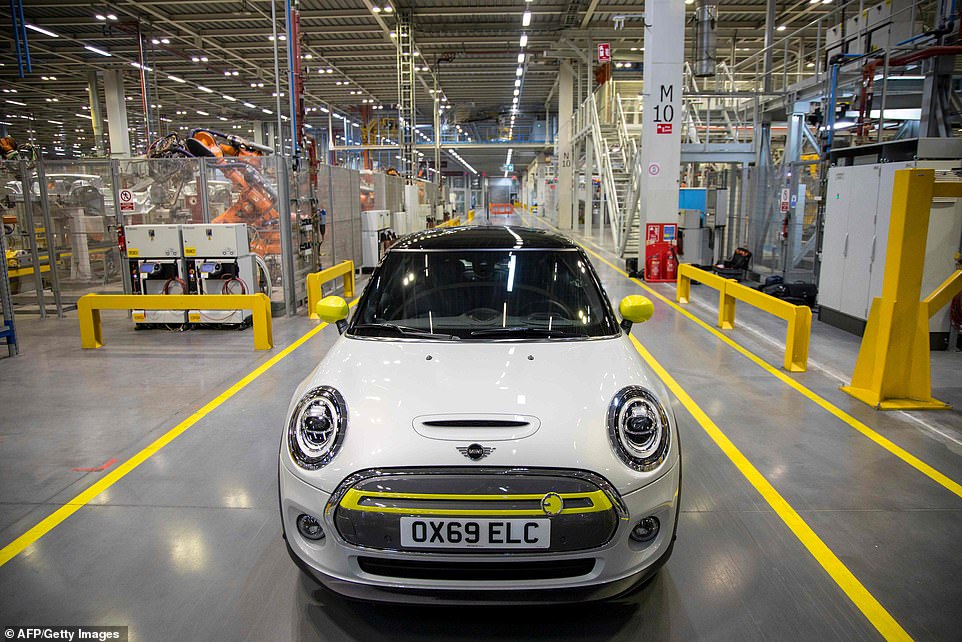 More than 10 manufacturers have invested in communities across the UK to create jobs and to design, engineer and build green motors. This includes Mini’s Oxford plant where the Mini Electric is produced 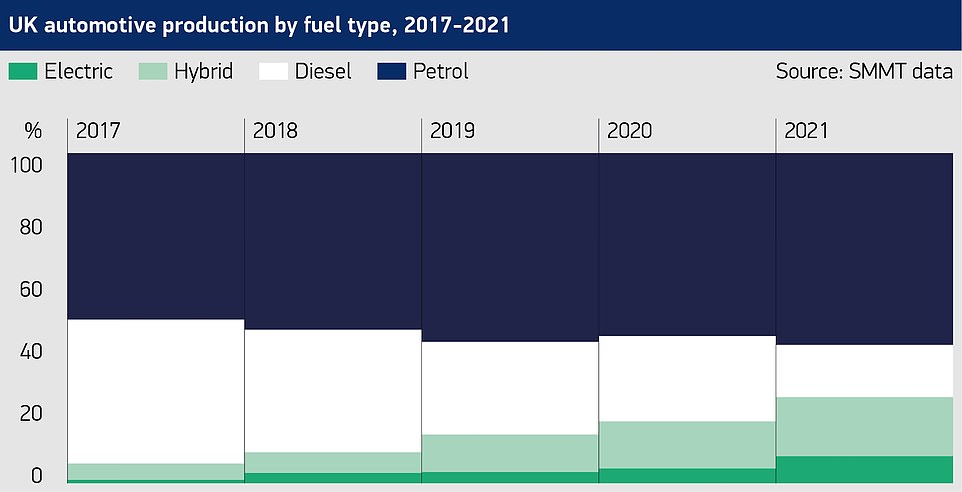 In more recent years there has been substantial investment in delivering battery-making gigafactories to power vehicles of the future.

The first will be Britishvolt’s 235-acre site in Blyth, Northumberland, shortly followed by the Nissan-Envision AESC facility being built next to the Sunderland car factory.

Both projects have been subject to huge financial backing (£1.7billion and £1billion respectively) – including some government funding along the way – in the hope it will boost the UK’s desirability to manufacturers considering where in Europe to build their next-generation EVs. 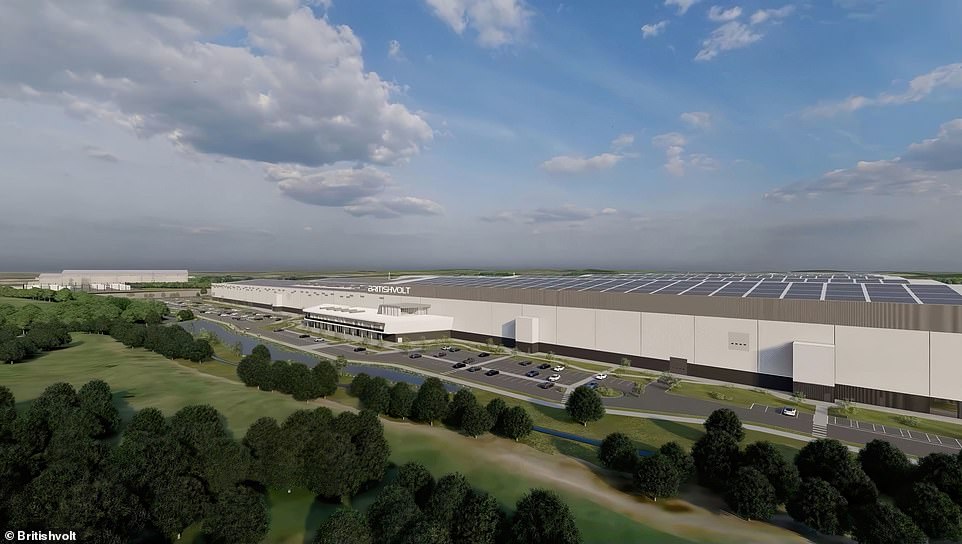 In more recent years there has been substantial investment in delivering battery-making gigafactories to power vehicles of the future. The first will be Britishvolt’s 235-acre site in Blyth, Northumberland 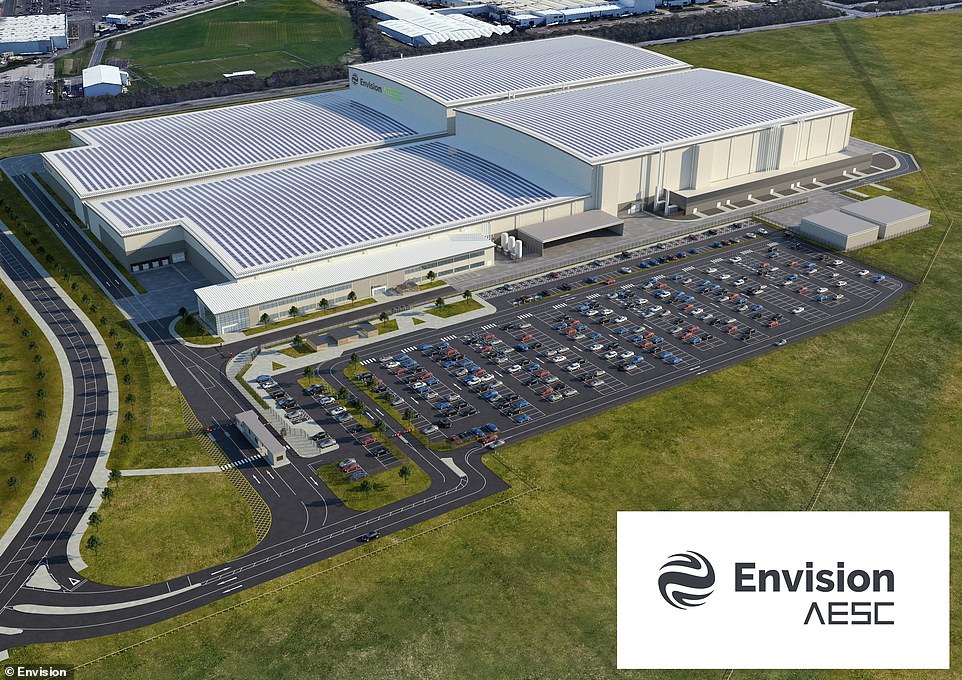 Such has been the rapid development, production and availability of electric models since 2011 that UK uptake has surged during the decade.

However, only one in 80 cars currently on our roads run on electricity, which is well behind the 2030 target of one in three by 2030, when the Government intends to ban the sales of new petrol and diesel passenger cars as part of its net-zero ambitions.

Speaking at the SMMT’s annual EV event, Mike Hawes, the trade body’s chief executive, said: ‘The UK automotive industry has set out its intent – to meet the challenge of net zero – and has backed that ambition with cash, investing massively during Britain’s first electric decade.

‘As we enter the second, the stakes are higher, with some of the world’s toughest regulation coming, regulation that will seek to determine the pace of change in a market constantly buffeted by headwinds.’ 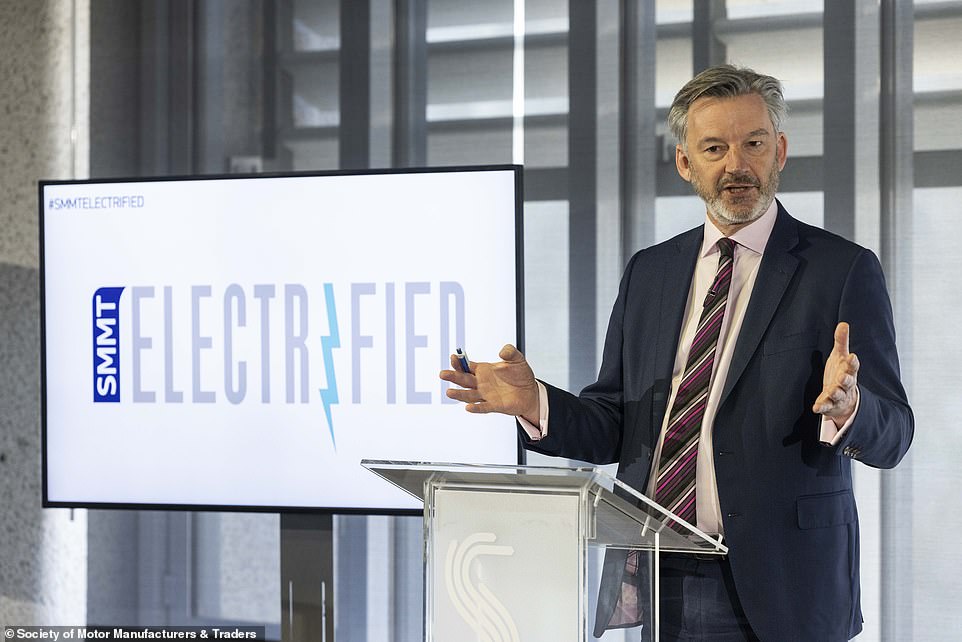 While sales of electric cars are accelerating at pace, the figures somewhat mask the level of consumer appetite for vehicles with plugs.

Which electric vehicles currently qualify for the Plug-in Car Grant? 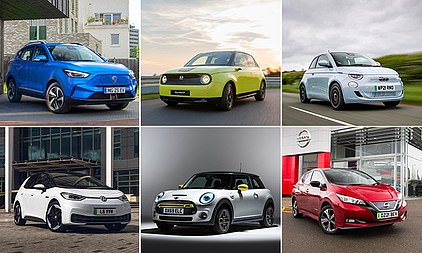 The Plug-in Car Grant was most recently slashed in December 2021.

Adjustments to the incentive mean only cars priced less than £32,000 (and that’s the list price, not the price you’ve paid after haggling a discount) are eligible to receive the grant.

Take a look at our in-depth report to find out which battery cars are currently eligible for the incentive – and which models have missed out since the December cuts.

The recent rise in demand for EVs has largely been driven by businesses and fleets, which have reaped the reward of generous fiscal incentives, such as low benefit-in-kind tax rates since 2020.

As a result, ‘private’ consumer purchases represented only around a third of plug-in car registrations in 2021.

And the trade body warns that Britain’s second electric decade could be derailed if there are major Government investments to make EV ownership more appealing.

One of the biggest sticking points for the SMMT is the winding up in recent months of purchase incentives for electric cars and the devices to charge them.

In the past 12 months, the Plug-in Car Grant has been slashed twice, cutting the available subsidy to just £1.500 towards the price of a brand new EV – and its only available to buyers of battery models with a value under £32,000.

EV purchase incentives in the UK now pale in comparison to those offered in other European countries. For example, electric car buyers in Germany have €9,000 (almost £7,500) slashed off the price of sub-£33,500 models – and €7,500 (approx £6,250) off the price of more expensive versions.

The UK Government’s Electric Vehicle Homecharge Scheme (EVHS) is also due to be dramatically rolled back at the end of this month, with available grants of up to £350 towards the installation of private chargepoints removed entirely.

Rising energy prices will also see the cost of charging an electric car at home rise by around £200 a year, completing a hat-trick of blows to potential first-time EV buyers.

The SMMT says this puts the UK EV adoption at risk of ‘falling behind some European markets which offer more attractive incentive packages’. 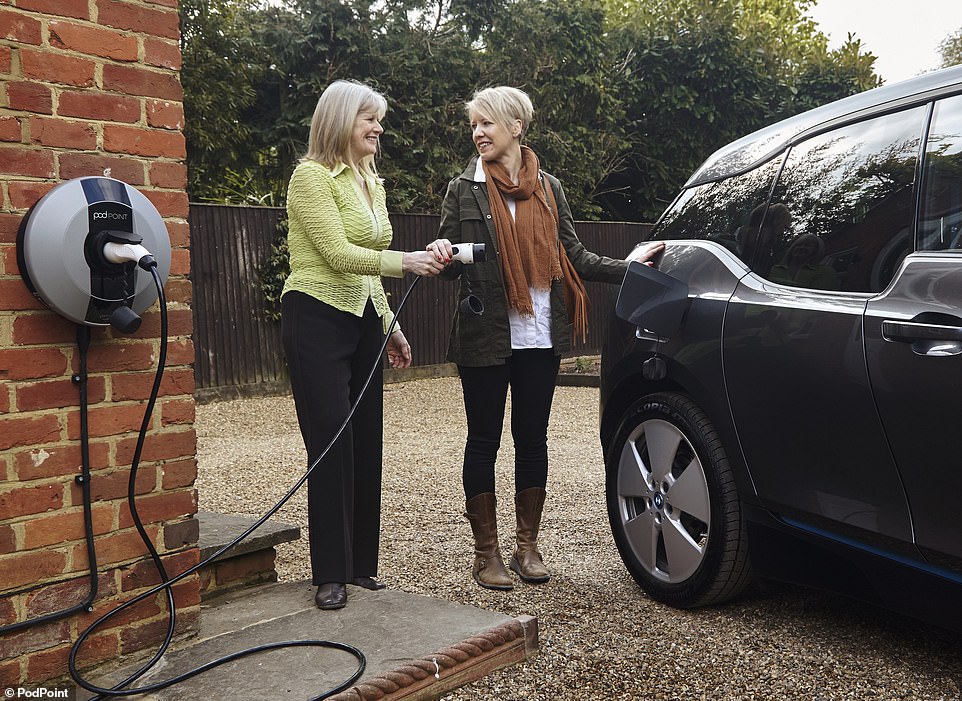 EV ownership costs set to rise by more than £2,000: The combination of higher energy prices and cuts to taxpayer-funded grants is set to make buying and running and electric car a lot more expensive than it was a year ago 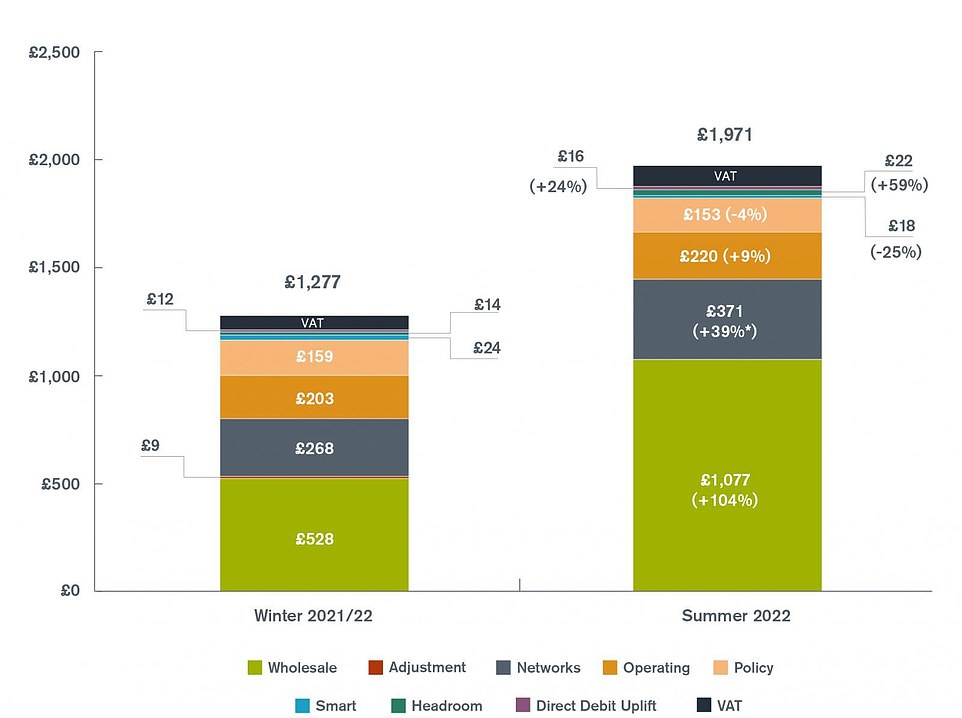 The energy price cap will rise in April by £693 from £1,277 to £1,971 per year for anyone on a default tariff paying via direct debit, Ofgem confirmed this month. This will ultimately have an impact on EV running costs for those who charge at home

It adds that growth in this market will also be dependent on charging infrastructure – and affordability of the public network.

BP will this week announce a fresh £1billion of backing to install new EV charge points in the UK, according to reports in the Financial Times.

The investment will bolster the number of rapid chargers in the oil company’s Chargemaster network, which currently stands at around 8,000 devices – most of them at fuel stations and motorway services.

The company previously said it will install 16,000 superfast UK charging points across the country by 2030.

Analysis shows that there are currently 32 electric cars to every public charger in the UK – a ratio that’s widening, having been 16 cars to each device in 2021.

The SMMT says chargepoint operators and government must ‘help plug the gap’ between EV uptake and infrastructure rollout – and called for the introduction of an independent regulator to ensure the network grows at pace.

On Friday, ministers are expected to provide new details of their charging infrastructure strategy in the hope they can deliver enough devices to meet the growing demand for electric cars and vans.

‘We need a holistic strategy with binding targets on chargepoint provision, attractive fiscal and purchase incentives, and a reliable, accessible and affordable user experience. 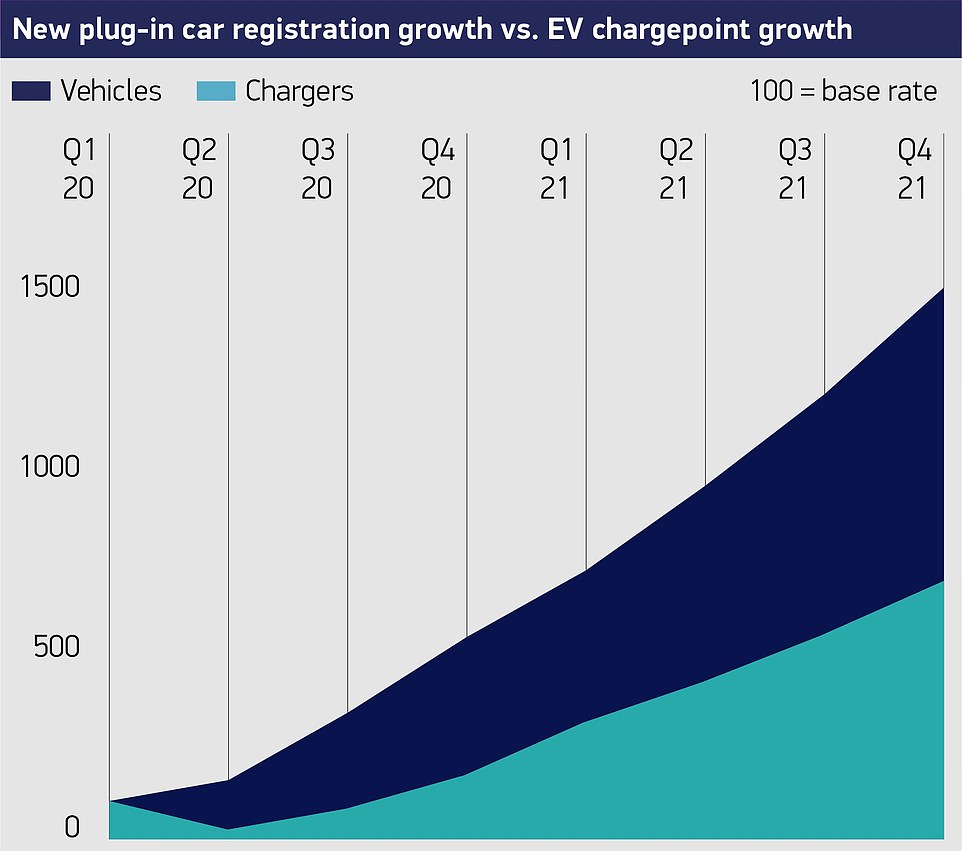 Analysis by This is Money earlier this year found the ratio of public standard chargers to electric vehicles has fallen well behind, with just one charger for every 25 pure electric vehicle registered in 2021