My ‘bargain’ £1,200 horse box was a rotten deal and fell apart after just one week, can I get any money back?

I paid £1,200 for a horse trailer in December after seeing it advertised on Facebook by a reputable company.

I was told it was in good condition but had a ‘soft patch’ – where the wood was not hard, but not rotten – at the front.

The seller reassured me the floor had been redone recently and was aluminium. As he worked for a firm that specialises in horse transport, I trusted I was being sold a safe vehicle and bought it. 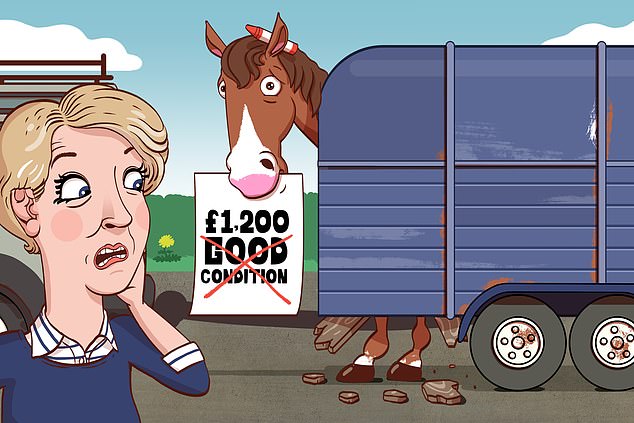 Knackered: A reader paid £1,200 for a horse trailer only to discover it was riddled with mould and for the ramp to fall off the very first time she used it

But I was wrong. On its first use, the ramp broke as soon as my horse stepped out. After three weeks, the panels were so rotten they almost fell out.

I messaged the seller asking if someone could fix it – I was happy to pay – but received a lukewarm response saying he would ‘have a think’.

Then nothing. In the meantime, I contacted a repair firm which discovered the extent of the rot. It quoted me £2,000 to fix it.

I dread to think what could have happened if the floor of this death-trap trailer had fallen through while you and your horse were on the road.

Both of your lives have been put at risk, but when I contacted the seller he refused to answer any of the allegations. Instead, he got back in touch with you.

He first offered £400, which I thought a joke, and then raised this to £500 — but only on the condition that no negative comments about the company appeared in the Press or on social media.

The seller even threatened legal action if any of your allegations were published. I was shocked by this aggressive gagging order, as was a lawyer I consulted.

He finally offered you a full refund and promised to take back the unsafe trailer. This should have been done in the first place, without my intervention and the ugly legal threats.

I appreciate you just want your money back and to put this behind you, but I have advised you to report this seller to Trading Standards, as I have now done.

Remember, if you purchase goods from sites such as Facebook Marketplace, it really is buyer beware — it is up to you to inspect items and there is no recourse if things go wrong. This trailer was cheap — if something looks too good to be true, it probably is.

When buying from a business you have stronger protection. Online purchases can be returned within 14 days, no questions asked, and faulty goods must be repaired, replaced or refunded.

My wife and I were each fined £400 for late filing of a tax return relating to a property we sold in August 2020.

The rules had changed on capital gains, so the tax had to be paid within 30 days of a residential property sale.

We paid the fine but appealed, because nobody knew of the change and we argued that it had not been publicised.

HMRC upheld our appeal. We asked for the refunds to be paid into our bank accounts, but have been told it will not be replying until July.

How ridiculous. I passed this to HMRC and it immediately phoned to promise your refunds would be with you in three to five days.

A spokesman says: ‘We have contacted Mr C and issued the refund due. We apologise and thank him for bearing with us.’