N64 games and consoles: What are they worth now?


Last summer, a Nintendo 64 game sold for $1.56million at a US auction. That’s right, a single game in mint condition went for more than £1million.

For some, that might have prompted a dive into the loft on the hunt for retro games they may have clung onto, for others, despair that they may have parted with old consoles or lost them during home moves.

As 1970s, 80s and 90s children become older, it is likely they have more disposable money to spend – and part of this cash is diverted onto items that help them relive their youth, much of which becomes scarcer as the years tick on.

In the first of our new regular retro revival series, where we take a look at items that have grown valuable in recent years including antech – that is, antique tech – we turn our attention to the popular Nintendo console and software. 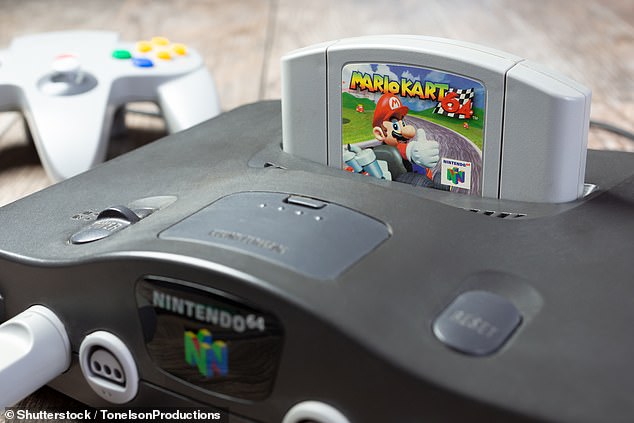 Nineties gamers may be surprised to discover that their old N64 games could be worth hundreds of pounds.

Paper Mario? It’s worth a mint…

Whether it was four player deathmatches on GoldenEye, racing as Mario, Luigi or Donkey Kong against friends on Mario Kart, or engaging in the heart pounding air-to-ground battles in Star Wars Rogue: Squadron, late 90s Nintendo games offered many a form of escapism beyond anything else.

But other than nostalgia, 90s gamers may be surprised to discover that their old N64 games could be worth hundreds of pounds.

Online sites such as CeX and eBay provide perfect platforms for N64 enthusiasts, past and present, to buy and sell – and also gauge how much certain games and hardware is selling for.

Looking at N64 games advertised on CeX – a retailer that specialises in second hand, and can be found dotted in high streets across the country – there are games selling from £1, all the way up to £1,250.

Condition, scarcity and fashion greatly impact the price of retro gaming and it is clear that the most well known and popular games are not necessarily the most expensive either.

This is likely to be because of supply and demand.

For example, take Conker’s Bad Fur Day. This was a game released in 2001 and was for a mature audience, rather than the family friendly titles the N64 had become known for.

It wasn’t a commercial success thanks to that and the fact it was released towards the end of the N64’s shelf life.

Another example is Paper Mario. Again, it was released near the end of N64’s lifespan and mint boxed versions are sold for £350 at Cex, boxed for £295 and unboxed for £180.

Samantha Curtis, marketing executive at CeX (UK) says: ‘Values will change over time as games and consoles fall in and out of fashion.

‘They can go down as well as up, and a new release of a remastered game may or may not increase the value of your retro original.’

The most popular N64 games in terms of sales numbers are unboxed N64 cartridges, according to CeX, more often bought to play and enjoy than purely collect.

Goldeneye, Super Mario 64, Mario Kart, Legend of Zelda: Ocarina of Time, and Donkey Kong Racing are the five most popular games, according to its data.

These games are arguably the best known of all the N64 games, with many buying to relive their childhoods from the 1990s.

Prices for all these N64 games varies by condition.

Collectors typically want mint condition, with original boxing and inserts – these will usually be advertised on sites like ebay and CeX and listed under ‘mint.’

However, gamers who are buying to simply play may well be happy with the unboxed versions for their collections (listed on sites as unboxed), although there are also limited and special conditions to take into consideration too. 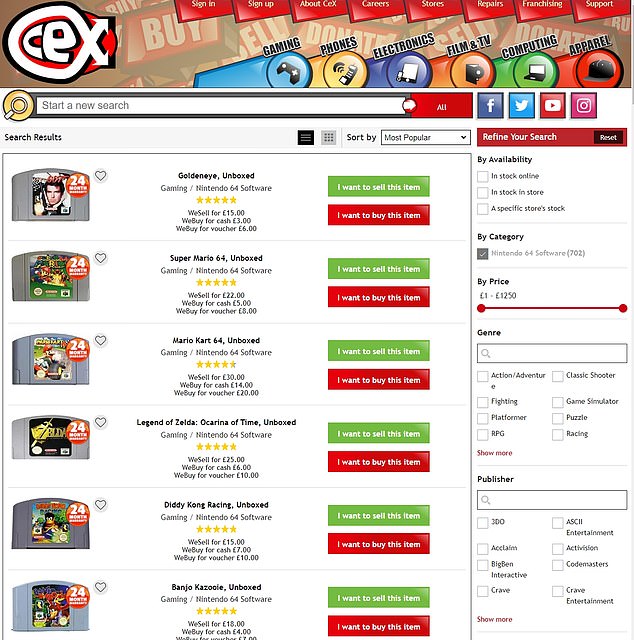 Buyer and seller prices on CeX for unboxed versions of the most popular games. 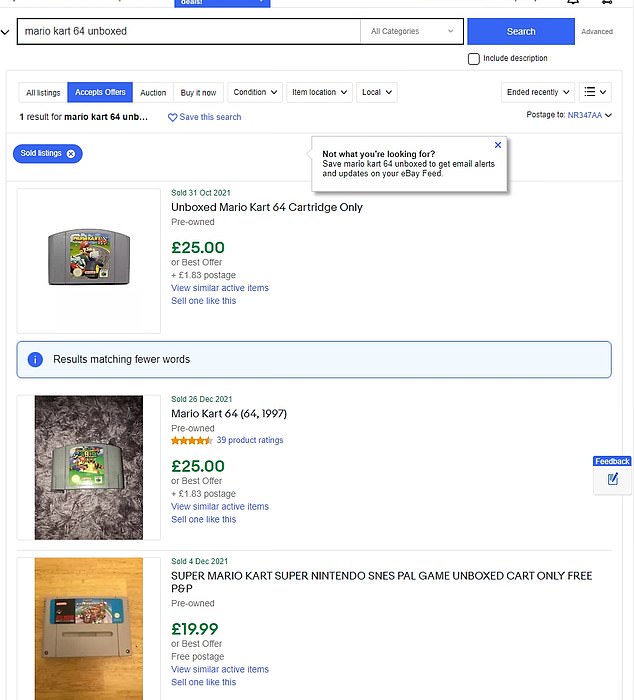 ebay sold prices for those looking to offload an unboxed Mario Kart 64 cartridge.

Sellers turning to eBay could expect to secure £25 for an unboxed version of the game.

However, those selling a fully boxed mint version of the game could expect to sell for £58 on CeX, whilst for Mario Kart, a mint boxed version could expect to fetch closer to £100 on eBay judging by sold prices.

The prices are slowly ticking higher as the years pass, thanks to scarcity, and a surge of interest

Similar to games, Special edition N64 consoles will also sell for more if they are kept with all the original packaging, components, accessories and inserts, according to CeX.

Therefore it could be worth looking after your old games and consoles, as if they’re kept with all the original packaging and components it’s likely you’ll be rewarded for your efforts.

When it comes to identifying the most expensive N64 games, scarcity appears to be more sacred than anything else.

‘It’s all about scarcity, says Curtis, ‘scarcity in terms of the number made – how many cartridges were manufactured – but also in terms of how many are still in mint condition these days.’

Currently across CeX’s 387 UK stores and online site, the most expensive games are all in mint condition with the rare Australian releases demanding the highest sums.

The most expensive game to be found across the site and its 387 UK stores is the Australian release of Snowboard Kids 2 which is available for £1,250 in mint condition.

This is closely followed by another rare Austrian release, Starcraft 64, which fetches £1,100 in mint condition, according to CeX. 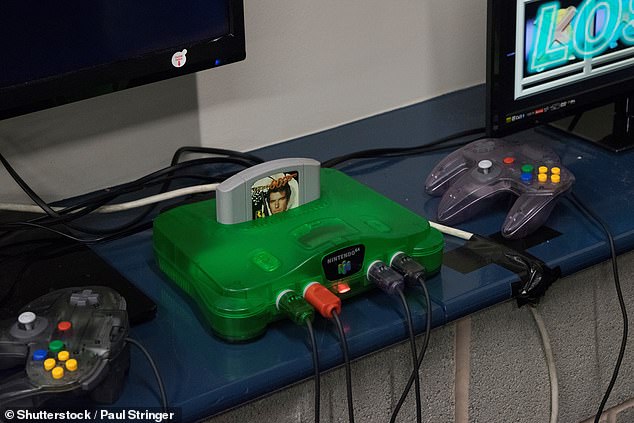 Fancy reliving that four player deathmatches? GoldenEye is one of the most popular N64 games in terms of sales numbers, according to CeX

It’s worth noting that whilst US copies are easy and cheap to obtain, the scarcity of the Snowboard Kids 2 in Europe means you can expect to pay such high prices.

Unlike the US version, the PAL Australian release (30 April 1999) is very scarce and highly sought after, with little evidence of European stores selling it.

The PAL was a TV publication area that covered most of Asia, Africa, Europe, South America and Australasia, although most countries have stopped using PAl

Condition also really comes into play particularly with retro N64 games as they would come packaged in a cardboard box.

Games complete in boxed mint condition with all the cardboard inserts and manuals will typically fetch more than an unboxed version of the same game for this reason.

‘Scarcity really is a key factor in the value of retro games,’ reiterates Curtis, but this may not always mean how hard it was to procure, but also can refer to factors such as the condition and even the edition of a particular game.’

A perfect example of these factors coming together took place in July last year when an unopened copy of Nintendo’s Super Mario 64 was sold for $1.56million in a Texas auction.

This was a first print in mint condition of the wildly popular game.

‘With over 12 million copies of this game sold, it’s still pretty readily available, but finding first print copies that have never been played or opened is extremely rare, these along with other factors increase the value of retro games,’ adds Curtis.

Along with games, other kit sells well too. For example coloured controllers and special edition consoles.

A Pikachu Blue, Boxed console sells for £335 at Cex – more than double just a regular boxed version. A regular grey controller sells for £20, but if you’ve got a transparent coloured one in watermelon red or jungle green, it’s worth more than double that.

Expansion and rumble paks are also worth a few quid – so it could be worth pricing everything individually if you do have an old N64 knocking around, to see if you can maximise the money you can get for it all.

We’re entering an era now of 30 and 40-somethings pining after their youth and having disposable income to spend on their hobbies/investments, writes Never Go Broke author Jesse McClure – and that is pumping up prices.

Gaming is one of these boom areas. When it comes to buying and selling, it’s all about having niche areas that you’re interested in. I think of it like a resale tree with branches.

So you’re interested in gaming. You’re then branching into Nintendo, and then specifically N64. As you go along, you’ll spot games and kit in charity shops, boot sales, Facebook Marketplace, eBay and will know rough prices for much of it as time goes. Resale muscle memory.

Can you buy X game for X price knowing that you can make X profit on it? You can take that resale philosophy into any genre you’re interested in. You also have instant access to the information at your fingertips with a simple search on your phone when you’re out and about.

You’ll be surprised how many games – not just N64 – that you’ll spot in the wild that haven’t been priced correctly.

One of the keys to resale is getting into a genre you’re interested in – that way, if you make a mistake, at least you’re left with an item you like. 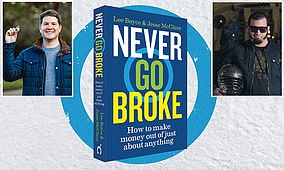 When it comes to video games, scarcity is key. But so is condition. How many of us received consoles when we were younger, ripped open the boxes and games without much care or thought?

It’s telling that N64 consoles and games in mint condition are worth far more.

Ideally, you’d buy two copies of a game, keep one in its wrapping and the other to just bash around and enjoy, but hindsight is wonderful in that regard.

But it’s also true today. Take the Nintendo Switch for example. It’s a popular console, and many people now choose to just download games. But I still like physical copies. These Switch games are tiny. How many will go missing in the coming decades? Plenty. So, like the N64, games in good condition become scarce.

If you do have items in pristine condition, it can pay huge rewards to get them graded.

These are sold prices, not just what some chancer has listed them for.

Odd variations of games and consoles can also add huge value – such as the Pikachu version mentioned above.

For example, a quick scan on eBay shows an N64 copy of Mario Party 3 in a bidding war past £150 – because it is a ‘not for resale demo’ edition. Collectors love this kind of rare item.

You can find out more about how to buy and sell items for profits in my book Never Go Broke, co-authored with This is Money deputy editor Lee Boyce.