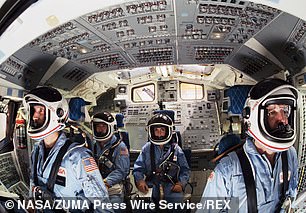 A former Nasa expert saw shares of his green energy business take off as it floated on the AIM junior stock exchange yesterday.

Dr Nigel Williamson was called on in 1986 to solve the mystery of the Challenger shuttle explosion.

The hydrogen and oxygen expert discovered the reason was faulty seals on the side of the rocket. He later discovered a clean and low-energy way to separate water from hydrogen, which can be used in fuel cells to create electricity.

In 2012 he founded CPH2, which sells the machines to companies switching to clean energy, so they can make so-called green hydrogen out of water. Yesterday his company was worth £162m after shares rocketed from their 45p offer price to 61p, a 35pc jump. It meant Williamson’s 9.2pc stake was worth £15m.