A metal detectorist who went searching for hidden treasure to keep his children entertained discovered a coin that sold for a record-breaking £648,000 last month. While such findings are rare, anyone can participate in the fascinating and often lucrative world of coin collecting – and make money without even having to dig in a field.

He says: ‘The market for coin collectables has exploded over the past couple of years – with the value of the most sought-after rarities rising by as much as 50 per cent. The price achieved for the sale of this incredibly rare 1257 coin discovered by Michael reveals how buoyant the market now is.’ 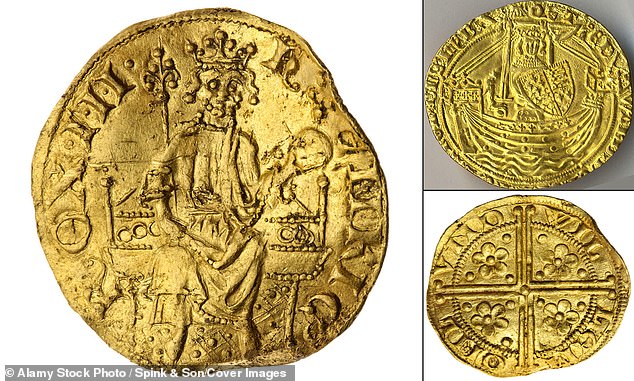 While some may want to do a Leigh-Mallory and chance their luck on what riches a metal detector may uncover, others will prefer a more sedate approach to collecting coins. They will want to make profits as a numismatist, the industry term for a coin collector. Here’s what to look for – and where you might find it.

As fascinating as getting involved in collecting coins should be, it can also seem intimidating when starting out. The British Numismatic Society is the best place to begin and offers a wealth of information and support for those dipping their toe into this fascinating hobby – with details of local groups who can share details of their collections and even trade coins with you.

New members pay just £15 for the first two years. In return you enjoy access to a wide range of articles about coins – covering details on pieces from the Iron Age, through to Roman, Anglo-Saxon, medieval and beyond. You also get a hard copy of the society’s annual journal which reviews coin sales over the past year.

A great place to start is with Roman coins, collecting examples with the heads of different emperors with bronze or silver coins typically costing from £20 each. The British Numismatic Society has a coin gallery showing coin images, while magazines such as Coin Collector and Coin News also help whet the appetite and provide interesting articles on sales and unusual finds.

You might like to visit a coin fair, where you can rub shoulders and chat with experts about their interest without parting with any money. Details can be found at coinfares.co.uk. The Midland Coin Fair at the National Motorcycle Museum in Solihull, takes place a week today.

Following the cryptocurrency craze, a growing number of people are waking up to coin collecting as a welcome escape from the digital world. Edmund says: ‘Many of those entering the coin collecting market are investors who think that if there is money to be made in virtual money, then why not try the real thing. Others are attracted because they do not trust cryptocurrencies – or perhaps they have had their fingers burned by them.’

He adds: ‘There is also an increased globalisation in coin collecting – with the Chinese and Japanese in particular taking a keen interest and pushing up prices of high value rarities.’

An Una and the Lion five-pound gold coin minted in 1839 to celebrate the newly crowned Queen Victoria – who became queen two years earlier at the age of 18 – sold for a record £620,700 two years ago. A decade ago it might have changed hands for only £30,000.

The character Una comes from a poem The Faerie Queene – and depicts Queen Victoria leading a lion on the tale side of the coin. Only 400 of these valuable coins were ever produced.

Another coin with global appeal is the 1847 Gothic crown – limited to just 8,000 pieces. This silver piece is valued for its medieval-style image of Queen Victoria and typically changes hands for up to £20,000. But a top quality ‘first strike’ Gothic sold for £97,000 last month.

There have been price hikes right across the board – starting with coins from ancient and medieval times through to more modern ones – Edmund believes those who are seeking value for money should take a close look at ancient pieces. The coin auctioneer points to examples such as a 4th Century BC silver drachm with an image of Alexander the Great on the head when he was the king of Macedonia. This can now be bought from as little as £50 – up to £500 if it is in great condition. 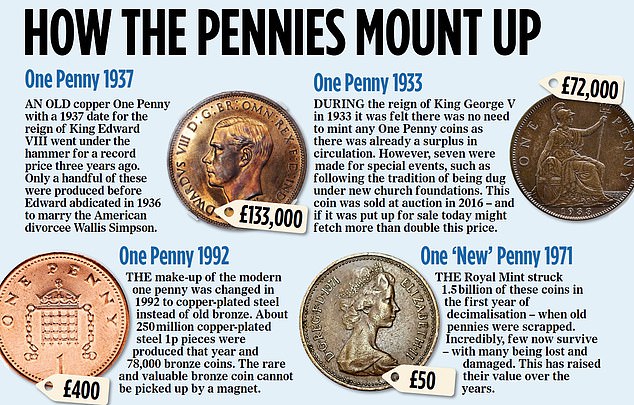 The King Henry III gold coin that sold for a record price in January this year was unearthed on Devon farmland in September 2021.

It is one of only eight known to exist and was one of the first gold coins minted in medieval times. There are few survivors because most were melted down for their gold as this was more valuable than their face value of four shillings (20p). Andrew Shirley is editor of the wealth report for estate agent Knight Frank, which tracks the price of alternative investments such as coins in a luxury index. For collectable coins specifically, Knight Frank says prices have risen by 9 per cent over the past 12 months and 72 per cent over the past ten years. The data is based on market valuations of more than 1,000 top-quality coins.

Shirley says: ‘Such buried treasure that Leigh-Mallory discovered has a fascinating hidden story. The gold coin may have changed hands for many reasons. Could it have been part of a dowry, and what happened to those who buried it?’ He adds: ‘Interest in coins is rising partly because of their tangible appeal in a remote digital age. With an ancient coin you can touch a piece held by others centuries ago.’

Another medieval coin that captures the imagination of collectors is the gold noble, which started to be struck during the reign of King Edward III in the 14th Century.

Those considering investing £200 in a metal detector should be aware that the chances of a life-changing discovery are rare. There are also strict treasure seeking rules. Under the 1996 Treasure Act for England and Wales, any hoard that is more than 300 years old and contains at least ten per cent gold or silver is deemed as treasure and belongs to the Crown. It must be reported to a coroner within 14 days of being unearthed – otherwise you risk three months in jail or a £5,000 fine.

Treasure is independently valued and payment usually split equally between a finder and landowner where the coins are found.

harrry
Previous article
Amazon named as possible Peloton buyer in a suspiciously well-timed rumor
Next article
10 Best JRPGs Of All Time, According To Reddit