If you’re in the market for a high-performance pick-up, you likely have a Ford Ranger Raptor at the top of your shopping list.

A new model will arrive later this year, boasting more power than before and a range of upgrades to make it the ultimate off-road truck you can buy in a British showroom. 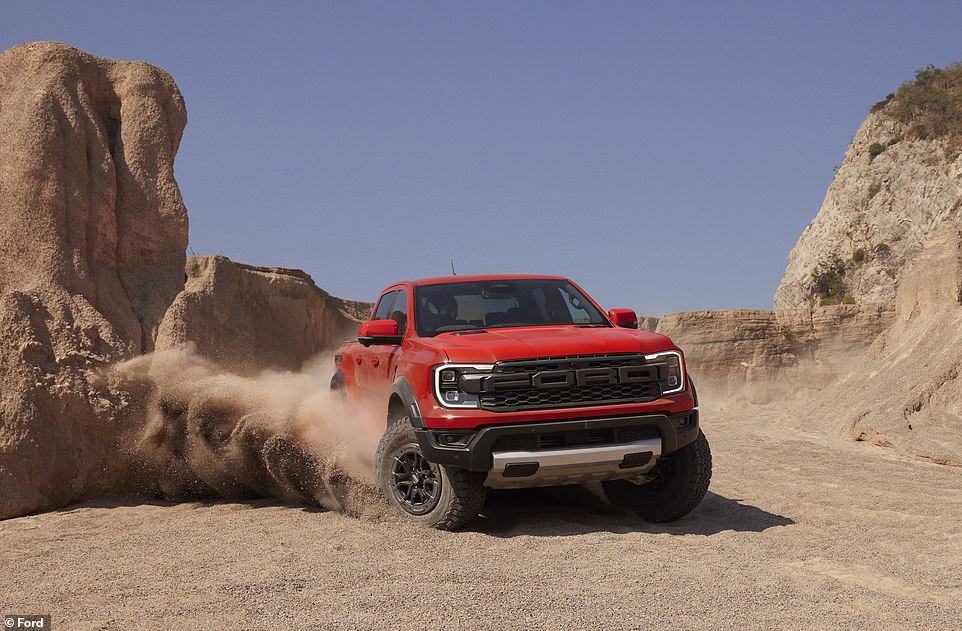 Trucking fast! This is the new Ford Ranger Raptor pick-up, which is due to arrive in Britain later this year. We detail the ten big things you need to know about the truck ahead of its arrival

1. Ford has ditched diesel in favour of a twin-turbo V6 petrol

The biggest news for the latest Ranger Raptor is the powerplant under the bonnet.

The motor has been tuned by Ford Performance – the specialist racing department of the US car firm – to get the most out of it.

This results in 284bhp of power, up from the outgoing diesel’s 210bhp.

But with hulking vehicles like this, pulling power is paramount, which is why manufacturers tend to choose characteristically torquier oil burners. That said, the new petrol offers an impressive 362 foot pound, which is almost a match for the diesel’s 369lb ft. 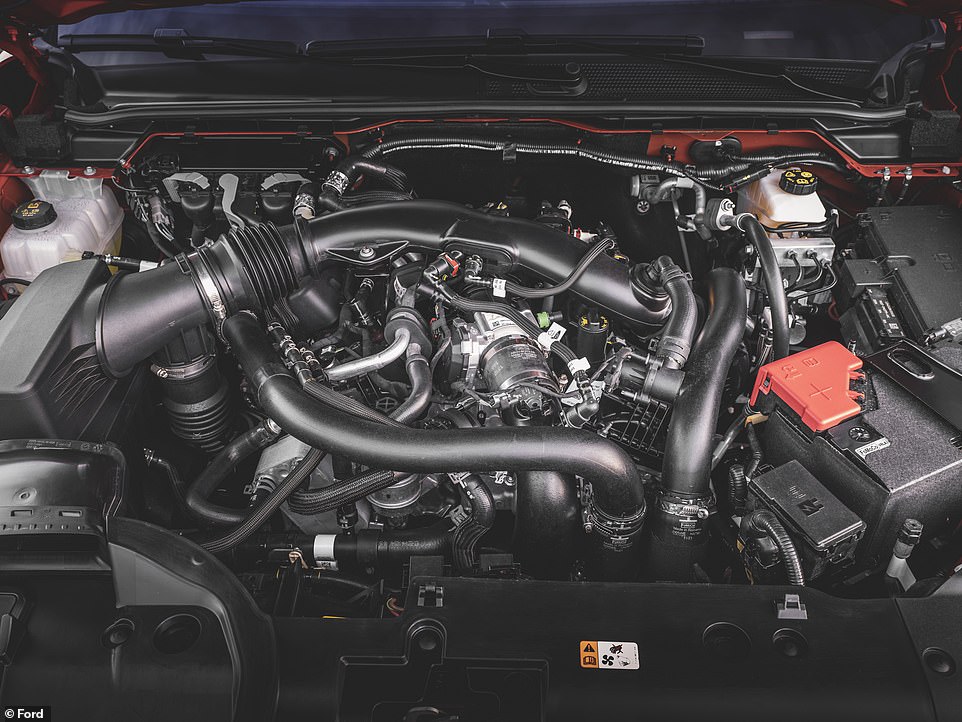 Ford has ditched diesel power from its British-spec Raptor, adding a new 3.0-litre V6 petrol that also has the same amount of pulling power as the oil burner it replaces 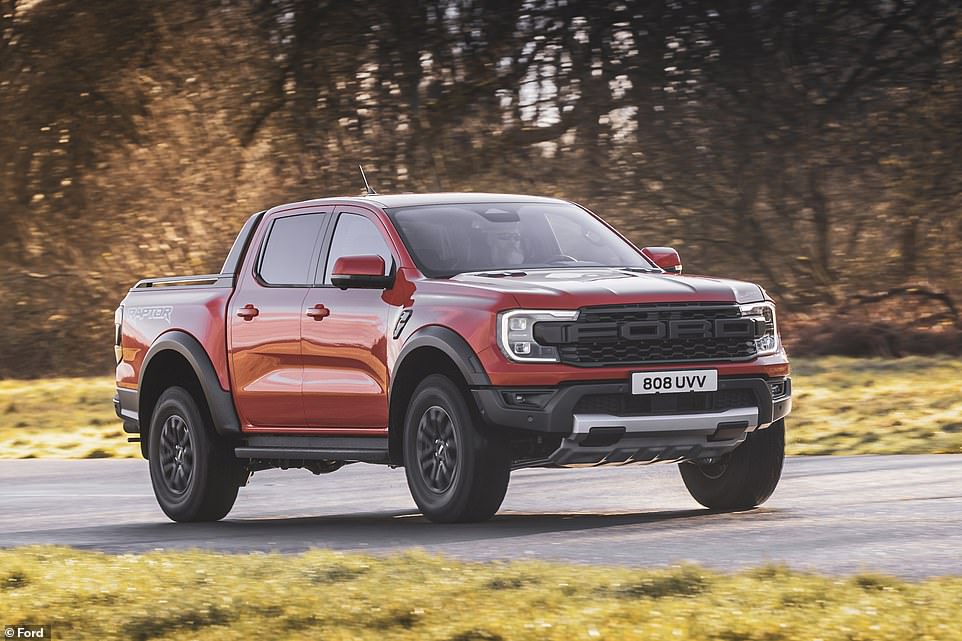 While no performance figures have been revealed just yet, it is widely expected that this will be the quickest-accelerating Ranger Raptor yet

Ford has yet to state the performance figures – such as 0-to-62mph sprint times or top speed – but it’s nailed on to be the fastest Ranger Raptor customers have been able to buy in Britain.

‘The 3.0-litre engine brings a different dynamic to the Ranger Raptor that will satisfy even the most hardcore performance enthusiast,’ explained Dave Burn, Ford Performance chief programme engineer.

‘The acceleration and raw performance of the new powertrain leave you grinning from ear-to-ear,’ he promises. 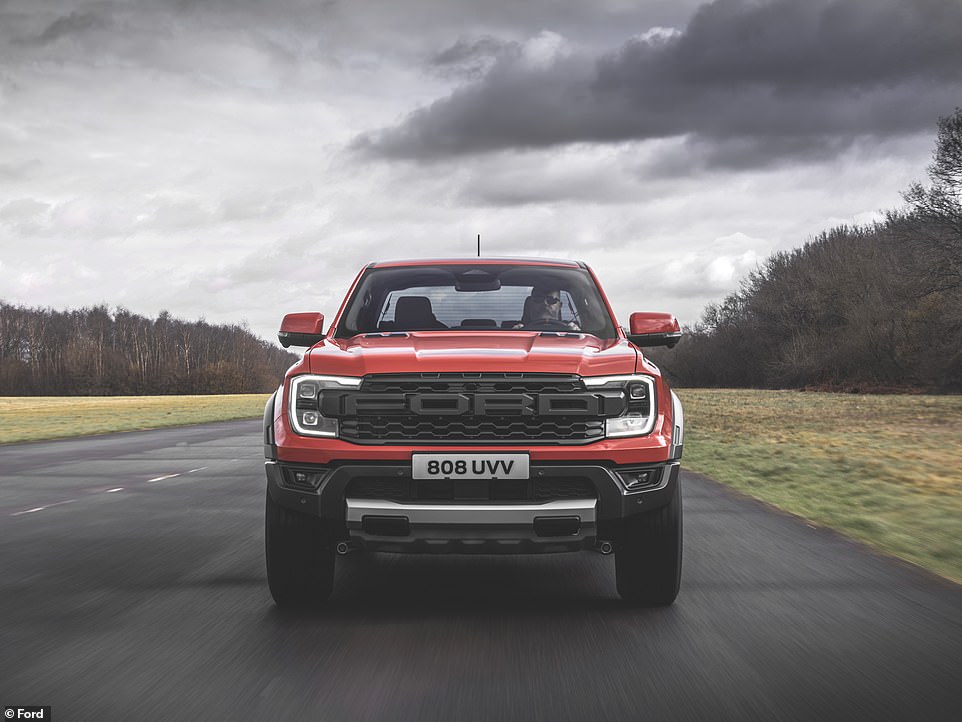 While power has been upped from 210bhp to 284bhp, the Ranger Raptor sold across Europe will be more than 100bhp less potent than the versions sold in the US and Australia. And it’s all because of our stricter vehicle emission rules

While the new Ranger Raptor will likely be the most powerful Britons have ever been able to buy from a blue-oval dealer, the versions sold in America and Australia will boast over 100bhp more than the model we’re getting.

US-spec examples will have 387bhp and 430lb ft pulling power, despite mechanically being like-for-like for our European-tweaked trucks.

Ford says the 27 per cent drop in potency was required in order for the Ranger Raptor to comply with EU vehicle emissions. 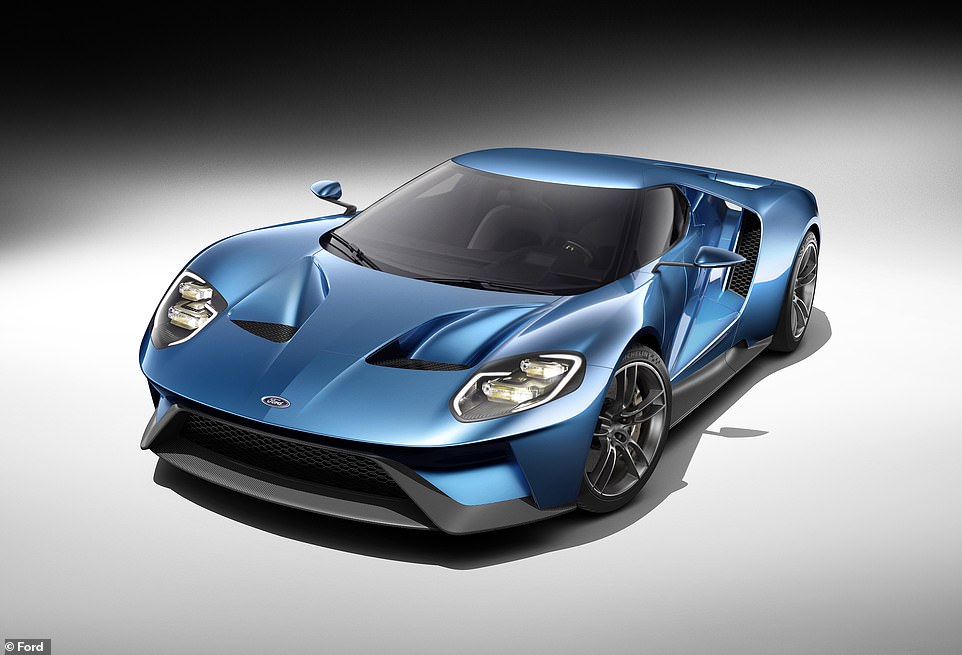 One feature that cements the high-performance nature of the Ranger Raptor is its anti-lag system, which until now has only been used by Ford on its £320,000 GT supercar (pictured) 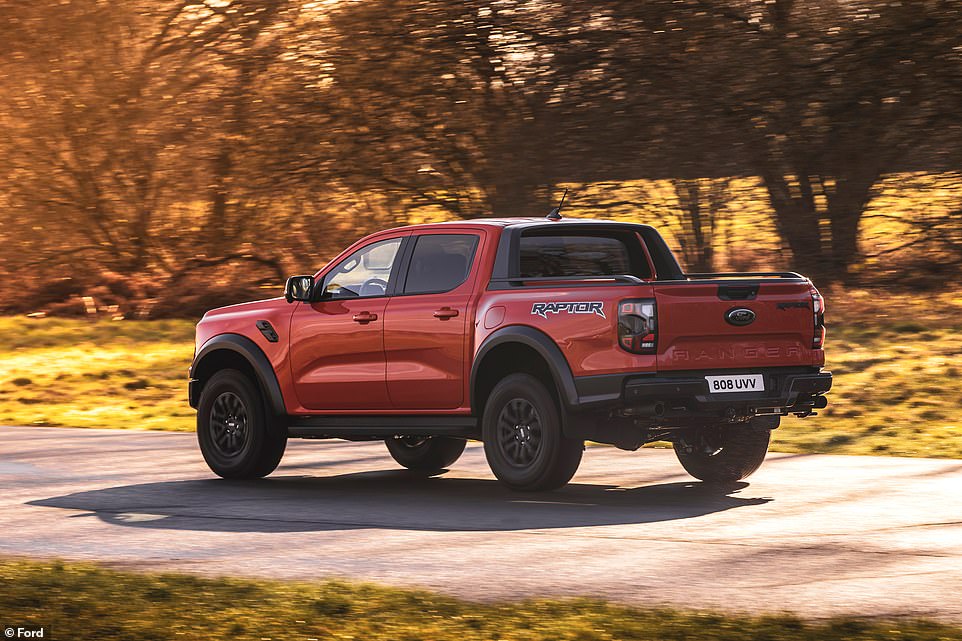 The system keeps the turbochargers spinning for up to three seconds after the driver backs off the throttle, allowing for faster resumption of acceleration out of corners

3. It features an ‘anti-lag’ system borrowed from the Ford GT supercar

One feature that cements the high-performance nature of the Ranger Raptor is its anti-lag system, which until now has only been used by Ford on its GT supercar and Focus ST hot hatch.

The system is design to provide rapid delivery of boost on immediate demand. It achieves this by keeping the turbochargers spinning for up to three seconds after the driver backs off the throttle, allowing for faster resumption of acceleration out of corners or through the gears when the driver steps back on the accelerator.

The engine is also programmed with an individual turbocharging boost profile for each of the advanced 10-speed automatic transmission’s gears, for added performance.

The transmission has been carried over from the outgoing Raptor, which is linked to an intelligent four-wheel drive system. It can can send power only to the rear wheels to save fuel when cruising on the road – or it can optimise grip levels on non-tarmac-terrains with front and rear locking differentials and seven selectable drive modes. 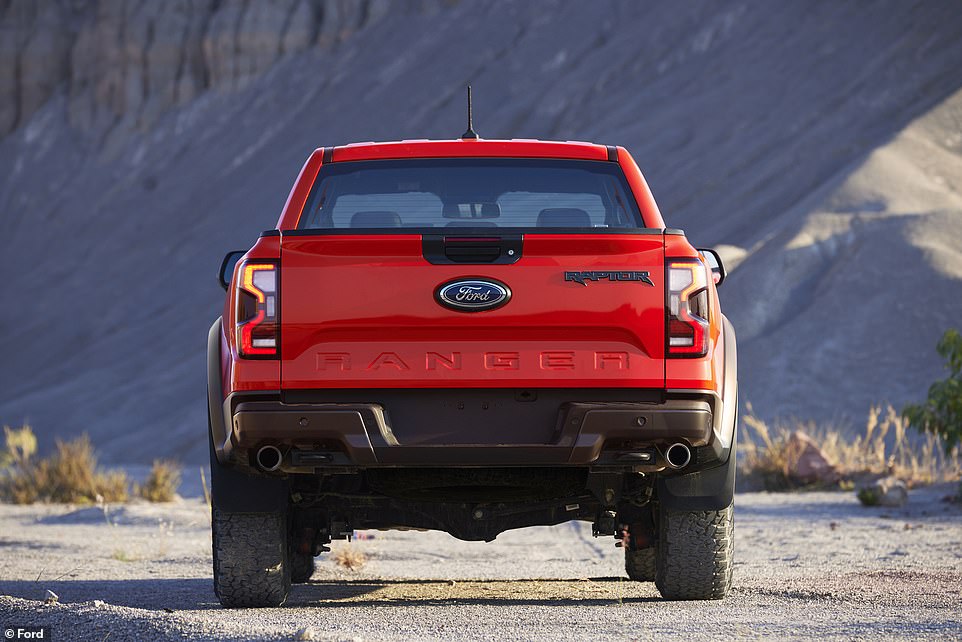 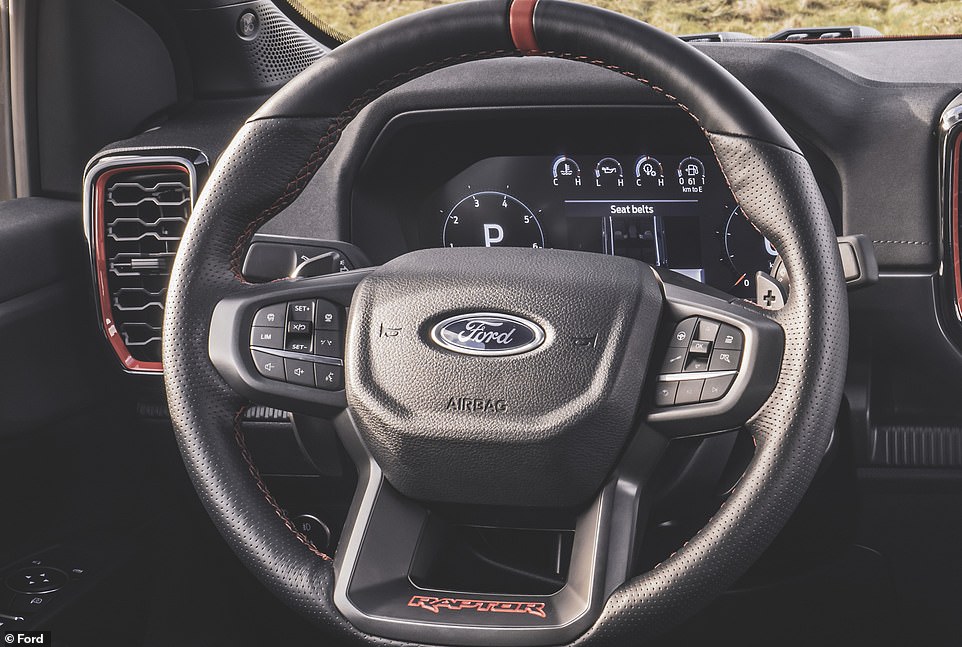 The Baja setting – which can be selected on the steering wheel control buttons – is the one most likely to get you an ASBO. It’s named after the iconic Baja Bug VW Beetles used for sand-dune racing and makes the exhaust as loud as a straight-through system used on the performance buggies

4. It has adaptable noise modes so you can appease people on your street – or get added to the top of the neighbourhood watch hate list

Complementing the new powertrain in the Ranger Raptor is an electronically‑controlled active exhaust system, which can either nullify or amplify the engine note via four selectable modes.

Drivers can choose their preferred decibel level by pressing a button on the steering wheel, or by selecting a drive mode.

The ‘Quiet’ setting is the one that will keep you in the good books with your neighbours, as it prioritises quietness over performance and is the mode you’ll want to use if you get on well with the family next door.

A ‘Normal’ setting is for day-to-day use that won’t get you snarling looks from pedestrians as you pass, though upping to ‘Sport’ mode will definitely let a cyclist know you’re in close proximity.

The final setting is the one most likely to get you an ASBO. It’s called ‘Baja’ – taking influence from the iconic Baja Bug VW Beetles used for sand-dune racing.

Choosing Baja turns the volume up to eleven, with the exhaust behaving like a straight-through system with ear-splitting tones. Ford says this mode is ‘intended for off-road use only’. If this instruction is ignored, expect your mug shot to be pinned on your local neighbourhood watch notice board. 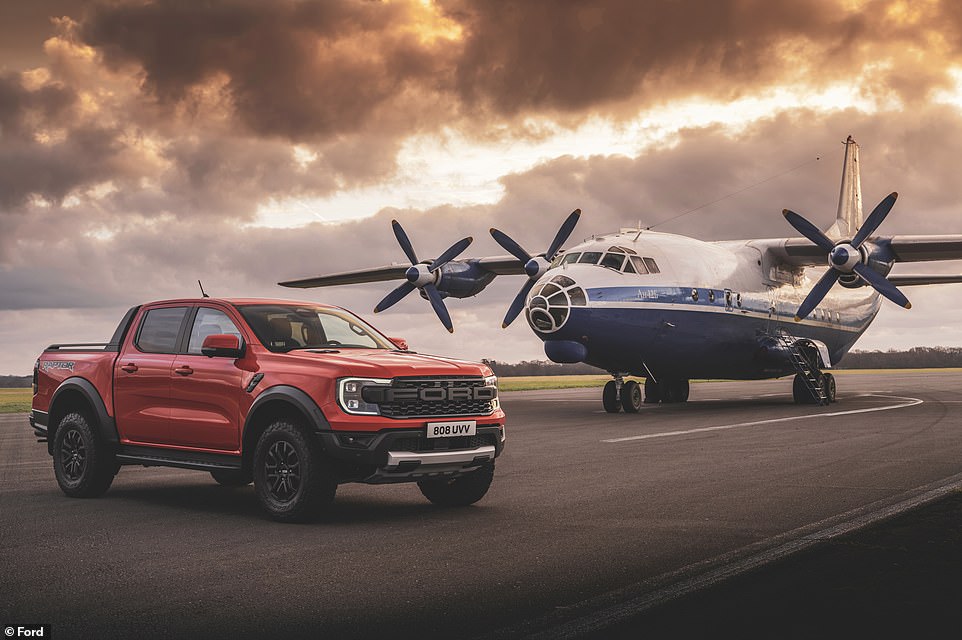 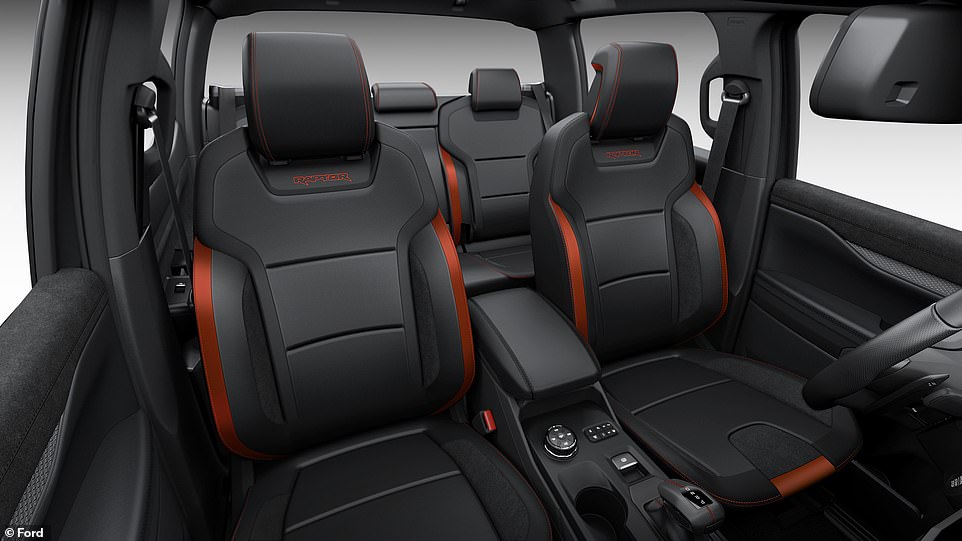 5. It can jump out of a moving plane

Ford says the new seats fitted to the front and rear of the Ranger Raptor are ‘jet fighter-inspired’ to ‘increase comfort’ and ‘offer more support during high-speed cornering’. They’re also there to keep you in place if you drive your pick-up out the back of a cargo plane.

That’s what the extreme unveiling video of the Ford truck shows, with the vehicle driving out of the loading bay before skidding around the runway and airfield.

See the incredible film below… 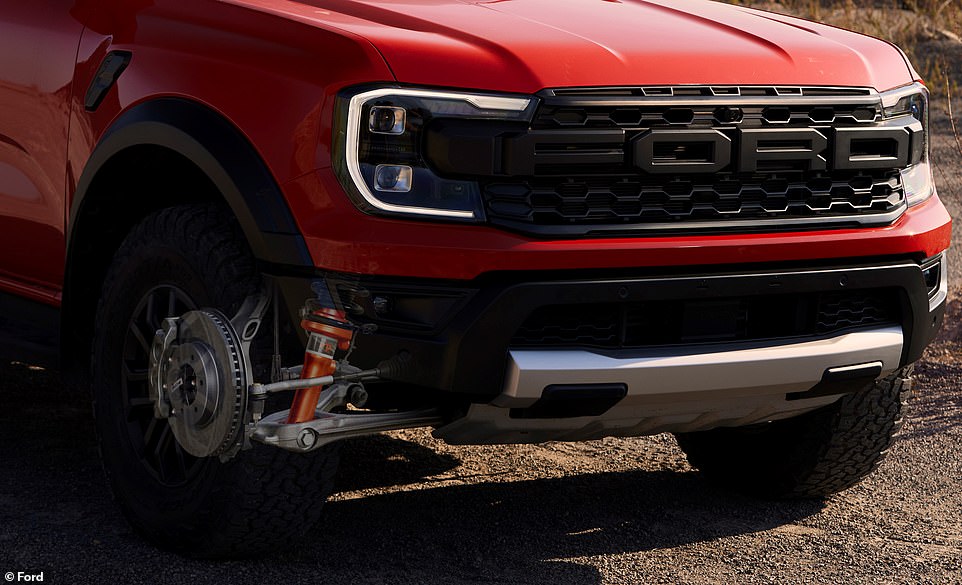 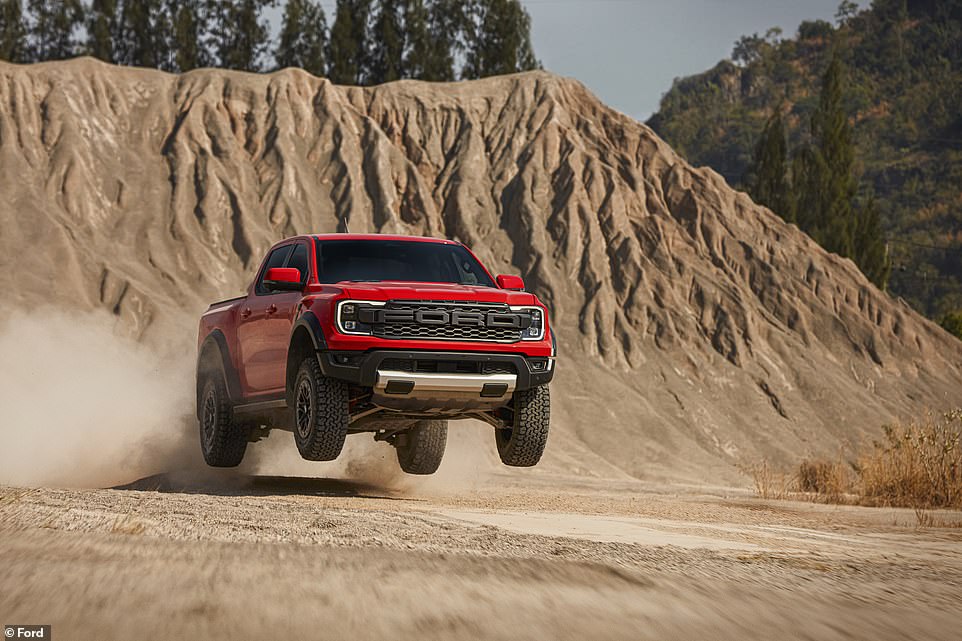 To provide protection against severe bottom-outs if you land a big jump, the chassis has been equipped with ‘race-proven’ components that maximum damping force in the last 25 per cent of shock travel

6. It has plenty of upgrades on the standard Ranger, with new suspension and reinforcements to go off-roading at pace

The Ranger is Britain’s favourite pick-up truck, amassing over 17,000 sales in 2021 alone. But the Raptor is something very different. Ford says this will be a no-holds-barred off-roader, and it’s for this reason that the chassis has had a number of significant upgrades so it can tackle any terrain.

The Ford Performance team has added additional mounts and reinforcements to the C-pillar, load box and spare wheel, as well as unique frames for the jounce bumper, shock tower and rear shock bracket. This means a big jolt from a hard landing or crashing over a big drop won’t cause sections to crumple or things to fall off.

These shock absorbers are the most sophisticated ever fitted to Ranger Raptor, says Ford, and are filled with Teflon‑infused oil that reduces friction by around 50 per cent compared to those on the outgoing vehicle.

To provide protection against severe bottom-outs if you do come crashing down from a big jump, the chassis has been equipped with ‘race-proven’ components that maximum damping force in the last 25 per cent of shock travel.

Similarly, the system can stiffen the rear dampers to prevent the truck from squatting on its rear haunches under hard acceleration, which should improve stability. 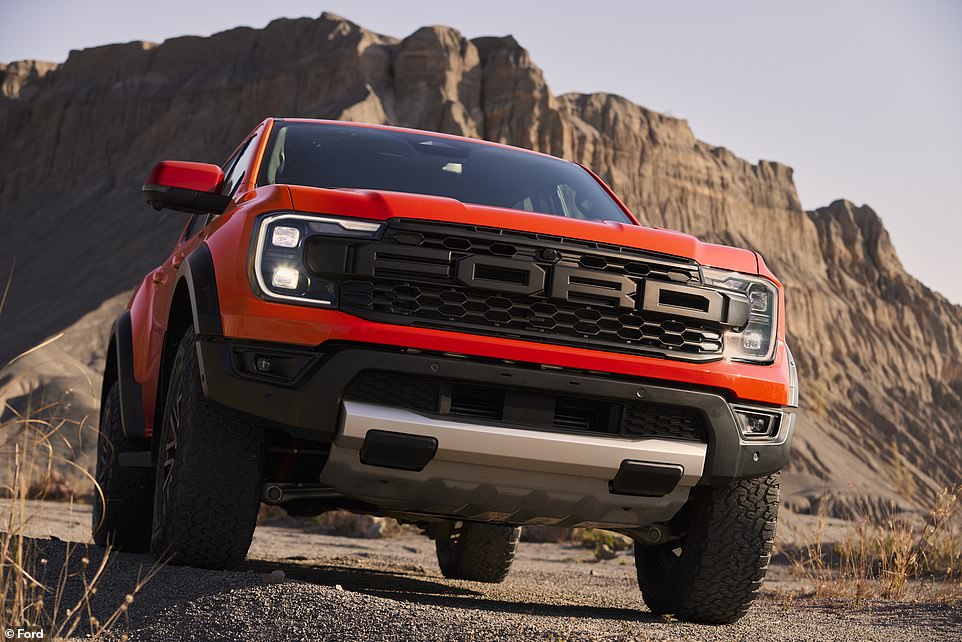 This front bash plate is almost double the size of the standard Ranger truck’s unit and is made from 2.3mm-thick high-strength steel

7. The undercarriage is well protected

Ranger Raptor’s ability to tackle the roughest terrain a Briton could throw at it is further enhanced with some serious underbody protection.

The front bash plate is almost double the size of the standard Ranger truck’s unit and is made from 2.3mm-thick high-strength steel. This plate, combined with the engine undershield and transfer case shield, is designed to protect key components such as the radiator, steering system, front crossmember, engine sump and front differential.

Ford has even thought of a worst-case scenario, where the Ranger Raptor gets stranded in the most extreme scenarios. If this was to happen, it has twin rated tow hooks at the front and rear to provide flexible recovery options while driving off‑road, with access to one of the tow hooks if the other is buried, say in thick sand or mud. 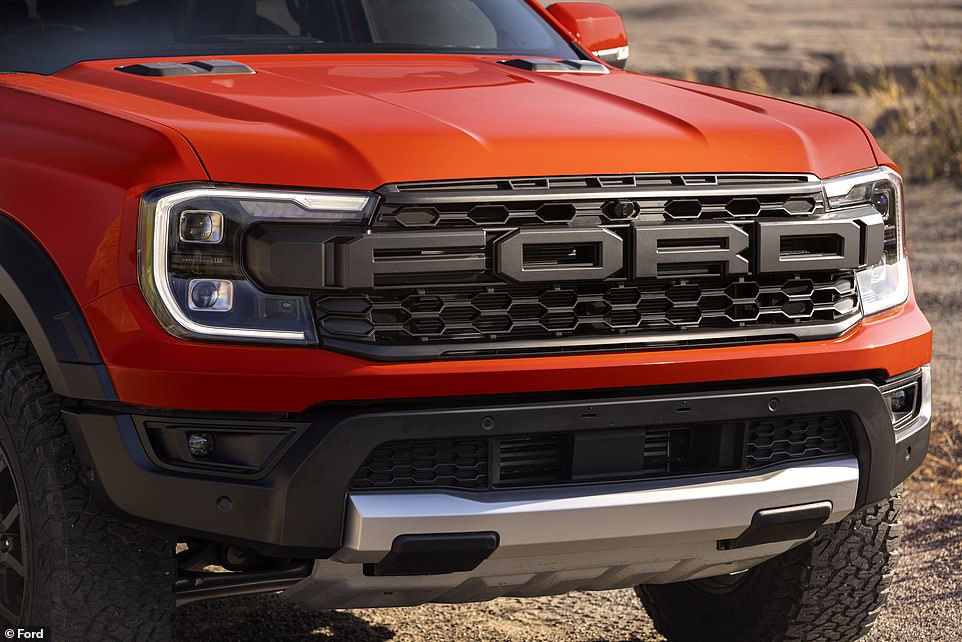 New Matrix LED headlights feature predictive curve light technology, meaning the beam can light up the full extent of a bend as you’re driving around it

8.  It has LED headlights that can beam around bends

Like the standard Ranger, the high-performance Raptor is modelled on the US-market F-150, namely the C-shaped daytime running lights. But for the Raptor, these are upgraded to Matrix LEDs.

These feature predictive curve light technology, meaning the beam can light up the full extent of a bend as you’re driving around it.

The headlights also have glare-free high beam and auto dynamic levelling, which means you won’t blind traffic coming in the opposite direction. 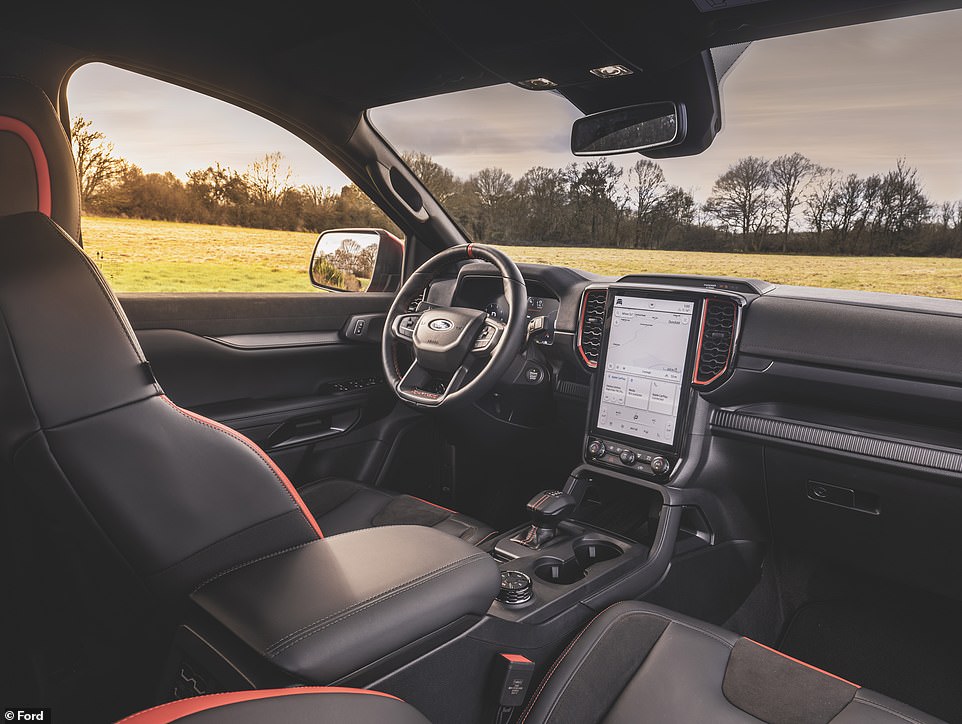 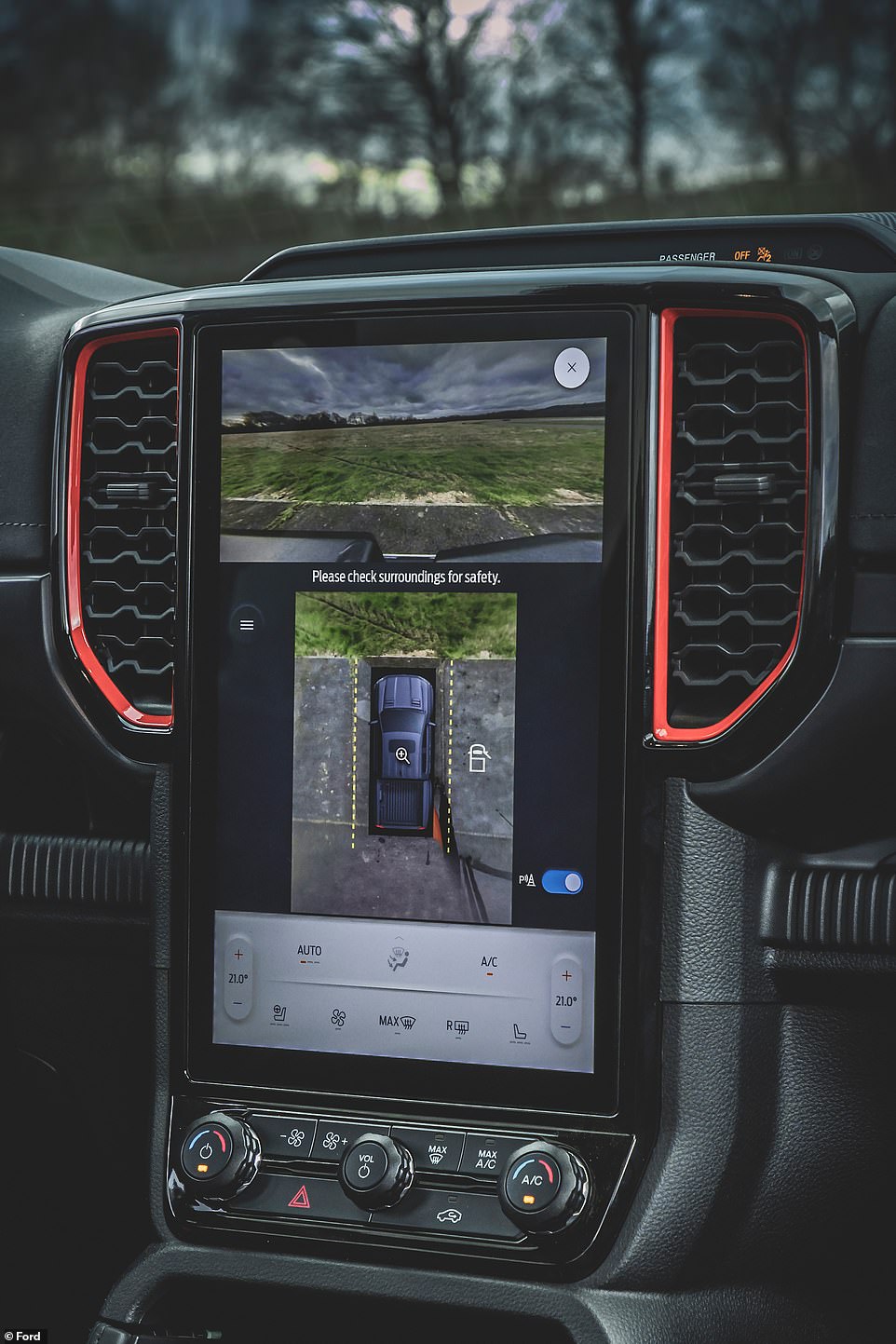 As with all modern Fords, the tech includes the brand’s ‘Sync’ connectivity and entertainment system, which boasts wireless Apple CarPlay and Android Auto 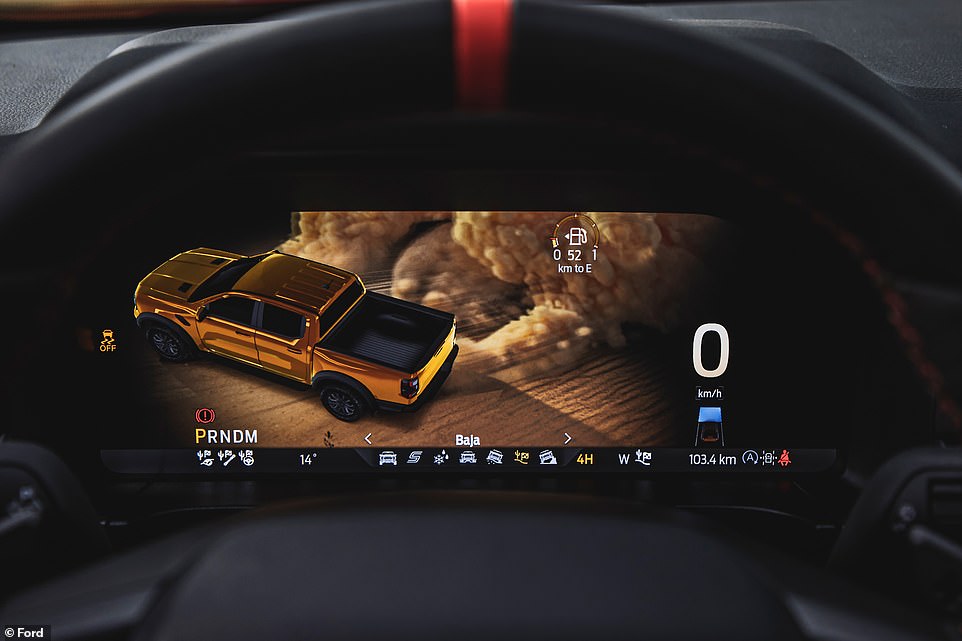 The driver also get this massive 12.4‑inch all-digital widescreen instrument cluster that has adjustable displays – including a Raptor sliding in the sand

9. The infotainment screen is bigger than most iPads

This might be a rugged off-road beast, but it doesn’t do away with creature comforts.

As well as a relatively plush cabin, occupants also benefit from the latest digital technology.

Not only is there a 12.4‑inch all-digital widescreen instrument cluster but also a 12-inch centre touchscreen that’s bigger than most iPads.

As with all modern Fords, the tech includes the brand’s ‘Sync’ connectivity and entertainment system, which boasts wireless Apple CarPlay and Android Auto. Sound performance is pretty impressive too, with a 10-speaker B&O sound system. 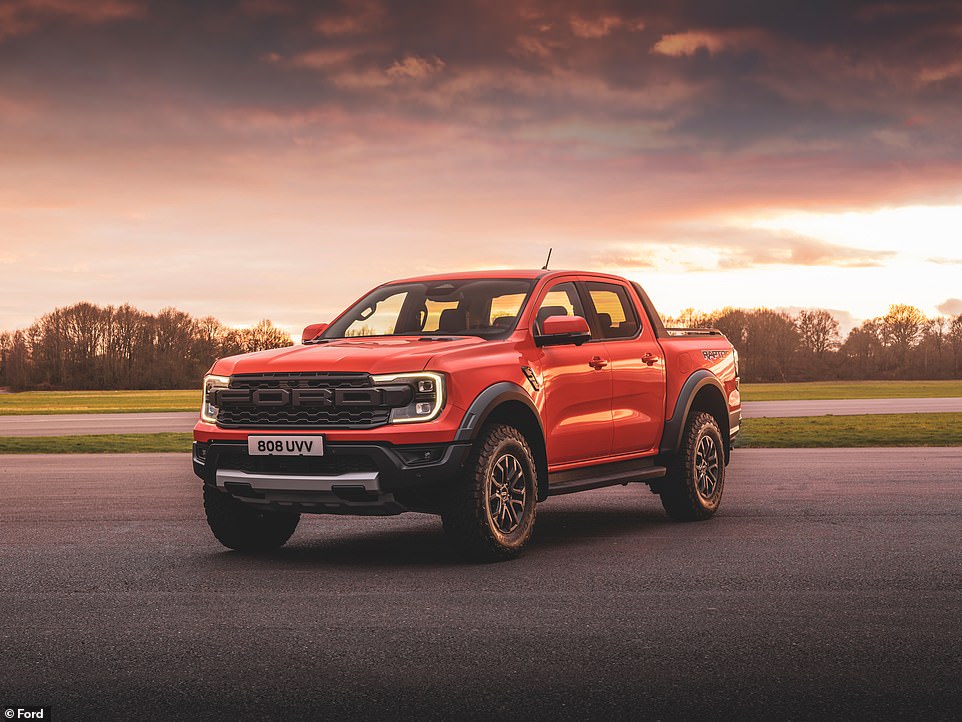 Raptor deliveries are due to start from the fourth quarter of this year, ahead of the standard Ranger’s arrival in early 2023 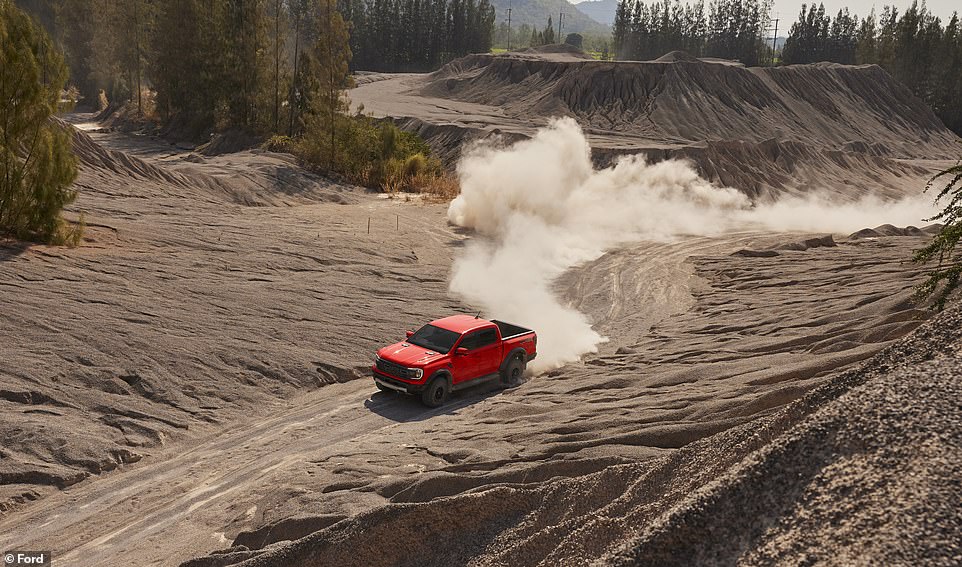 No pricing information has been revealed by Ford, but with the outgoing model costing a smidgen under £50,000, we’d expect the upgraded 2022 pick-up to ring in around the same price point

10. Prices expected to start around £50k with first deliveries before the end of 2022

Despite the standard Ranger being unveiled months ago, the high-performance Raptor will be the first version of the next-generation truck to go on sale in Britain.

Raptor deliveries are due to start from the fourth quarter of this year, ahead of the standard model’s arrival in early 2023.

No pricing information has been revealed by Ford, but with the outgoing model costing a smidgen under £50,000, we’d expect the upgraded 2022 pick-up – including its petrol engine – to breach the £50k price point.