‘Nothing for elderly’: A 3.1% state pension hike is outstripped by inflation 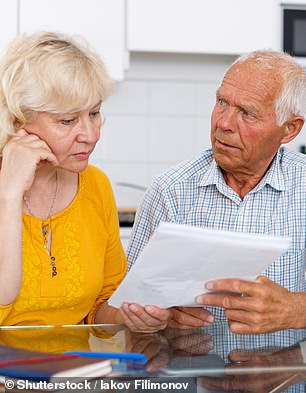 Pensioners left out: No relief from soaring bills in the Chancellor’s statement today, say pension experts

Older people struggling with higher bills received no help from the Chancellor today and will be forced to bump up pension withdrawals to make ends meet, warn experts.

The lack of assistance to the elderly as the prices of essentials soar was condemned by former government ministers.

Meanwhile, government forecasters anticipate a massive increase in ‘pension dipping’ from retirement funds, and a thumping rise in the tax take from older people as a result, note pension industry pundits.

‘There is no relief for pensioners, especially the poorest, who cannot work any more, due to age and infirmity,’ says former Pensions Minister Ros Altmann.

‘The state pension and pension credit will rise by only 3.1 per cent, while inflation has now risen to 6.2 per cent driven by rising basic living costs, and the Office for Budget Responsibility is forecasting that it will increase to 7.4 per cent in the year ahead,’ she adds.

‘Pensioners will have been shocked by the lack of action by the Chancellor to help with the soaring fuel bills they are about to face,’ says Steve Webb, another former Pensions Minister who is now a partner at LCP.

‘But the inflation forecasts suggest that a big state pension rise is likely to happen in April 2023 off the back of high inflation this year.

‘With inflation in the key month of September set to be around 8 per cent based on the latest forecasts, the new state pension will break through the £10,000 barrier next year. But in the meantime pensioners will continue to face a big squeeze on their budgets.’

There is a conspicuous lack of help for pensioners in Chancellor Rishi Sunak’s Spring Statement, says Jon Greer, head of retirement policy at Quilter.

The increase in the National Insurance threshold announced today will not support struggling pensioners as inflation ratchets up to 6.2 per cent, versus the 3.1 per cent rise in the state pension next month, he points out.

‘Most probably won’t have already been planning to install solar panels and heat pumps and many older people either don’t drive or only take short journeys, meaning the cut on fuel duty is unlikely to offer a helping hand.’

Greer says that over-55s may now look to take advantage of pension freedoms to make ends meet in the absence of any help coming from the Chancellor, and notes that the OBR has significantly increased its estimate of the Government’s tax take from people making pension withdrawals.

‘It now expects receipts to be £1.7billion as people clamour to use their pension savings just to make ends meet during this cost-of-living crisis.’

That estimated tax take for 2021-22 is £0.4billion higher than the year before, and £0.5billion more than the OBR expected last October.

‘This is not a temporary spike and sets the expectation that the cost of living crisis will be with us for years to come as people look to their pensions as a bank account to support their day-to-day living costs.

‘Savers who choose to access their pension pots should also be aware of the money purchase annual allowance sting in the tail, which significantly limits how much you can continue to contribute to your pension should you wish to top-up any withdrawals.’ See the box below.

What is the MPAA trap?

People who start tapping pots for any amount over and above their 25 per cent tax free lump sum are only able to put away £4,000 a year and still automatically qualify for tax relief from then onward. Read more here.

Steven Cameron, pensions director at Aegon, says: ‘Pensioners received little in the way of good news from the Chancellor in his mini Budget.

‘There was nothing new in the way of temporary support specifically for this group, and no improvement on the 3.1 per cent increase in the state pension from next month, which is just half the current rate of inflation.

‘Added to this, those above state pension age don’t pay National Insurance on earnings so won’t benefit from the £3,000 increase in the NI threshold.

‘One possible help could have been to offer a bigger increase to the state pension this April in return for a lower rise next April.

‘For example, the Chancellor could have raised this year’s increase by 2.5 per cent to 5.6 per cent to bring it closer to the current rate of inflation, then granting 2.5 per cent less than whatever the triple lock rise would have been next April.’

Melissa Blissett, senior consultant on pay gap analytics at Barnett Waddingham, says: ‘Pensioners and those approaching retirement have been lured with “jam tomorrow” by the Chancellor.

‘Some will benefit from the reduced income tax rate, and when the triple lock returns next year there is likely to be a very healthy increase in pension payments; April 2023’s increase will be based on September’s 2022 CPI figure which is set to be close to 8 per cent according to the OBR.

‘A cynic might note this would be just in time for elections season. In practice though, most pensioners have been left in the dust by the Government. Tax cuts and R&D policies will go little way to protect those in retirement from the spiralling cost of living and rising fuel bills.’

Those approaching retirement should not forgo pension contributions if they can afford them, says Jon Greer, head of retirement policy at Quilter.

‘The Chancellor announced a cut in the basic rate of income tax from 20 per cent to 19 per cent from April 2024, just in time for the next election.

‘This will be of benefit to pensioners, who pay income tax on earnings or pension benefits, but do not pay any National Insurance contributions.’

Putting money into a pension today means you get higher tax relief than when you take it out – 20 per cent vs 19 per cent, says Greer.

harrry
Previous article
ONS: House prices up £2,000 a month over the past year
Next article
Is A Mobile Forbrukslån Right For You