Shell has become the latest major company to sever ties with Russia following the invasion of Ukraine.

The energy giant will ditch its work with Gazprom and pull out of the controversial Nord Stream 2 pipeline as Western powers reel from President Putin’s warmongering in Eastern Europe.

Shell warned that it could take a £2.2billion hit as it laid out a plan to exit a series of projects. 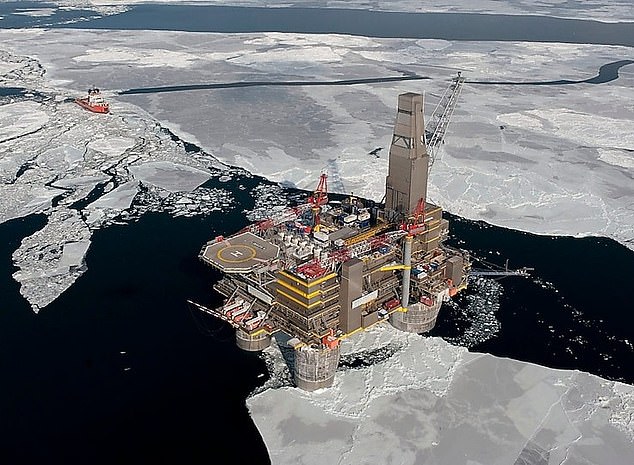 Out of gas: Energy giant Shell is to ditch will ditch its work with Gazprom which includes its 27.5 per cent stake in Sakhalin 2 – a flagship facility in the Russian Far East (pictured)

These include its 27.5 per cent stake in Sakhalin 2 – a flagship facility in the Russian Far East that is majority-owned by Gazprom and produces around 4 per cent of the world’s liquefied natural gas.

Shell’s announcement came a day after BP said that it was cutting ties with Kremlin-backed oil company Rosneft.

BP is now looking to offload its 19.75 per cent stake in Rosneft and current boss Bernard Looney has stepped down from the board.

Shell also said it would end its involvement with the Nord Stream 2 pipeline, which Germany has suspended because of the escalating conflict.

Shell helped to finance Nord Stream 2 – which was meant to double Russian gas imports to Germany – and is thought to have lent more than £600million towards the project.

The oil giant isn’t quitting Russia altogether, however. It has a network of around 400 petrol stations and a lubricants business in the country which it said it intends to keep.

Hours before Shell made the announcement, Business Secretary Kwasi Kwarteng grilled Ben van Beurden about the company’s work in Russia in a phone call.

‘Shell have made the right call to divest from Russia – including Sakhalin II. There is now a strong moral imperative on British companies to isolate Russia.

‘This invasion must be a strategic failure for Putin.’

Van Beurden said: ‘We are shocked by the loss of life in Ukraine, which we deplore, resulting from a senseless act of military aggression which threatens European security.’ 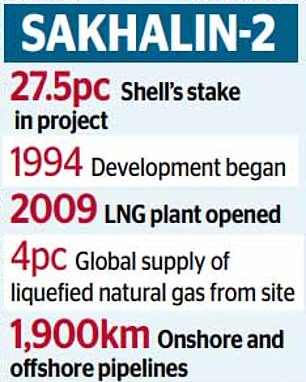 He added: ‘Our decision to exit is one we take with conviction.

He added: ‘Our immediate focus is the safety of our people in Ukraine and supporting our people in Russia.’ The company is also bowing out of two projects in western Siberia, Salym and Gydan.

But it faces the same struggle to find a buyer as BP and other companies keen to escape their Russian investments.

Few, if any, Western firms will be able or willing to buy up Russian assets under the current circumstances.

Experts and politicians including former Labour party leader Ed Miliband had urged Shell to step back from Russia.

Shell’s shares were down by 1.4 per cent, or 28.5p, to 1972p last night even though oil prices rose – suggesting that investors were expecting its exit.

The move could constrain Shell’s finances at a time when van Beurden is trying to turn the company into a global green energy powerhouse, which he insists must be funded with money from its traditional oil and gas business.

In addition to Shell, a slew of companies including the Norwegian oil group Equinor and Daimler Truck cut their connections with Russia.

The calls from Kwarteng for businesses to isolate Russia could pile pressure on companies including Glencore, Total, ExxonMobil and the commodities trader Trafigura.

FTSE 100-listed Glencore, which has suffered a series of ethical scandals, owns a 0.5 per cent stake in Rosneft and 10 per cent of Russian resources firm En+.

Jamie Maddock, equity analyst at Quilter Cheviot, said: ‘While Glencore has a much smaller stake in Rosneft, it is a stake nonetheless.

‘It becomes much harder to justify retaining a stake in the business now BP has taken the decision to offload its ownership.’