Owners of electric cars are falling victim to a new crime wave sweeping the UK. Thieves are stealing the cable required to recharge the cars, then either selling the copper it contains as scrap – or simply selling the cable on the second hand market for up to £200.

Experts predict these thefts could soon dwarf the £10million-a-year cost of replacing more than 10,000 stolen catalytic converters. The sale of electric cars rocketed by 76 per cent last year and there are now more than 400,000 electric vehicles and 750,000 plug-in hybrids on the UK’s roads. By 2030, almost all new cars sold will be electric or hybrid, as new petrol or diesel-only engines are banned.

Charging cables are required to power all electric cars. They can be connected via a plug socket on the car’s side to one of 42,000 external charge points countrywide. These are found at many petrol stations, dedicated charging sites, or on residential streets. Owners usually store the cables in the car boot. 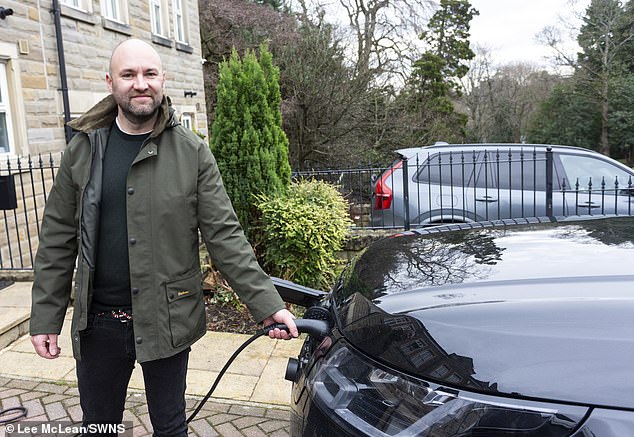 Typically 15ft long, the cables are packed with expensive copper with a scrap metal value of up to £50. Branded replacements can cost up to £700.

The cables are sometimes stolen from the boot, but can also be removed at a charging point if the car is left unattended. Cables are sold to scrap metal dealers, but are more likely to be traded on websites such as eBay and Facebook Marketplace.

Mark Hall is a director of the rubbish removal business divert.co.uk. Although his firm charges for rubbish to be removed from people’s homes or gardens, he says a week rarely goes by without his company receiving a enquiry from someone asking how much it would pay for a car charge cable.

He says: ‘With the ban on petrol and diesel-only cars coming in just eight years, the future for thieves appears electric. Car cable theft is easy money for organised criminal gangs.’

Andrew Gillespie, managing director of charging cable website EV Cable Shop, says it is easy for criminals to steal the cables. He says: ‘All a thief needs to do is unlock a latch when a car is on charge and take the cable. It is straightforward.

‘Even if the cable is locked into the car and charger – known as being ‘tethered’ – it will not stop criminals having a go at wrenching it out or trying to knock it out with a tool such as a club hammer.’ This could lead to an even bigger bill for the hapless motorist.

To beat the criminals, Gillespie suggests investing at least £50 in a heavy-duty plastic sleeved chain to be passed around the cable and through the wheel spokes, then padlocked. He adds: ‘Electric car owners do not immediately think about the value of their chargers or why they should be kept safe under lock and key.’

He also says those who hire an electric car need to be careful, as they would be required to pay for an expensive own-brand replacement.

Trading websites are awash with second-hand charging cables. Though many sellers are acting legally, others may be dealing in stolen goods.

The Mail on Sunday questioned half a dozen sellers on why they had a charger for sale. The second-hand chargers came from a variety of cars, such as a BMW, Mercedes-Benz, Jaguar, Skoda and Toyota Prius – with asking prices ranging from £100 to £200. 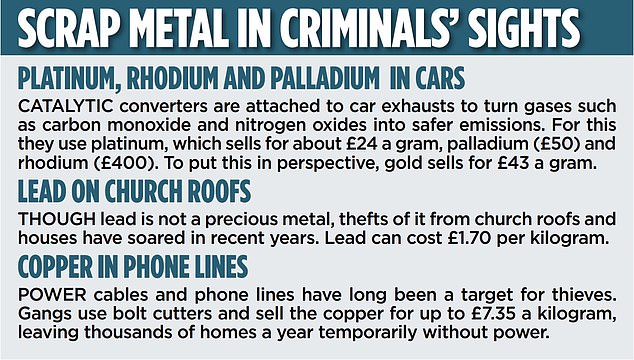 Responses included: ‘I’m selling for a friend; I have no idea why he’s selling.’ And: ‘It came as an extra with the car but I no longer need it.’ Experts expect the theft of charging cables to overtake that of catalytic converters, primarily because they can be stolen without the need for an angle grinder.

An RAC spokesman says: ‘Charging cables are going to be high on the list for opportunist thieves as they are expensive and demand will soar as motorists turn to electric vehicles. When charging a car in public, it is always better to stay by the car rather than wander away.’

There are currently no official figures on cable thefts, but the Association of British Insurers admits it is a growing crime and could lead to a rise in motor insurance premiums.

It says: ‘Vehicle criminals are constantly on the lookout for new opportunities, especially arising from new technology. We would advise electric vehicle owners to be careful.’

A spokesman for the City of London Police says: ‘If a cable is being stored in the car then keep it out of sight – and always get into the habit of locking your vehicle even if you are only going to be away from it for just a moment.’