Oil soared towards $120 a barrel yesterday and the rouble crashed to an all-time low as war in Ukraine continued to send shockwaves through financial markets.

As Russia stepped up the assault on its neighbour, Brent crude rose to $119.84, a level last seen in 2012, before falling back.

At the same time, the rouble crashed to an all-time low as the Russian economy plunged deeper into crisis. 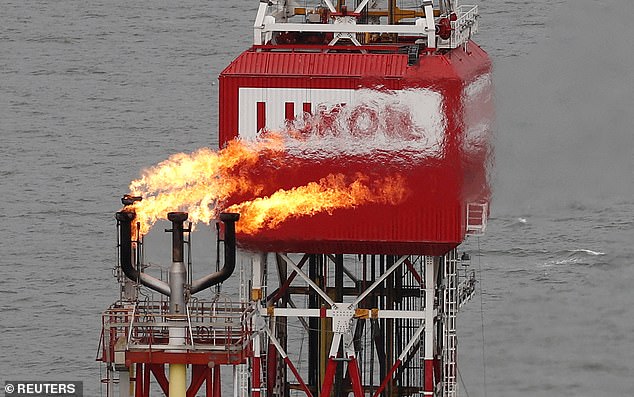 Oil rose to $119.84 a barrel, a level last seen in 2012, before falling back.  Russia normally ships more than seven million barrels per day (Pictured: A Russian oil platform in the Caspian Sea)

Russia competes with Saudi Arabia for the title of biggest crude and refined oil products exporter and ships more than seven million barrels per day (bpd), with about half going to Europe.

Although sanc-tions have steered clear of energy, companies are starting to ‘self-sanction’ and avoid Russian oil. At least ten tankers failed to find buyers on Wednesday.

‘We expect that Russian oil exports will plunge by one million bpd from the indirect impact of sanctions and voluntary actions by companies,’ said Rystad Energy chief executive Jarand Rystad. He said oil prices could go beyond $130 per barrel.

The rally to close to $120 took gains for the year so far to more than 50 per cent and raised fears of further price rises on British forecourts. 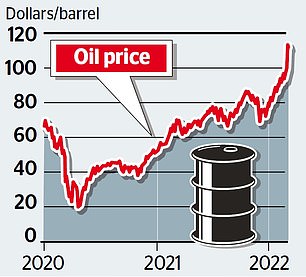 RAC fuel spokesman Simon Williams said: ‘The RAC is now calling on the Treasury to look at an emergency, temporary cut in the VAT rate levied on fuel.’

Oil fell back in later trading amid hopes of a breakthrough in talks to revive an Iran nuclear deal which could see Iranian barrels back on the market.

But RBC Capital analyst Helima Croft warned: ‘The sums entailed would simply be too small to backfill a major Russian disruption.’

The Organization of the Petroleum Exporting Countries, Russia and its allies, known as OPEC+, stuck to a plan for a gradual output rise of 400,000 bpd a month, snubbing consumer calls for more.